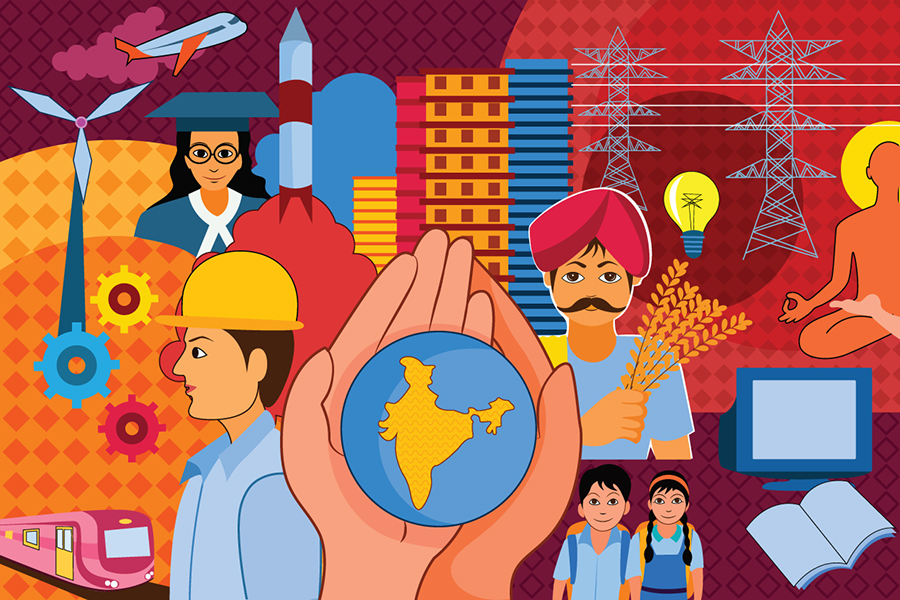 The Indian government recently announced its GDP growth expectation for 2021/22 (the Indian fiscal year ends in March) at 9.2 percent. If realized, this would be a sharp reversal from the -8 percent COVID-19-induced drop in 2020, and likely allow India to claim the mantle of being the world’s fastest-growing major economy in 2021.

This is both heartening and impressive, and all the more so in light of how India was ground zero for the deadly delta variant. The world’s second-largest developing economy had also seen its output growth steadily grind lower since 2016. At the time, many had blamed two major policy errors by the Modi administration—a largely ineffectual demonetization effort in the winter of 2016, and a botched GST rollout the following summer—for short-circuiting an otherwise impressive growth record in the years prior.

But truth be told, whether this blockbuster growth figure is simply a short-term rebound in response to the prior collapse—or whether this upturn represents the dawn of a new era of China-like macroeconomic performance—is a little too early to tell. But the trajectory that India ultimately follows is likely to depend not only on its growth potential (which, give a still-youthful working-age population, ample room for further expansion in educational attainment, and solid sources of investment financing, is remarkably solid), but also on its ability to execute a hitherto untested development model.

Prior to India, most developing countries—especially those in East Asia—relied on a tried-and-tested development strategy: they would rely on high domestic saving (possibly supplemented by external saving from global capital), finance rapid capital accumulation, and supplement this with a large, comparatively low-wage labor force to produce exportable goods for the global market.

This approach had been repeated time and time again: first with Japan in its postwar growth miracle, followed by the so-called Asian Dragons of Hong Kong, Singapore, South Korea, and Taiwan, and then eventually emulated—to varying degrees of success—by the Southeast Asian “Tiger Cubs” such as Indonesia, Malaysia, and Thailand, as well as, of course, China. While the idiosyncrasies surrounding each development story were slightly different, the lynchpin of gradually shifting a low-skilled rural population toward urban manufacturing activity was always there.

This is where India bucks the trend. Despite its abundant population and comparatively high household saving rates, its corporate sector has always lagged in terms of either retaining corporate earnings for reinvestment, or repeatedly attracting international sources of foreign direct investment. Well-known inefficiencies in the Indian financial sector further exacerbate this capital scarcity, and repeated instances of hostility and backpedaling in foreign investor protection laws add further uncertainty to the overall investment climate.

Bereft of complementary capital, India has gone down the route of exporting services instead. The most well-known among these—back-office support functions for finance, and technical support and outsourced coding in information technology—are (by now) world-class and constitute genuine sources of comparative advantage. But it is difficult to imagine exportable services alone being sufficient to drive an export engine necessary to power a $2.6 trillion economy, not to mention supply decent jobs to the millions of underemployed workers drawn from the Indian countryside.

As some have observed, India is an economy that could well be in the throes of premature deindustrialization. In 1980, industry comprised a little less than a quarter of the economy, with services a little more than a third, and the remainder in agriculture. A quarter of a century later, the agriculture share had indeed fallen—to around a fifth—but industry had barely grown (rising by around 3 percent), whereas services were a little more than half of GDP. As of last year, these shares remain roughly the same (if anything, industry has fallen even a little further).

While a shift toward services being the predominant driver of an economy is common fare among advanced economies, this is fairly unprecedented for middle-income countries, of which India remains. This isn’t to say that there is no hope for India to forge a different and distinct growth model; indeed, some recent research suggests that the development of services exports could well spur goods exporting. Even so, we should be clear-eyed about how, in addition to India’s enviable position as the world’s largest democracy housed in a developing country, it is also pursuing an untested path in the economic sphere, as well.