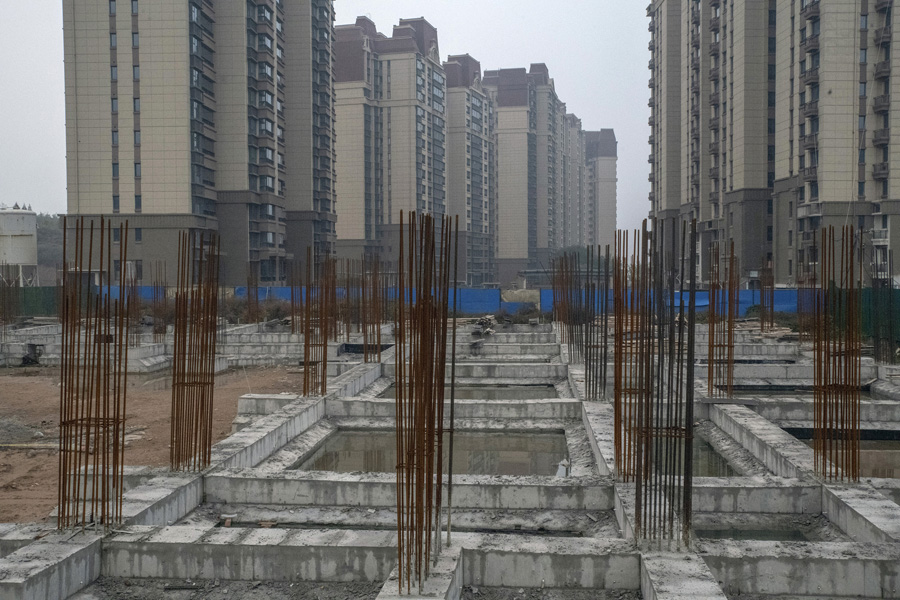 An idle construction site for an Evergrande residential project in Taiyuan, China, and completed buildings behind on Oct. 20, 2021. China Evergrande Group is only the largest and most visible of a lengthening list of real estate developers in China that have run into severe financial difficulty lately. (Gilles Sabrié/The New York Times)

BEIJING — Construction and property sales have slumped. Small businesses have shut because of rising costs and weak sales. Debt-laden local governments are cutting the pay of civil servants.

China’s economy slowed markedly in the final months of last year as government measures to limit real estate speculation hurt other sectors as well. Lockdowns and travel restrictions to contain the coronavirus also dented consumer spending. Stringent regulations on everything from internet businesses to after-school tutoring companies have set off a wave of layoffs.

China’s National Bureau of Statistics said Monday that economic output from October through December was only 4% higher than during the same period a year earlier. That represented a further deceleration from the 4.9% growth in the third quarter, July through September.

The world’s demand for consumer electronics, furniture and other home comforts during the pandemic has kept exports strong, preventing China’s growth from stalling. Over all of last year, China’s economic output was 8.1% higher than in 2020, the government said. But much of the growth was in the first half of last year.

The snapshot of China’s economy, the main locomotive of global growth in the past few years, adds to expectations that the broader world economic outlook is beginning to dim. Making matters worse, the omicron variant of the coronavirus is now starting to spread in China, leading to more restrictions around the country and raising fears of renewed disruption of supply chains.

The slowing economy poses a dilemma for China’s leaders. The measures they have imposed to address income inequality and rein in companies are part of a long-term plan to protect the economy and national security. But officials are wary of causing short-term economic instability, particularly in a year of unusual political importance.

Next month, China hosts the Winter Olympics in Beijing, which will focus an international spotlight on the country’s performance. In the fall, Xi Jinping, China’s leader, is expected to claim a third five-year term at a Communist Party congress.

With growth in his country slowing, demand slackening and debt still at near-record levels, Xi could face some of the biggest economic challenges since Deng Xiaoping began lifting the country out of its Maoist straitjacket four decades ago.