India's exports are growing steadily. Can it fuel a much needed revival of the economy?

The increase in export numbers comes at a time when India's consumption economy, which contributes to two-thirds of growth, is slowing down and is unlikely to revive quickly 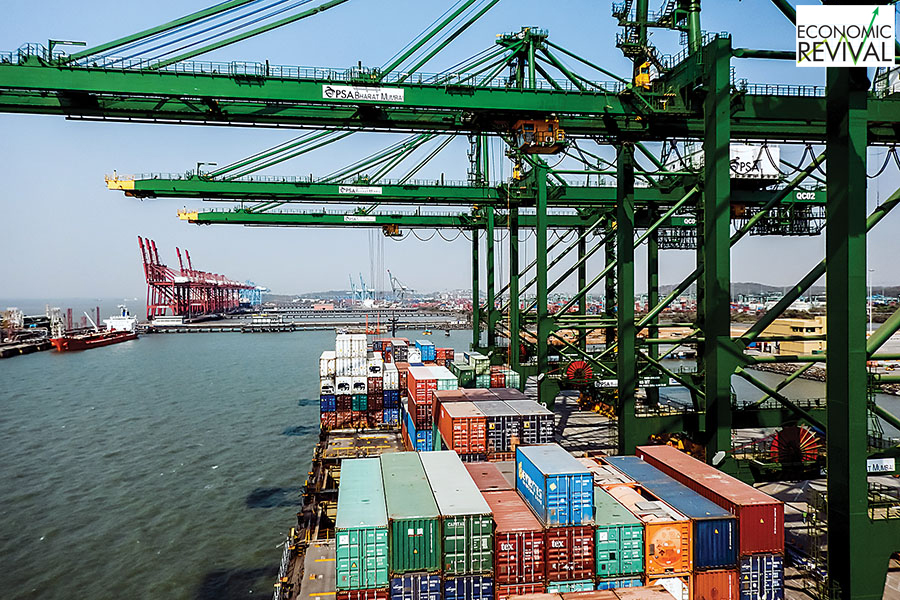 Over the last three months, Indian exporters have benefited from a resurgence of demand in the West
Image: Shutterstock

At textile company Indo Count, the surge in demand has led to it shipping record numbers of beddings to clients across the western world. As demand for textiles remains strong, vice chairman Mohit Jain puts this down to the rise of the ‘homebody’ economy where people staying home are spending more on making their surroundings comfortable.

According to Jain, the initial cyclical spurt in demand on account of restocking and pent-up demand is over. He sees this round as more sustainable. India now has a 50 percent market share in the US market in the home textile space—60 percent for bed linen and 44 percent for towels. “Plants are running to a higher capacity and there are more economies of scale,” he says. “The key here is demand.” The company’s profits have quadrupled to ₹251 crore in the year ended March 2021 and its market cap is up two-and-a-half times to ₹5,000 crore.

The spurt in textile exports is part of a broader jump in exports this fiscal when compared to the same month last fiscal. Over the last five years, India’s exports have averaged $495 billion a year (see table). The jump, which has been sustained since April when compared to the same period last year, begs the question as to whether exports and the thrust to manufacturing could be a significant contributor to growth in the years to come.

The increase in export numbers comes at a time when India’s consumption economy, which contributes to two-thirds of growth, is slowing down and is unlikely to revive quickly. Government spending adds another 10 percent to growth. Investment spending and net exports have been flat and not contributed incrementally to growth over the last five years.

For exports to move the needle, the spurt in both merchandise and service exports would have to be sustained. Manufacturing, which accounts for 14 to 15 percent of growth, would then see a revival. There are some initial signs that the thrust on manufacturing could bear fruit.

Manufacturing: Lack of consistency in policy
Indian manufacturing has been hobbled by labour shortages, land availability, logistics costs and inconsistency on the taxation front. This has resulted in businesses being unable to plan for the long term. A manufacturing outfit may draw up a business plan only to see its assumptions go awry on account of extra costs or a higher tax rate or input tax credit not being passed on. Manufacturing the world over operates on economies of scale and Ebitda margins of no more than 15 percent. This lack of consistency in policy has led to a loss of investments from both Indian entrepreneurs and global manufacturers.

So far, the government has sought to address this by working on the ease of doing business. How long did it take to register a company, how long did tax filing take or how long did the enforcement of contracts take.

“Now they’ve moved from ease of doing business to addressing the cost of doing business,” says Sachchidanand Shukla, chief economist at Mahindra & Mahindra. This has been a paradigm shift for the industry.

In this year’s Budget, the finance minister announced an outlay of ₹1.97 lakh crore for production-linked incentive (PLI) schemes. The government estimates that the minimum production, as a result of these PLI schemes, will be $500 billion over the next five years, according to the Press Information Bureau. In addition to PLI, in August, the government notified the Rebate of State and Central Taxes and Levies (RoSCTL) that would refund levies until March 2024. There is also the Remission of Duties and Taxes on Exported Products that has yet to be notified.

According to Jain of Indo Count, a problem investors had was calibrating earnings as earlier refund schemes were notified for a year. Now these longer-term measures would give more clarity to entrepreneurs planning to make investments in manufacturing.

Over the last three months, Indian exporters have benefited from a resurgence of demand in the West as high vaccination rates coupled with income support during the pandemic have kept demand elevated. This, coupled with the “pattern of the second wave that has seen infections spike in Malaysia, Indonesia, Thailand and Vietnam, have seen buyers switch away from producers in these countries”, says Abheek Barua, chief economist at HDFC Bank. He’s unsure whether this switch could be long lasting.

Categories like auto ancillaries and engineering goods have benefited as a result. There are also specific categories like women’s uppers or home textiles where India has built a niche. The demand for software exports continues to be strong as companies have upped spending on digitisation of their businesses.

But the longer term trajectory for exports is uncertain as Barua points out that there is as yet no evidence of buyers adopting a China-plus-one strategy and Indian exporters benefiting from it. He would like to wait before he makes a final assessment. “This is so far a cyclical uptick and I haven’t seen anything structural,” he says.

He says that areas where India has exported more are the ones that have been voluntarily ceded by China mainly on pollution grounds. Categories like specialty chemicals and pharma APIs, which have seen a rise in exports. Steel is another area where China, Japan and Europe have made commitments to cut production and are following through on those announcements.

Another aspect of the surge in export numbers has been the fact that the growth may have been primarily value- and not volume-led, points out Shukla. The pandemic has seen a boom in commodity prices, and exports of petroleum products or iron ore would have attracted significantly higher prices than last year. Take the case of iron and steel. In the last fiscal, India exported worth ₹89,931 crore ($11.99 billion). In April and May 2021, that number was ₹23,089 crore ($3.07 billion) or 25 percent of the annual number last year. This is primarily on account of the fact that steel prices are up four-fold since last year.

For now, the big question remains whether manufacturing could provide the incremental growth the economy needs over the next three years. The answer to that is unclear as there has been no change in labour laws at the central level. The four labour codes passed by Parliament have yet to be notified. Manufacturers, in addition to tax clarity, also seek the ability to hire and fire at will. While exports have fared well when compared to the same period last year, they are not up meaningfully when looked at on an annualised five-year rolling basis.

This could change meaningfully once the PLI scheme investments kick in in areas as diverse as autos, textiles, pharmaceuticals, telecom equipment, solar modules and specialty steel. Expect India to make some gains there once those investments are made, and plants are up and running. Exporters now also have clarity till 2024 on the refund of taxes and this should see them make quick brownfield investments to take advantage of the pent-up demand in western economies. It would be fair to expect a slow and steady uptick in export numbers and manufacturing employment to take care of a slowdown in consumption-led growth in the economy.

Tweets by @forbesindia
'We will hunt you down': Biden vows to avenge Afghan attack
Forbes plans to go public in $630 million SPAC deal