Rupa Garments: The Inside Story 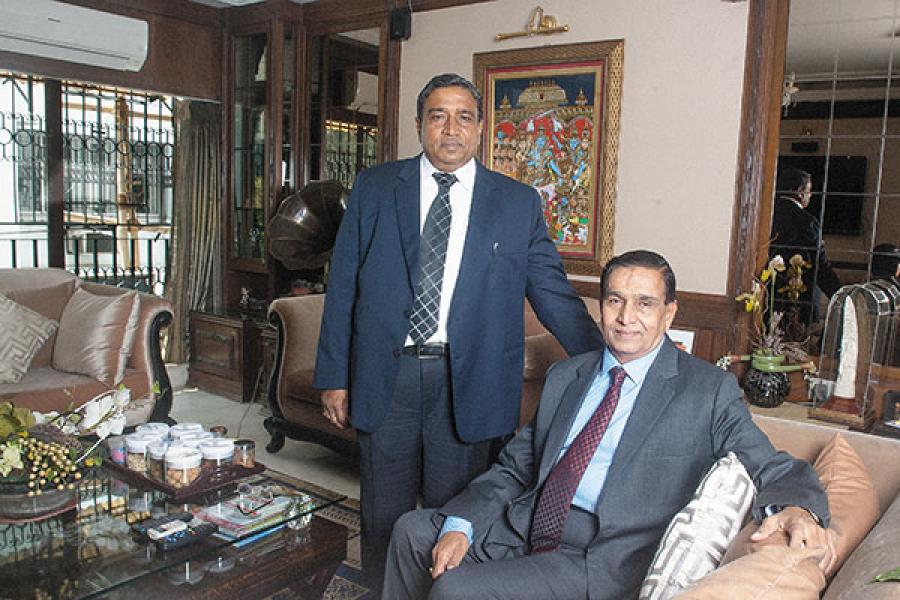 Walk into Rupa’s corporate office opposite Kolkata’s Tata Centre and one gets the unmistakable impression of this being a company on the move. Boxes lie strewn everywhere. New products are being planned. Marketing strategies are getting honed. Existing lines are set to be refurbished. Distribution channels are being expanded across the country. The shortest path between two desks is a zig-zag and one has to squeeze past. There’s so much to do that, on most days, employees eat at their workstation.

Guiding the company through this rapid phase of expansion are the patriarchs: Prahlad Rai Agarwala, 74, and younger brother Kunj Bihari Agarwala, 64 (popularly known as PR and KB). Both come across as thorough businessmen who have spent their lives in the trade. As KB explains, “What is business? It is mere adjustment. You have to improvise and see how best your goods sell.” 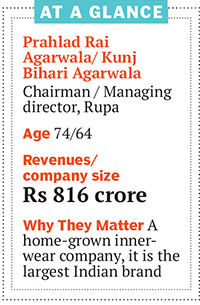 It is through this adjustment that Rupa has emerged as a leading player in the country’s innerwear business. Its story has been one of constantly seizing market opportunities and relentlessly increasing distribution. Sure, with rising purchasing power the market has also grown considerably, but the category is littered with names, many of whom are now also-rans. Remember Dora? Or VIP? Or Lux? They’re still around but none have been able to claim the same spot as Rupa. Higher up the value chain, there’s Jockey (which has been licenced to Page Industries in India) but in the mass market, Rupa is the undisputed leader.

Over the years, Rupa has followed a successful brand flanking strategy. For instance, while its core brand Rupa dominates the mass market, MacroMan takes a stab at the premium end. This ‘premiumisation’ strategy is behind the five-fold surge in profits to Rs 61 crore in the last five years. During the same period, revenues doubled to Rs 816 crore. As a bold PR Agarwala explains, they hope to take the company to Rs 1,500 crore in the next three years. That would mean a compounded growth of 20 percent—higher than the 14 percent they’ve seen in the last three years. While it would no doubt be a tough ask, many industry watchers believe the company has more than a chance to get there.

Early Days
In 1968, the 19-year-old PR started what is today known as Rupa. Like most Marwaris from Rajasthan’s Shekhawati region, his father, too, had chosen to migrate. “Where there is a lack of something, people always move out to better their lot,” he says. In Sikar district, there wouldn’t be any rain for years and there was no agriculture to speak of. The Agarwala family chose to set up base in Kolkata with PR’s father becoming a trader.

PR had intended to start college in Kolkata but almost simultaneously entered the business. However, being a restless soul, he wasn’t satisfied with being a part of a mere trading operation. In 1962, he got into manufacturing, setting up Binod Hosiery. But it proved to be unsuccessful. In 1968, Rupa was born.

In the late 1960s, there was one brand, Dora, that dominated the market. When PR went to sell Rupa, “no one would even allow us to sit in their shops lest they be seen with a competitor”. As he went from store to store, PR realised that he would have to gently persuade wholesalers to stock his product. He allowed extended credit periods to whoever agreed to stock his product. But, in three years, the situation changed, as Dora decided to enter the retail market and left the field vacant for others. Five years on, Rupa’s turnover touched a crore.

But, in a controlled economy growing at an average of 3 percent, there was only so much the company could sell. As younger brother KB says, “The company couldn’t expand the market beyond a point, as people barely had purchasing power.” During these years Rupa perfected its manufacturing model. Unlike Page Industries, it outsources most of its production to third parties. The company is responsible for brand building and marketing.

It was in the 1980s that Rupa received a boost when it went national with its advertising. The company pioneered advertising in movie cassettes that sold pre-recorded Bollywood films and saw an immediate uptick in demand. “That convinced us that advertising works and it is not money that goes down the drain,” says KB. The elder brother turns nostalgic when he talks about the “Yeh aaram ka mamla hai” tagline. “All my friends would say ‘Yeh aaram aa gaya.’” The next big boost came when the company took advertising spots on Aaj Tak in the late 1990s. That truly gave the brand a national footprint. At present, Rupa spends 8 percent of sales on advertising.

The Road Ahead
Like all consumer businesses, Rupa has had a good decade. The company, which is listed on the Bombay and National Stock Exchanges, trades at a healthy 22 times earnings. But, as both brothers admit, a public listing has brought its own set of pressures. Investors, for one, want a clear growth path set out. They are keen to see more data on what is selling and, more importantly, why it is selling. Potential investors want management professionalised and the company is looking for a professional CEO.

The younger generation, five of whom have joined the company, are tasked with creating new brands. “We have to ensure that the pie keeps growing,” says Vikas Agarwala, who is part of the second generation and has spent 13 years in the business. (In order to ensure they don’t step on each others’ toes, they’re given complete responsibility of a particular brand.)

Going forward, the company realises it will have to do a lot more on brand building, for consumers are beginning to demand better products. Also, their marketing strategy has to change as social media and online sales are playing a key role. “They will have to make sure that online sales keep increasing exponentially, as this category is going to move online very rapidly,” says BL Mittal, chairman of Microsec group and an advisor to Rupa.

Last, and most importantly, as the company strives to move up the value chain, it will have to make changes to its business model. With premium products, the company will have to take control of the manufacturing process as it can’t rely on outsourcing production due to quality concerns.

But that should be easy for a company where the patriarchs make sure they wear every product for three months before it hits the market.

Tweets by @forbesindia
Art & Architecture: The Treasures of Marwariland
For Rajasthan Patrika, it is Readers Above Advertisers