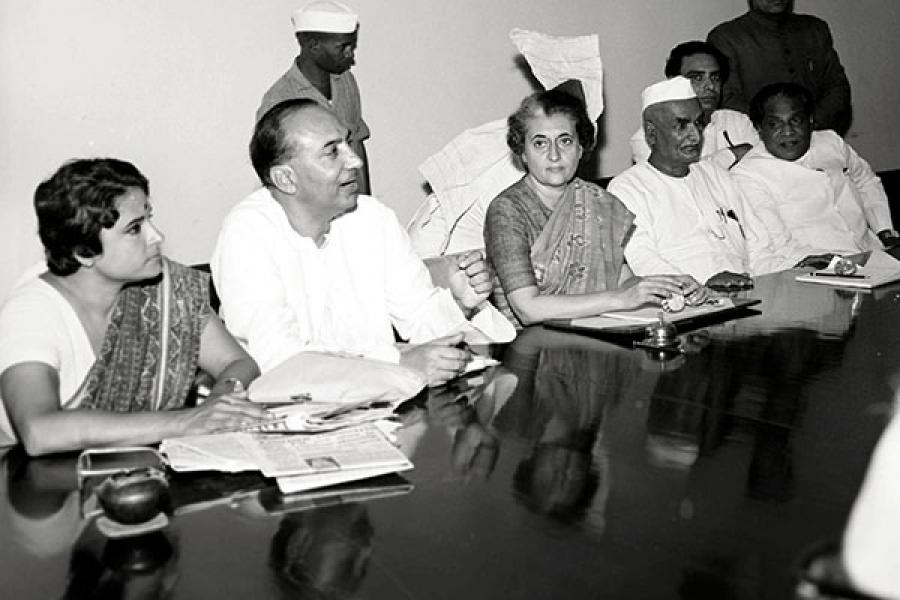 Image: THE TIMES OF INDIA GROUP. © BCCL. ALL RIGHTS RESERVED
Indira Gandhi’s decision to go ahead with the nationalisation of banks helped her gain support. Here, the former PM is seen during a Congress parliamentary party meeting in New Delhi on July 17, 1969

In the end, it was politics that trumped economics in 1969 when Prime Minister Indira Gandhi nationalised 14 banks. She had been under pressure from older, more experienced hands within the party (known as the Syndicate) who wanted banks to be nationalised to neutralise them. Their argument was that the banking sector was not working rapidly enough in spreading credit availability across the country.

Nationalising banks had become the rallying point for a lot of agitations and giving in to the demand allowed Indira Gandhi to strengthen support. Yet, the speed with which the nationalisation of banks took place surprised many.

Morarji Desai, who was finance minister then, remained adamant and refused to go ahead with the proposal. “Recent experience does not suggest that large banks need to be taken over so as to do something they have not been doing,” he wrote. However, on July 19, 1969, the Banking Companies (Acquisition and Transfer of Undertakings) Ordinance resulted in the ownership of 14 banks being transferred to the state. This made Desai’s position in the cabinet untenable. Indira Gandhi, however, offered that he could stay on as deputy prime minister, but Desai declined (it was later called a political masterstroke).

The 14 banks controlled 70 percent of the country’s deposits. In 1980, six more banks were nationalised. (Imperial Bank had been nationalised in 1955, making it the State Bank of India.)

While there is no doubt that the nationalisation of banks led to credit being channelised to agriculture and small and medium industries, the Act also resulted in a lot of delegated legislation. Banks had to reserve as much as 40 percent of credit to the priority sectors (agriculture and small and medium industries). The expansion of branches in rural areas was particularly noteworthy. The figure rose from 8,261 in 1969 to a whopping 65,521 in 2000. The pace has slowed since then and, as the principal shareholder, the government made a negative return on its investment.

Perhaps, that is the reason why PJ Nayak, chairperson of the Reserve Bank of India-appointed Nayak Committee, says: “It would be better if government banks are brought under the Companies Act.” That would allow them to improve their functioning while still meeting the objectives for which they were nationalised in the first place.

Tweets by @forbesindia
Can Narendra Modi change this weak state and enhance its capacity to act?
National Animal: Tiger