The pandemic came in the middle of the formalisation of the economy, which has impacted the unorganised sector disproportionately. The reopening of economy may not automatically lead to spending recovering, say experts 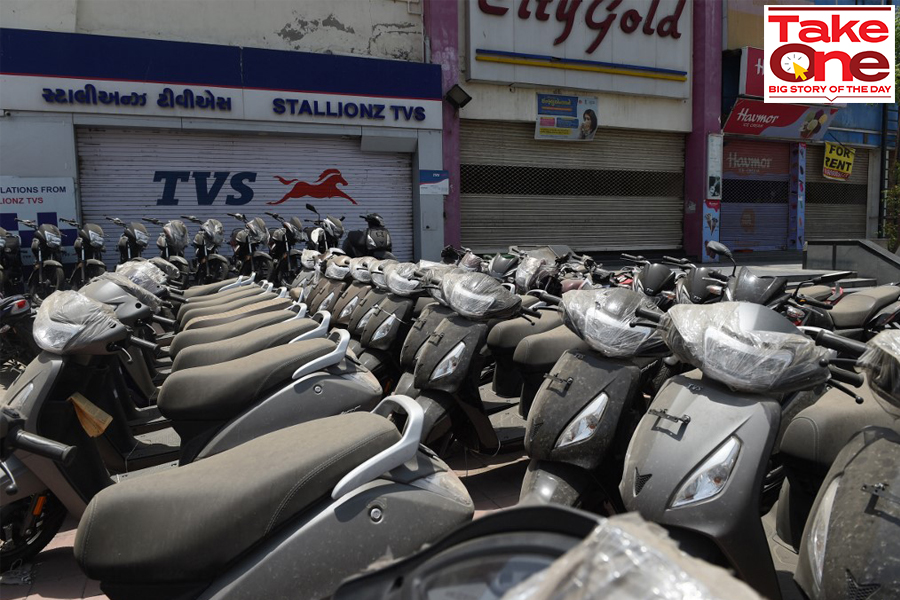 Over the past decade, companies associated with India’s consumption economy have been stock market darlings. They’ve seen valuations rise rapidly even as earnings growth has, at times, been tepid. During the pandemic, investors largely ignored a period of lost earnings in these companies. The hope is that it would be business as usual once Covid-19 memories fade, vaccinations take place and markets open up. The equity market has, for the most part, not discriminated when it comes to businesses like hospitality, aviation and cinemas, which could see a longer-term impact, and consumer staples or autos where the numbers have held up better.  The Nifty Consumption Index at 6,414 is 24.9 percent higher than its February 2020 level. At 10,267 the Nifty Auto Index is 22 percent higher. This is while earnings growth for their constituents has been tepid or declined. Both have tracked the Sensex, which at 52,653 is 25 percent higher.

But what if the Indian consumption story were to settle on a lower base post pandemic? How would the markets react then? Could an expectation of slower growth result in valuations coming off? India’s consumption trajectory is notoriously hard to forecast even in the best of times. Rural demand picks up when urban slows. Slowing salary growth has been replaced by zero-cost EMIs and personal loans. And while certain products may be consumed less on aggregate, the basket has only grown in the last decade. Coming up with a reasonable estimate post-pandemic is hard to do not least because estimates of private final consumption vary on account of a low base in 2020. But since consumption spending makes up about 60 percent of economic growth, a fall in spending could have a negative impact if government spending, capex and exports don’t make up the shortfall. There are, however, some signs that not all spending may return post pandemic. “We are a bit hesitant in assuming that reopening of the economy is equal to growth or accelerated activity by default,” says Sanjay Mookim, head of research at JP Morgan. According to him, while the visibility of opening up around Diwali is high, it cannot automatically point to spending recovering.  Mookim also points out that the Indian economy was not in a great place going into the pandemic. At 4 percent, 2019-20 was the worst growth year of the last decade. And with the NBFC crisis, implementation of the Insolvency and Bankruptcy Code and the view that debt is bad for business, there was severe ‘risk aversion’. “If I was risk-averse in December 2019, why will I suddenly want to spend?” he asks.  There is data to back up Mookim’s claim. The RBI Consumer Confidence Survey, conducted once every two months, has seen confidence among India’s consuming class trending lower. The latest survey data released in June saw the Current Situation Index fall to its lowest point since December 2016 and the Future Expectations Index moved to pessimistic territory for the second time since the start of the pandemic (see graphic). 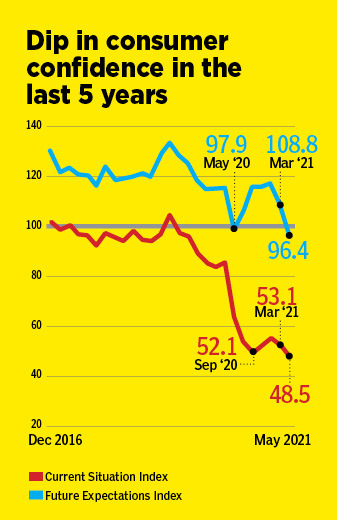 How does this lack of confidence manifest itself on the demand side? Shashank Srivastava, Senior Executive Director, Marketing & Sales at Maruti Suzuki, has seen several cycles. While he points out that sentiment can change very soon, he’s also seen what marketers call ‘telescoping of demand’. So a person who would buy a large car would down trade to a smaller car. An entry-level car buyer would go in for a used car and a used-car buyer would go for a two-wheeler. “As of now, it is not our base case that post pandemic, demand will settle at a lower level than pre-pandemic demand,” he says.  He points to the fact that there is an increased preference for personal mobility as well as the salaried class has largely been unaffected. Still, there has been a slowing of demand from small businessmen and the industry may well register three years of negative growth since 2019. In seeing demand for high-end cars fall, Srivastava has carefully segmented India’s consumption pyramid. This points to a lowering of demand for discretionary products. So while a person would buy an entry-level car, he or she wouldn’t want to spend for a higher-end variant. “We are in the camp of weaker consumption for a while, particularly on the discretionary side,” says Venugopal Garre, managing director at Bernstein. He points out that demand for staples has largely been unaffected, but the ‘willingness to show off’ has been impacted.  India’s staples basket has seen companies post sales increases and profits. The Nifty FMCG Index at 36,565 is up by 21 percent since February 2020. Hindustan Unilever’s profits in the last 12 months are up by 19 percent while Marico and Dabur posted increases of 12 and 12 percent, respectively.

The pandemic also came smack in the middle of the formalisation of the Indian economy, which has impacted the unorganised sector disproportionately. In a sign that larger companies are doing well, the first quarter of FY22 saw direct tax collections rise to Rs1.86 lakh crore—a 100 percent growth over the same period last year. (It was Rs1.01 lakh crore in Q1FY20.) While this formalisation is good in the long run, in the short run, it has reduced demand for low-end scooters and motorcycles… demand (when measured through monthly registrations) which never recovered to pre-pandemic levels, according to Garre. In fact, June 2021 sales numbers for Bajaj Auto and Hero MotoCorp were 40 percent lower than June 2019 numbers.  For now, a key question is how could markets react if consumption ticks downward once restrictions on movement are lifted significantly? Forecasting share prices is hard, but a few pointers could begin to emerge. First, consumption could shift to newer categories and companies, according to Bhavesh Shah, head, consumer and health care, Equirus Capital. “There is a new consuming class from smaller towns that haven’t been catered to,” he says.  Second, the index composition of large consumer companies is likely to be resilient. Hindustan Unilever, Britannia, Asian Paints and others in the consumer basket are likely to prove resilient even if demand falls. Autos represented by Maruti, Mahindra & Mahindra, Tata Motors, Bajaj Auto and Hero MotoCorp could see some pressure. But there are new emerging profit pools that could take their space. Metals have done well since 2020 and while it’s not clear whether a new super cycle has started, it’s fair to assume an extended upcycle. Pharma and IT are also growing in double digits and could take some valuation away from consumer-facing companies. One reason why valuations of consumer businesses have held up is the lack of options in the market for an Indian investor. It was the only sector in the last decade that provided earnings growth and good cash flows, which in time resulted in a high price multiple. With no clear replacement, investors were shy in putting money to work elsewhere. If the new crop of internet listings in India’s market shows earnings traction, money could move. “Once the tech companies (Zomato, Flipkart, Reliance Jio and Retail) start to list and come on to the Index, there could be more options,” says Garre of Bernstein.

Tweets by @forbes_india
Covid-19 test kits are getting more innovative in India. Here's how
The battles to come over the benefits of working from home