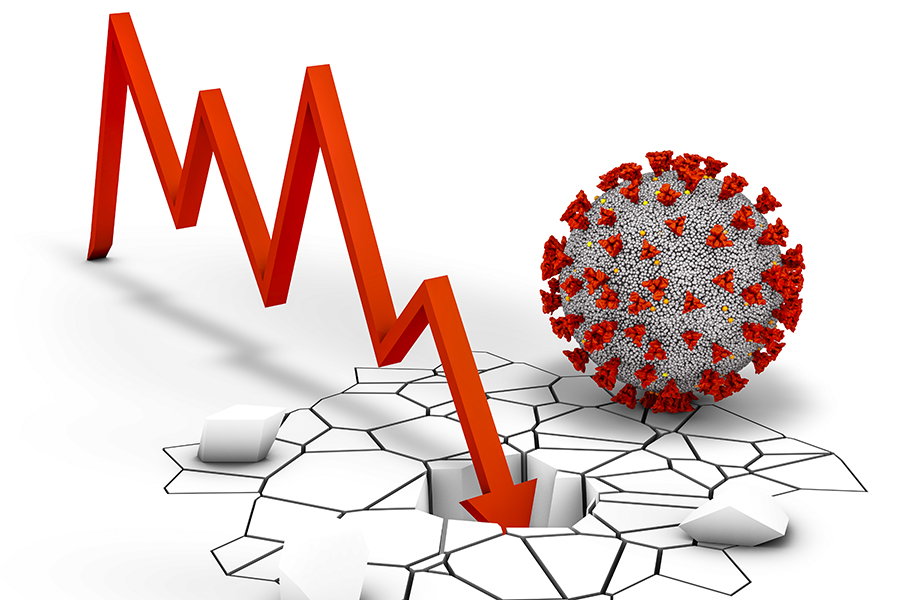 
India’s first quarter growth numbers, which showed the economy contracting 23.9 percent, made it to the top of newspapers, television debates and social media. Commentators spoke about how long it would take for us to get out of this slump, economists began work on predicting the full year decline and consumers took stock of what the news could mean for their jobs and personal finances. But the sharp decline in growth masked an important fact—every forecast had predicted a fall in excess of 20 percent. With a hard lockdown starting March 25 and a shutting down of both supply and demand, the numbers were relatively easy to forecast. As both leading and lagging indicators fell, and infection numbers rose, predicting the quantum of the decline was possible. Most models had forecast 100,000 cases to be reached between August and October.

Now, with nearly half the fiscal nearly over, the uncertainty has dramatically increased. With cases still rising and a peak nowhere in sight, it remains to be seen where full year growth will settle. Growth momentum is slow and pent up buying for April and May and some part of June is largely over. The last fortnight has seen a slew of downgrades with the range settling at a contraction of between 8 and 11.5 percent. But even these numbers could see further revisions as the case load grows and the spatial spread increases. As of September 17, India has the second highest incidence of Covid-19 after the United States, at 5.12 million cases. Local administrations across India have imposed intermittent lockdowns with no prior warning, throwing the supply chain out of gear. For the auto industry, which operates a just-in-time model, this has at times meant that critical parts may be unavailable. Consumer companies may be unable to produce the right pack sizes needed. And government projects, the only part of the economy that recorded growth in the first quarter, would take longer to complete. The supply side disruptions have led to a spike in retail inflation. In August, the number stood at 6.69 percent. “The risk to our [growth] number is very closely tied to the medical outcome,” says Vishrut Rana, economist, Asia Pacific at S&P Global Ratings. S&P Global forecasts that the Indian economy will now grow at -9 percent for the full financial year. The rating agency’s forecasts are based on a vaccine being widely available by the second half of 2021. Sachchidanand Shukla, chief economist at Mahindra and Mahindra, points to economists becoming like equity analysts and rushing to downgrade growth after each quarterly number is released. “It is better to work with a forecast range than a specific number,” he says. His growth decline range for FY21 is between 8 and 10 percent.  What has clearly caught India off guard is the lack of health infrastructure in smaller towns. Oxygen availability remains a key challenge: “India's health infrastructure capacity to deal with the pandemic is not as efficient as other East Asian countries. Countries like Hong Kong, Korea, Singapore have had some experience in dealing with similar viruses, so they had some infrastructure and government responses were more fine-tuned. But this was the first time for India,” says Sonal Varma, chief economist for India and Asia ex-Japan, Nomura. Two-speed economy
This once-in-a-lifetime event has created its own problems. “No economic forecasting model has confronted this kind of situation and every forecast comes with a large error bank,” says Pranjul Bhandari, chief India economist at HSBC. The bank forecasts India to return to an 80 to 85 percent normalcy in the September-ended quarter, which improves to 92 percent by FY21 year-end. But several data points show a mixed picture. PMI Manufacturing started to improve in August as production commenced in factories across some states, but services data continued to be weak at 41.8 levels in August. The reason for this confusion is that India is now a two-speed economy—one segment is gaining while another contracting and if these are added up, there is only flattish growth. The benchmark stock market indices have risen 10 percent since July while the real economy data has fallen sharply. Data for rural India is exciting—agricultural growth improved in Q1FY21 and sowing area for kharif crops rose—but urban India is not faring well due to job losses; the formal sector is gaining market share while the informal sector is not, and the manufacturing sector is gaining but services is not. These differences rarely last for a long time as there are interconnected linkages in the economy and convergences take place. Once this happens, growth in an aggregate could plateau out.
Economists and fund managers Forbes India spoke to offered a range of shapes that would emerge as India’s economic recovery commences (see box below). The only clarity that emerged from all this is that achieving pre-Covid-19 growth is a fair way away. 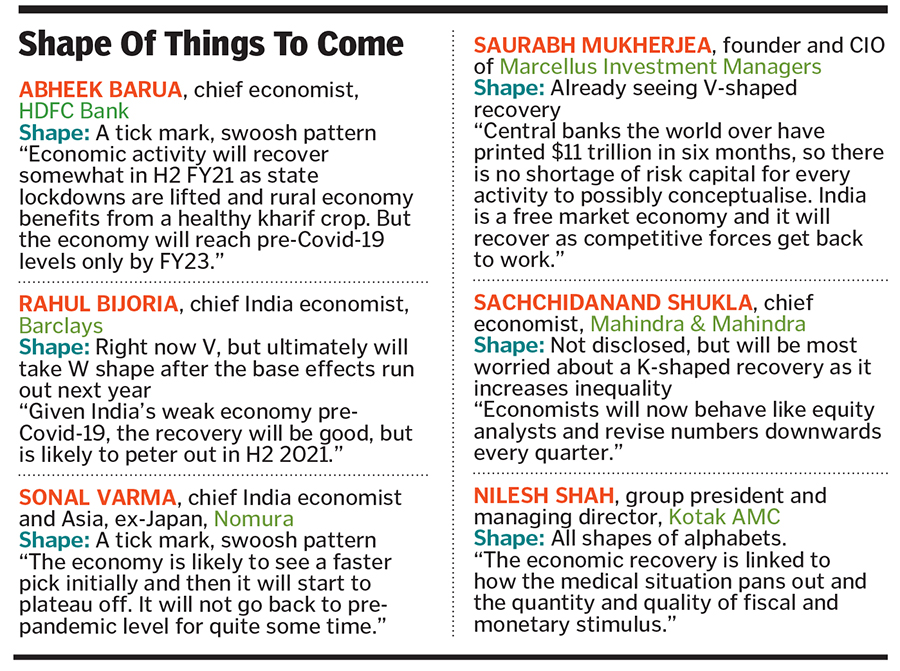 That is because health ministry data each day is reflecting the fact that the pandemic’s spread will not be restricted to urban India. With numbers indicating a spread of Covid-19 in interior parts of Uttar Pradesh and Bihar where healthcare services are limited, the impact of the pandemic—in terms of morbidity and mortality—has gone up. “The ability to bring the number of cases under control because of the dispersion to areas where healthcare is limited has added to the uncertainty to predicting the economy and its path ahead,” says Abheek Barua, chief India economist at HDFC Bank. The deeper—and underlying—impact of the pandemic is not just on weakening economic growth data; it also starts to affect the potential growth projection for a country. Potential growth scarred
As the pace of actual growth slows, so does the potential growth for the country.  The reason behind this is that the investment cycle has also been affected, which has a direct correlation with the potential growth of a country. Expect banks, which had just begun to emerge from the NPA cycle, to be saddled with a new set of bad loans. “The concern is that we are going to see a change in human behaviour towards uncertainty, consumption, payment habits, online retailing. How deep will this problem and its impact on the economy will be difficult to predict at this stage,” says Barua. HSBC’s Bhandari also agrees. “Prior to the 2008 financial crisis, India’s potential growth, led by demographic advantages, was pegged at 7.5 to 8 percent. It has already started to slow and pre-pandemic it was at 6 percent and through this pandemic and post-pandemic, we feel it will be at 5 percent. This will be the big scar the pandemic will leave behind,” says Pranjul Bhandari.

Nomura’s Varma has also lowered India’s potential growth lower at “around 6 percent or even lower”, since either industries are shutting down or workers are permanently losing jobs. “There will be some permanent impact due to this,” she says. This is being reflected by the employment data. The Centre for Monitoring Indian Economy (CMIE), in its September 3 economic outlook column says: “Employment in August 2020 was 10.7 million lower than it was in August 2019. It continued to remain lower than in any month in the pre-lockdown period since at least January 2016, when CMIE started measuring labour statistics directly,” said CMIE’s managing director and CEO Mahesh Vyas. Pulling the economy out of the slump will require targeted spending. There could be a temporary cut in the goods and services tax to spur consumption. Or an increase in public projects. A temporary cut in personal income taxes could also do the trick. But most economists agreed that these measures will only have the desired impact once the infection rate is brought under control. Meanwhile, they’re furiously revising their forecasts downwards. WHAT YOU SAID Forbes India ran a poll across the website, Twitter and LinkedIn, with the following question: