Many economists believe that increased work from home will last because it can raise the productivity of employees, thanks in part to fewer pointless meetings, less distraction and, most of all, a lack of commuting 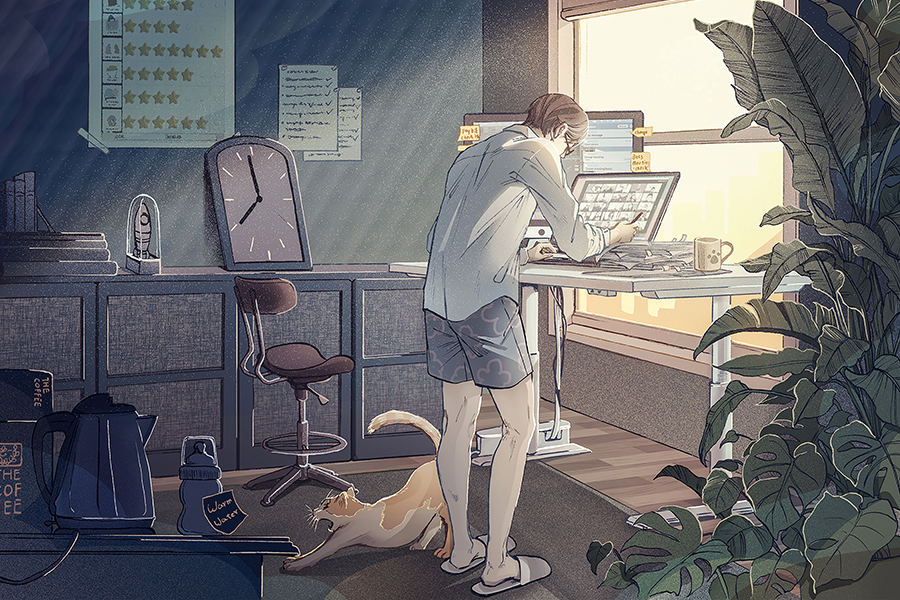 Not having to commute was the equivalent of a big bonus for many employees this year — but, in the future, bosses may expect more hours in exchange for remote work, an economist says. Image: Danlin Zhang/The New York Times

Millions of Americans have gotten a taste of working from home during the pandemic, and, boy, have they liked it.  Almost two-thirds of U.S. workers in a McKinsey survey at the start of the year said they wanted to work from home at least three days a week when the pandemic was over.  But battles are coming. People tend to think the fights will be over whether employers will allow remote work in the future. But a more vexing struggle may be over whether employers take most or all of these newfound benefits for themselves — not by prohibiting remote work but by expecting more hours from employees once the labor market is not as favorable to workers as it is right now.

Yes, some employers will probably fight the remote work trend. David Solomon, Goldman Sachs CEO, called remote work an “aberration,” and the firm’s bankers returned to the office in June. Across town, James Gorman, Morgan Stanley CEO, announced that his company’s employees would return by September and said, “If you want to get paid New York rates, you work in New York.” But more frequently, employers seem desperate to find workers and unlikely to want to anger them. The Labor Department reported that the number of open positions reached a record of 9.2 million in May. With offers of signing bonuses, higher wages and expanded benefits, many workers are in the driver’s seat right now. It is easy to see employers agreeing to these workers’ desires. Indeed, many commentators have declared that the United States is entering a “golden age” for remote work.  Many economists believe that increased work from home will last because it can raise the productivity of employees, thanks in part to fewer pointless meetings, less distraction and, most of all, a lack of commuting.  Think about how big a deal this is for a typical worker. The saved gasoline and forgone restaurant meals, work clothes and dry cleaning sessions can add up to thousands of dollars a year.  Skipping the commute is the biggest prize of all.  According to the Census Bureau, Americans spent, on average, a record 55.2 minutes a day commuting in 2019, before the pandemic. One in 10 spent more than two hours a day traveling to and from work. In dollar terms, not having to commute five to 10 hours per week is like getting a 10%-20% raise. For someone with average hourly earnings in 2021 (over $30), that time is worth $7,000-$15,000 per year. Looked at another way, the monetary value of the saved commuting time would be one of the biggest tax cuts the middle class had ever received. If your pay is higher than average or your commute is longer, your benefit is worth even more.  No wonder so many people want to work from home.  But will workers who get to stay home receive the full value of this bounty, or will employers take it for themselves?  It is not hard to see how employers could. With all the commute time freed up, what is to stop them from simply asking employees to work longer from home — to prepare that report before the meeting starts in the morning or to answer emails or contact clients or file those forms at all hours of the day or night? Blurring the lines between work and the rest of life does not have to benefit workers in the end. Indeed, it was the thing that worried people about working from home before the pandemic began.  Economists call this an “incidence” question: who ultimately benefits from a windfall. It is just like a tax incidence question: Economists routinely analyze whether consumers or sellers truly end up paying when, say, a state raises its sales tax.  The first rule of incidence is that it depends on the conditions in the marketplace. The incidence of the working-from-home bounty will depend on whether labor remains scarce over the long run and on how powerful the employers are. Who needs the other side more? If workers have many options and can quit jobs that encroach on their time, they will tend to keep the bounty. If employers can choose among lots of workers, working from home may end up being much less favorable than it first seems.  The job market seems tight right now, and if employers put extra burdens on workers, it would probably be a serious error. They would have a hard time attracting people and would probably face a wave of resignations. But will that still be true in a few years, when things are back to “normal?”  The last 40 years of wage growth in the United States provide a note of caution. For decades, median pay tracked average worker productivity — the output generated by the typical worker — quite closely. Then, starting in the 1970s, this correlation began to break down. From 1979-2019, the average productivity of workers rose 72%, but median pay rose less than one-quarter of that: only 17%. There is considerable debate among economists about why pay and productivity seem to have diverged. Some think the relationship remains strong despite the shift in the general aggregate numbers. Some cite one or more of these factors: globalization, technological change or a change in the balance of bargaining power due to the declining strength of unions or the rising concentration of employers.  Beyond the subtleties, though, the basic issue is simple. Corporations claim a greater share of the national economy than ever before. If the last 40 years of productivity growth ended up benefiting shareholders and corporate profits more than it did wages, the same thing could very well happen with the newfound productivity benefits and time savings of working from home.  So now may be the perfect time to savor the little things — reading the newspaper in your pajamas, having an extra cup of coffee and simply not having to deal with traffic. Just know that even if you are not wearing real pants, your employer may soon be telling you to get back to work.