Maruti: Why small is big, once again

As consumers downtrade and first-time buyers view cars as an antidote to public transport in a pandemic, Maruti gets back to what it would do best: Selling minis 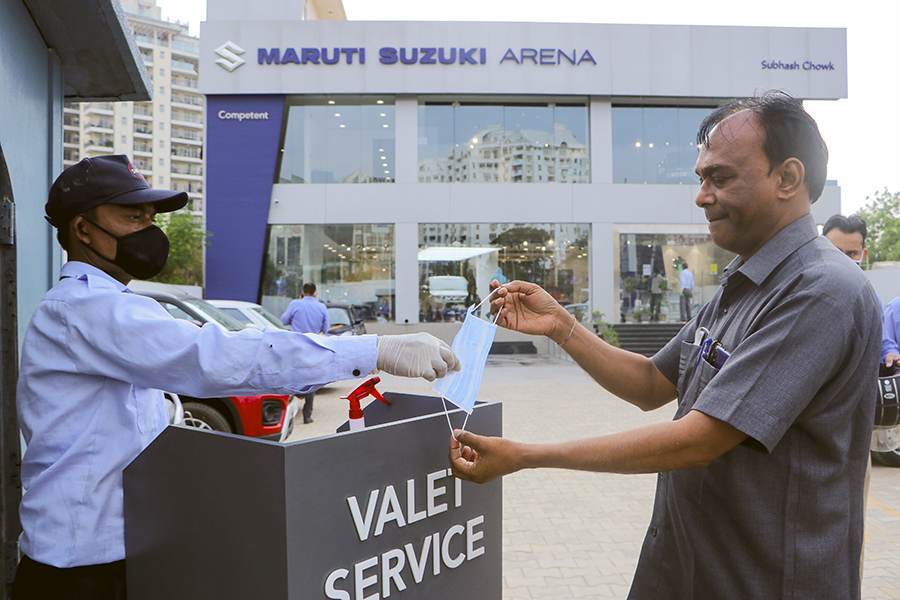 Mahesh Patel curbed his ‘desire’ at the right time. “I was keen to buy a sedan in March,” says the 27-year-old HR (human resource) manager at a shipping firm in Ahmedabad, Gujarat. The plan was simple. Make a down payment of ₹1 lakh, and take an auto loan of ₹6 lakh to drive home in a gleaming blue Maruti Dzire. There was only one glitch. Though the loan got approved on March 21, the nation went into a lockdown two days later because of the coronavirus pandemic. The plan got stalled for a month.

In May came another shocker. Hit by Covid-19, Patel’s firm cut his salary by 30 percent. Dejected, the HR executive bought a little S-Presso for over ₹4 lakh. “I downgraded my desire, not my dream,” he says. A small car, he adds, is the new normal.

Meanwhile, in Delhi last month, Saurabh Saxena too slashed his budget, and intent. The travel agent had been planning for a year to buy the S-Cross, an SUV from the Maruti stable. However, the 30-year-old ended up buying the Ignis, a compact SUV that’s almost half the price of the S-Cross. Reason: His business went for a toss because of the coronavirus and subsequent lockdowns, and dipping into the cash reserves to buy a car seemed outrageous. Covid, he says, has been devastating for travel and tourism. Saxena still mustered the courage to buy a car. “I needed one to commute. You can’t book a taxi and travel now,” he says, expressing his concerns about sharing a car and using public transport.

Cut to July. Maruti Suzuki, India’s biggest four-wheeler maker, posted sales of 108,064 units, a sequential growth of a staggering 88.2 percent over June. While April was a washout for the entire auto industry, a truncated May helped sell a paltry 18,539 units. Comparisons with the previous year in a new normal may be futile up to a point, yet Maruti’s July sales are a little under 1.1 percent compared to July 2019. The auto bellwether reported its first quarterly loss (April-June) since listing in 2003. 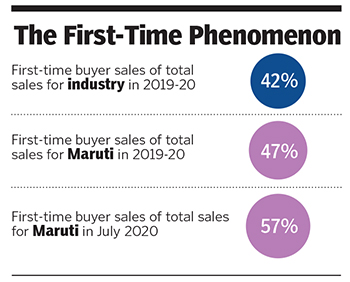 For Maruti, July also ushered in a couple of ‘small’ changes. The mini segment, comprising the Alto and S Presso, posted sales of 17,258 units, a jump of 49.1 percent over the same period last year. Add sales of compact cars, which include Wagon R, Swift, Celerio and Ignis, and the carmaker logged in 68,787 units, just 0.4 percent lower than in the July of 2019. “Last year, people had written off small cars. Now they are back,” says Shashank Srivastava, executive director for marketing and sales at Maruti Suzuki. With consumers downtrading and more first-time buyers looking for an affordable car, the trend of an uptick in small cars is likely to gather pace.

The U-turn towards small
cars is turning out to be one of the unintended positives of the ongoing pandemic. Mini sales had fallen by 32.9 percent in fiscal 2020, and by 13.6 percent a year before. Compact sales had plunged by 9.7 percent and increased by 16.5 percent, respectively. For Maruti, growth in the mini and entry-level compact segments spells good news as they make up over 70 percent of the sales. “We are quite strong in small cars. So we will focus on such models,” says Srivastava, adding that rural markets are performing better than their urban counterparts. Rural percentage to sales, he points out, has increased from 38 percent to 40 percent. The small car revival is being aided by two contradictory forces at play. First, people are viewing private transport as an antidote to public transport. At the same time, incomes have got slashed, and businesses have been hit badly. “So people will buy a more affordable car,” says Srivastava, adding that over 80 percent of car sales in India are through finance. Downtrading to small cars will also bring down the EMIs. The trend, he adds, will also have a rub off on the used-car business. “While the demand is high, supply is an issue as people are holding on to their cars,” he says. As discretionary car buyers take a back seat, first-time buyers are up in numbers. “They are buying for functionality. They need it,” he adds.

Covid-19, reckon auto analysts, has dealt a sucker punch to big cars. “Socialising has come to a stop. The coronavirus has taken the fun out of life,” avers Murad Ali Baig, a veteran auto analyst. The trend, he lets on, is going to stay firm over the next few quarters. The market over the next few months, Baig stresses, will mostly see buyers who need a car to commute. “And for commuting, the basic model serves the purpose. Nobody is buying to flaunt,” he adds. 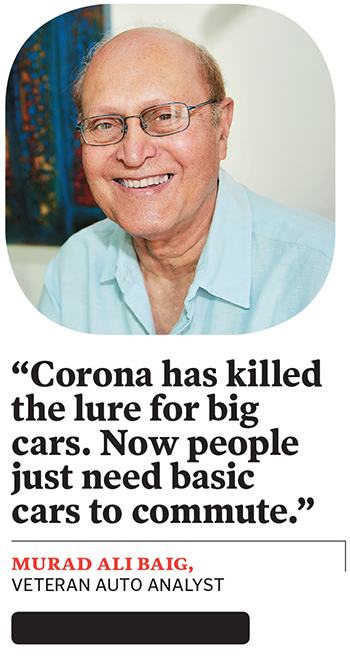 Srivastava, for his part, contends that India’s biggest carmaker knows how to make most of the demand, as well as lure new buyers. To begin with, Maruti has launched innovative financing plans such as balloon EMIs (small EMIs to begin with, followed by bulk payment), letting buyers skip EMIs for a few months, or step-up EMIs (small EMIs to begin with and then a gradual increase). Then there is a new asset-free business model—subscription—that Maruti is piloting in Bengaluru and Gurugram. Rolled out last month, it allows users to take cars on short lease for two to five years. While this frees them from owning the car, it also caters to the need of an increasingly large number of users who don’t want to take a loan. “It’s convenient... calls for a zero down-payment, and the car is available on just a monthly payment,” says Srivastava, adding that 1,000 users have come on board in just month. The carmaker is planning to take the model to other cities. “Imagine using the same model for used cars,” he adds.

Spinny, an online used car retailing platform, has also seen the trend of consumers downtrading and gravitating towards small cars. “There is a jump in the demand for small cars between ₹3 lakh and ₹5 lakh since May,” contends founder Niraj Singh. Over the next few months, he avers, more consumers will opt for entry-level hatchbacks and used cars. “Small is set to become big again,” he adds.

For Maruti, a big rebound may clearly begin with small gains.