Most airlines are on the verge of crash-landing as the likes of SpiceJet, IndiGo and GoAir face acute losses due to the economic slowdown and Covid-induced lockdowns 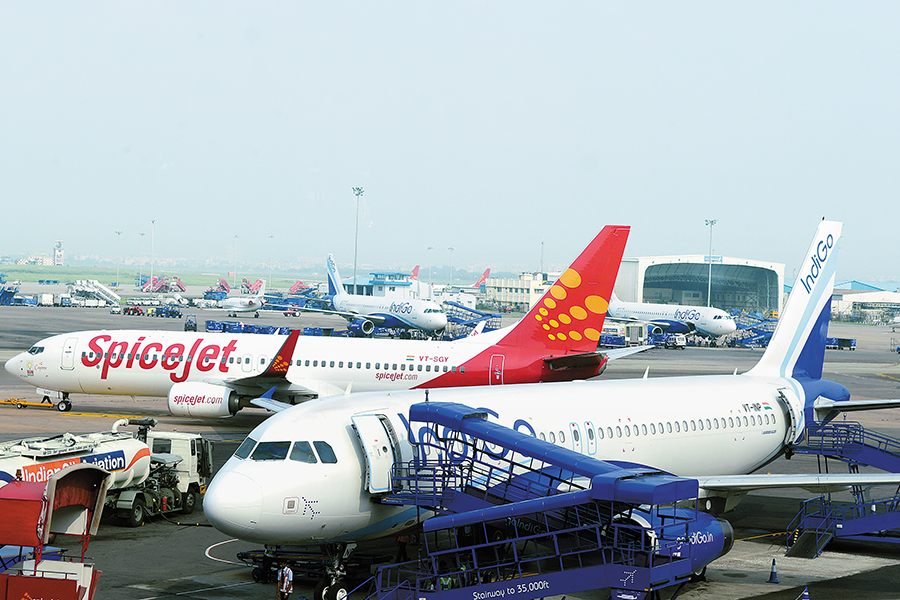 Barring Air India, if there is an Indian airline that runs into turbulence often, it is SpiceJet.

Since its founding in 2004, the Gurugram-headquartered airline has changed hands a few times and has run into massive losses regularly, even being on the verge of shutting down, before staging remarkable turnarounds. This year isn’t any different . In the wake of the economic slowdown and the Covid-19 crisis, SpiceJet finds itself in familiar territory with mounting losses and net worth eroding significantly.

What is worrisome, however, is that like 2014—when SpiceJet stalled operations before a new promotor stepped in—the airline’s net worth has entered into negative territory at ₹1,579.2 crore as of March 31. “The company has incurred a net loss during the current and previous year, and its current liabilities exceeded its current assets in the balance sheet to date. These conditions indicate the existence of a material uncertainty that may cast significant doubt about the airline’s ability to continue as a going concern,” says SR Batliboi and Associates Llp, the company’s auditors, which had been raising similar concerns during the past quarters.

However, this time, it isn’t just SpiceJet that seems to be on the verge of crash-landing. The aviation sector itself is in the doldrums due to the impact of the coronavirus pandemic, among other factors.

IndiGo, India’s largest airline by market share and fleet size, reported a net loss of ₹2,844.3 crore for the quarter ended June 30. It had posted a net profit of ₹1,203.1 crore in the corresponding quarter last year. Revenue from operations plunged by over 91 percent to ₹766.7 crore during the quarter.

“The aviation industry is going through a crisis of survival and, therefore, our cash balance remains our number one priority. However, we also recognise that major disruptions offer companies opportunities for improvement in product, customer preference, costs and employee engagement. We have built a strong team that is working on multiple fronts to ensure that we emerge from this crisis stronger than ever,” says Ronojoy Dutta, CEO of IndiGo.

It may, however, be easier said than done. “We cannot say with certainty when the aviation sector will be back to where it was,” says Mahantesh Sabarad, head of retail research at SBICAP Securities, the stockbroking arm of State Bank of India. “The only option was a bailout from the government, but that is unlikely with the government itself struggling with an airline. And, like many other sectors, the government is only likely to offer liquidity measures either through fiscal or monetary policies.”

Over the past few months, most airlines, including the Tata-owned Vistara, GoAir and AirAsia, have been hit hard as air travel came to a halt because of the Covid-19-induced lockdowns. GoAir’s overall debt was up by 6 percent sequentially to ₹1,891 crore in the June-ended quarter while bank balance nearly halved to ₹72.5 crore during the same period, according to rating agency India Ratings. The Tata group, meanwhile, has infused fresh equity into Vistara.

“With temporary suspension of operations during the nationwide lockdown due to Covid-19, there was a long period of no revenues that led to depleting cash reserves, while some of the significant expenses and fixed costs continued,” a spokesperson for Vistara tells Forbes India. “This has resulted in a severe financial impact on all the players, including Vistara. At present, demand for air travel is sluggish, especially with states imposing their respective travel restrictions and quarantine requirements. However, we believe that demand will return in a graded manner.”

Running airlines in India is an expensive affair with high fixed costs. While fuel accounts for nearly 40 percent, lease charges comprise some 30 percent. Maintenance and operations cost around another 20 percent. The ongoing liquidity crunch across airlines means that the industry is at, what aviation consultancy firm CAPA calls, a “breaking point”. “The record quarterly loss of $380 million posted by IndiGo in Q1 FY20 is consistent with CAPA India’s earlier projection of a consolidated industry loss of $1.5-1.75 billion. With Q2 largely a washout due to poor demand, the industry is at a breaking point,” CAPA India wrote on Twitter.

In June, the Centre allowed domestic airlines to operate with 45 percent capacity. Earlier, when flights resumed on May 25, one-third capacity was permitted. Since then, the number of flights departed has gradually increased from 416 on Day 1 to 890 on July 31. “For July, the average daily departures were 780, significantly lower than the average daily departures of 2,845 in July 2019, though better than 723 in June 2020,” research firm ICRA says. “The average number of passengers per flight during July was 86 against an average of 134 passengers per flight in July 2019.”

For now, airlines are relying on cost reductions at their organisations, including significant layoffs and pay cuts in addition to some moratoriums from lessors. While the government-controlled Air India had planned layoffs, it later resorted to slashing allowances of employees by up to 50 percent. Last month, IndiGo, India’s only cash-rich airline, decided to lay off about 10 percent of its 24,000-odd employees to tide over the downturn. Its employee cost in FY20 was ₹4,395.4 crore.

“I was a big believer in long-term planning… that has now been turned on its head. We’re now focusing on the next two months,” Dutta of IndiGo had said during the Forbes One CEO Club Digital Leadership series in June. “We’ve thrown out old management practices to conserve cash, as cash is king amid the pandemic. There are over-built entities in the aviation industry. The Covid-19 crisis will push them to become lean, creating breathing space for Indian players that have earlier struggled.”

According to the International Air Transport Association (IATA), 2020 is the worst year in aviation history, and airlines in the Asia-Pacific region alone are expected to report losses to the tune of $29 billion. Indian carriers are estimated to lose revenues of $11.61 billion during 2020 compared with 2019, and this is expected to impact 3.06 million jobs. “On average, every day of this year will add $230 million to industry losses. In total that’s a loss of $84.3 billion,” Alexandre de Juniac, IATA’s director general and CEO, said in a statement.

The ongoing crisis could spell the death knell for some airlines. “Apart from IndiGo, which is cash-rich, and Vistara, which has deep promoter funding, it doesn’t look good for the others. Air India has a firm government backing, which is why it even went back on the plan to let go of some people,” says a former senior executive at an airline. “The others may not shut down immediately, but even after measures such as cutting salaries and moratoriums from lessors, it will be a tough fight for survival.”

The Airports Authority of India had put SpiceJet operations across the country on a cash-and-carry basis before revoking it. Under this, airlines have to pay daily, instead of each month, for facilities they use at airports such as route navigation, parking costs and landing charges. The airline, however, is confident about survival. “We are generating adequate cash flows to cover our cost of operations,” says a spokesperson. “Boeing compensation (for grounding Boeing 737 Max aircraft over safety reasons) will further boost our finances. Our cargo operations have done exceptionally well. SpiceJet has operated 500 charter flights in the last two months. We have restructured our lease fixed costs and...payments are also being made as per the restructured schedule.”

A customer survey concluded by Vistara in June revealed that 65 percent of the respondents were expected to take their next Vistara flight before December. “The entire industry has come together to rebuild passenger confidence in flying, which is showing positive signs and helping fuel demand,” says the Vistara spokesperson.

For now, the aviation industry, which has seen bloodbaths over the past few decades, seems to be tiding the turbulence. But in all likelihood, it’s only a few months from crashlanding. “The industry’s financial challenges will become increasingly apparent from September-October,” CAPA India said in a statement. “Promoters, bankers, private equity and the government are all unwilling to provide support given demand risk and uncertainty.”