The National Company Law Tribunal report card is not looking good: Recovery rate for resolutions is at a three-year low and average time taken for the resolution process is rising. But with the coming of Bad Bank and persisting problem of bad loans, the need for NCLT cannot be denied 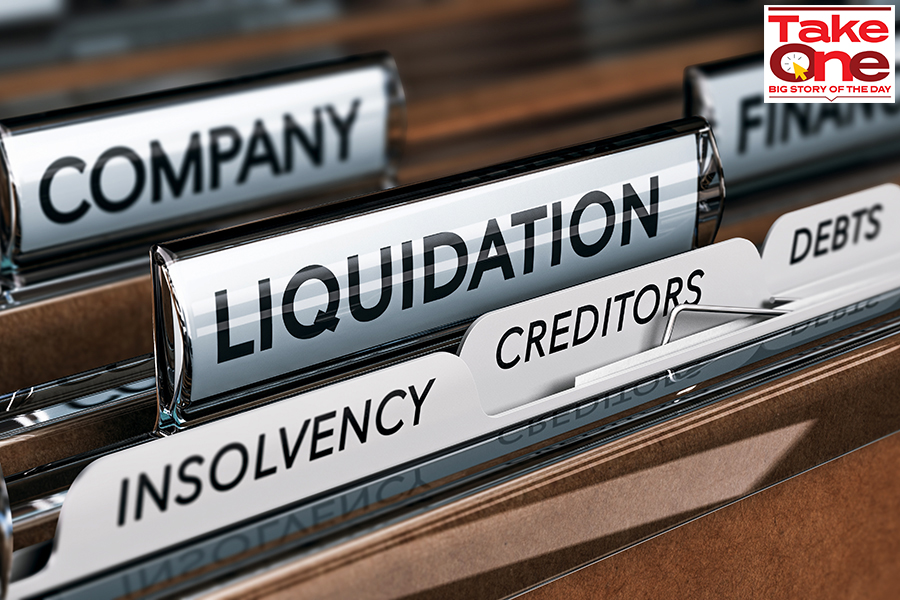 With the coming of Bad Bank and persisting problem of bad loans, the need for NCLT cannot be denied

Image: Shutterstock Just over a month after the National Company Law Tribunal (NCLT)-approved Piramal Capital and Housing Finance’s resolution plan to acquire the bankrupt and debt-ridden mortgage firm Dewan Housing Finance Corporation (DHFL), the matter is back in litigation. Technology firm 63 moons, a debenture holder of DHFL, has challenged the order saying it was ‘contrary to law’ and against the interest of DHFL’s creditors.

Over 570 days have passed since DHFL—which had nearly Rs 85,000 crore of debt owed to banks, mutual funds and other investors—had been referred by the Reserve Bank of India, for resolution under the Insolvency and Bankruptcy Code (IBC). Issues such as delayed bidding from the Adani Group last year and a fresh settlement offer from DHFL promoter Kapil Wadhawan—who is in judicial custody—had only delayed the resolution process further.
In another case involving Anil Ambani-led enterprise communications services provider Reliance Communications, a resolution is still to be arrived at since May 2018, when the case filed by telecom equipment manufacturer Ericsson India was admitted at the NCLT. There have been concerns that the regulator had raised earlier on whether an asset reconstruction company can buy RCom’s spectrum and other assets as part of the resolution.
Talks have emerged that the Department of Telecommunications may not renew RCom’s telecom license later this month, due to unpaid statutory dues. This will hurt the complete insolvency resolution process further and only mean erosion in the value of assets, forcing banks to take more haircuts.
The NCLT, which was seen as one of the mega reforms to tackle bad loan recovery, has completed just over five years of operation. Its success can be measured with two different matrixes: Recovery rate (what banks and other financial institutions recover as a percentage of the amounts claimed) and average number of days taken for the resolution process to be completed.
Recovery Rates Falling; Litigations Lengthening
Considering this, the performance of the NCLT can be divided into two parts: The early period that saw the resolution of large cases, loosely called the ‘Dirty Dozen’ (see table), including Essar Steel, Bhushan Steel, Jaypee Infratech, Electrosteels Steel and Monnet Ispat and then the later period from 2019-20 onwards, where recovery rates for creditors have only stagnated or continued to fall. This also means that banks have suffered sharp haircuts—a reduction or depreciation in the value of the asset and the outstanding loan amount due—during the resolution. This only raises concerns over the efficiency of the NCLT process. 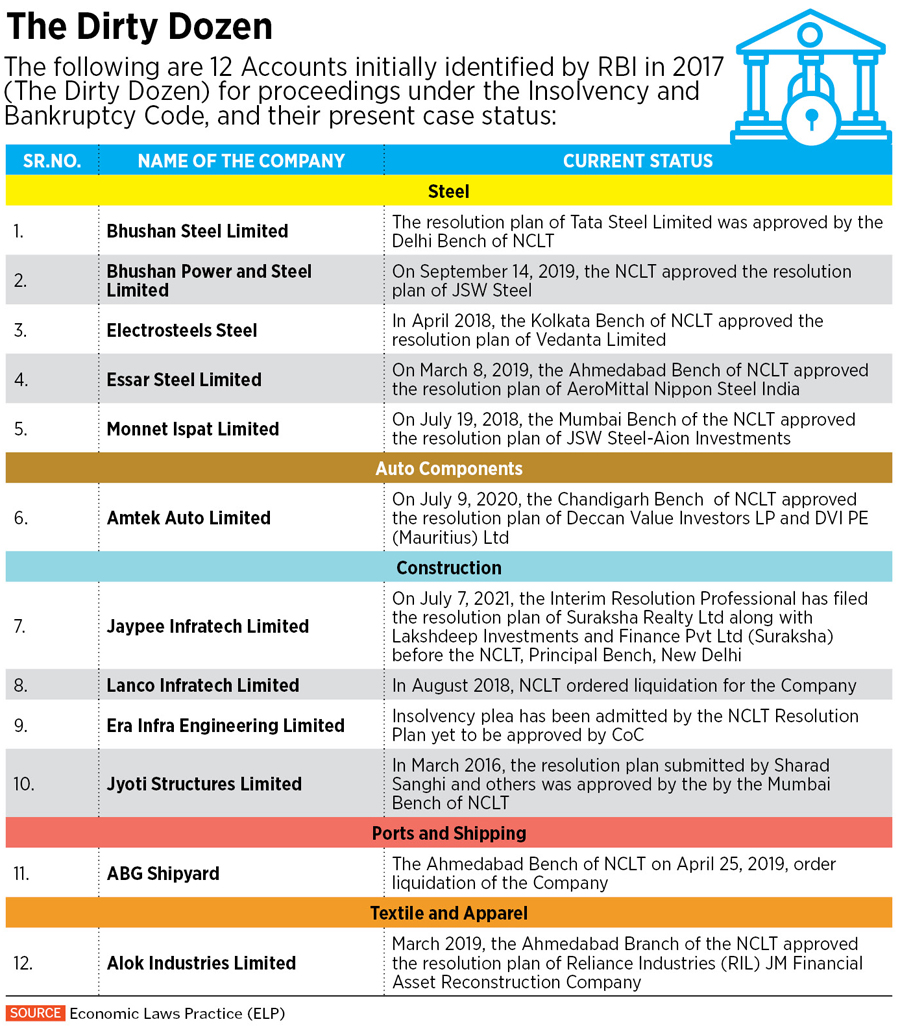 Banks and financial institutions have been able to recover only 39.26 percent of admitted claims, according to the latest January-March 2021 data from the Insolvency and Bankruptcy Board of India. This recovery rate is the lowest in three years, since the July to September 2018 rate of 26.28 percent (see chart ‘NCLT Resolution Recovery Rate). 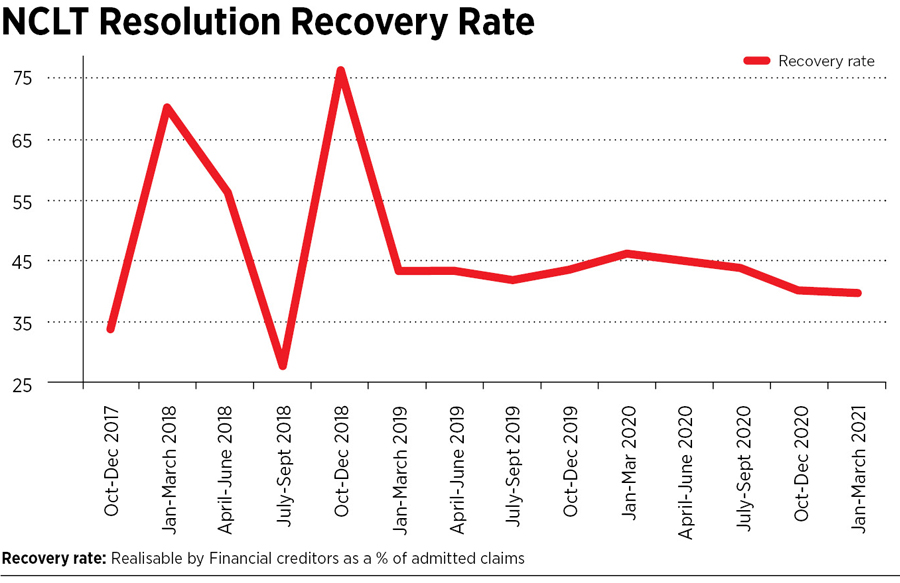 The NCLT is however, still, the most effective mechanism, compared to other channels to recover bad loans. In 2019-20, Reserve Bank of India (RBI) data showed the IBC to have a recovery rate of 45.5 percent, compared to 26.7 under the Securitisation and Reconstruction of Financial Assets and Enforcement of Security Interest Act, 2002 (Sarfaesi Act), 6.2 percent for Lok Adalats and just 4.1 percent for debt recovery tribunals.
Obviously, the spread of the pandemic has hurt tribunal proceedings since March last year, with NCLT proceedings coming to a crawl. A deeper look at the functioning of the NCLT, however, reveals a whole range of problems plaguing the system.
These include delays in admission of cases where it often takes 6-12 months to admit a case, tribunal delays in releasing orders, filing of multiple applications by creditors, lack of consensus within the committee of creditors, inadequate bench strength of NCLT judges to hear cases, which results in the pressure of multiple jurisdictions, and delay in infusion of funds by investors as envisaged by the plan.
“There has been a significant amount of frustration that has crept into the system currently, as delays cause creditors, investors and other stakeholders to wonder if this is a worthwhile mechanism to quickly resolve stressed companies. As at December 2020, a total of 21,259 cases were pending before NCLT of which 9,549 pertained to IBC,” says Nikhil Shah, managing director of Alvarez & Marsal (A&M), who leads the firm’s restructuring, turnaround and corporate finance practice.
Some of the data relating to resolutions at the NCLT is not impressive. Until FY21, 4,376 cases have admitted for insolvency resolution in NCLT, of which about 2,653 cases (60 percent) have been closed. Of this 60 percent, for 1,277 cases, an order of liquidation has been passed but the final report of liquidation has been received only for 19 percent of these cases.
Of the 348 cases resolved in NCLT as of March 2021, the average time for resolution, including litigation time, is 459 days. This is way beyond the revised time limit of 330 days prescribed by the government in July 2019. Prior to this, the expected time frame for a resolution was pegged at 270 days.
“At the current pace of disposal of cases and the backlog, it is likely to be cleared in 4 to 5 years,” Shah, says, who has advised the Bankruptcy Law Reform Committee and the Insolvency Law Committee in strengthening bankruptcy laws in India.
“Resolutions are not becoming efficient because while there may be settled precedents, the discipline of the law is not being adhered to in full. Same or similar issues consume the time of tribunals, “says Suhail Nathani, managing partner at law firm ELP.
The pandemic has created a peculiar situation for both ailing companies and corporates seeking recovery of their loans. Corporates have taken advantage of government aid through emergency credit lines from the RBI and moratoriums on loans to be paid. But these are temporary life support systems, and business and economic uncertainty continue to prevail.
“In the pandemic, creditors have been providing stressed companies more time to either climb out of the crisis or allowing them to access government-backed credit lines, which have managed to keep the them standard,” Shah says.
There is a similar trend in the United States, where the number of large corporate bankruptcy filings have slowed dramatically in the April to June quarter this year, based on Bloomberg data (see table ‘US Bankruptcy Filings’). 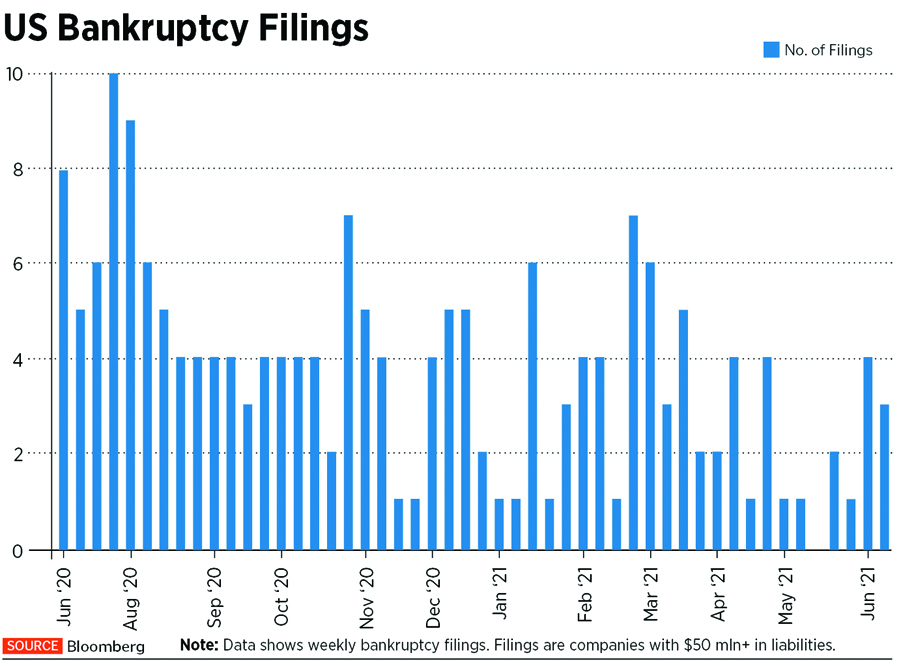