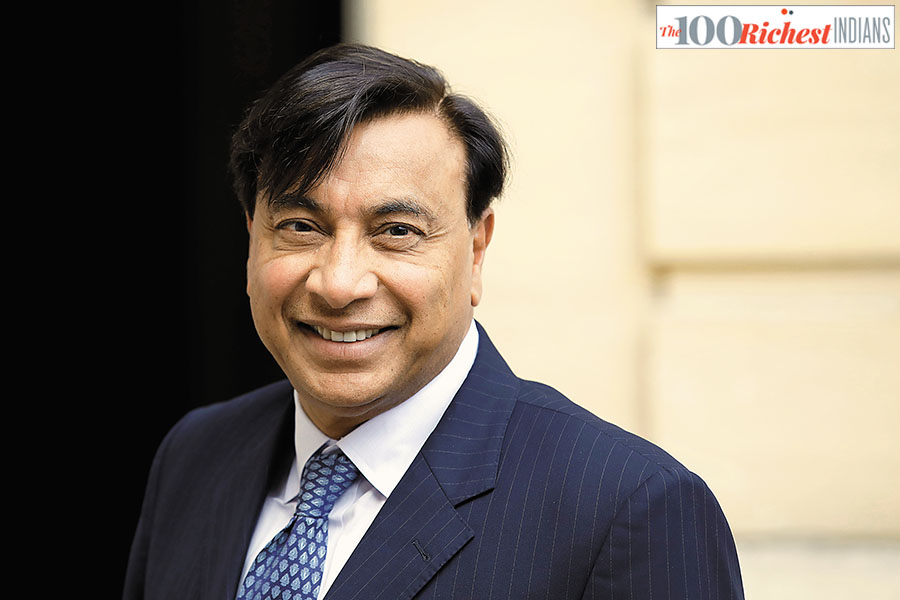 Since 2010, crude steel production in India has risen 4.6 percent a year to 95 million tonnes
Image: Benoit Tessier / Reuters
Lakshmi Niwas Mittal, 68, rarely gives up without a good fight. He’s a veteran of many acquisition battles, most notably the six-month campaign he and son Aditya Mittal waged in the summer of 2006 to acquire Arcelor. The fight for Essar proved to be no different with three parties keeping their eye firmly on the prize over the past few months—Essar Steel’s 10 million tonne integrated steel plant in India, the world’s fastest growing steel market.

The last year saw several twists and turns as ArcelorMittal, NuMetal—a consortium headed by Russia’s VTB Bank—and mining magnate Anil Agarwal’s Vedanta traded punches, exchanged blows but each time been eager to get up and fight the next round. Mittal probably had an idea of how long drawn out the process would be when he told Forbes India in a recent email interview, “Certainly in the case of Essar there are unexpected twists and turns and there will be delays to the initial ambitious timeframe that was laid out as part of the process.”

After nearly six months of litigation NuMetal was relegated to the corner after they were asked to pay up approximately the ₹48,000 crore that Essar owed the banks. As the committee of creditors sat down to vote there was high drama with Essar making a last minute attempt to pay off the creditors and take the company out of the bankruptcy process. A day later the lenders declared ArcelorMittal the winner on the basis of them submitting the highest bid along with a revival plan. The steelmaker had also cleared its dues in Uttam Galva and KSS Petron to have  its bid for Essar Steel considered. For now, unless there are new legal challenges from Essar, Mittal’s entry into the Indian market seems certain. A winning bid is a homecoming of sorts for Mittal. Since he left Calcutta in the 1970s to run his family’s steel mill in Indonesia he’s never produced steel in India. Over the years he’s also realised how difficult it is to enter India with a greenfield plant. Over the last decade South Korea’s POSCO has had to abandon plans to set up a plant in Odisha due to land acquisition problems. Tata Steel’s Kalinganagar expansion, also in Odisha, was plagued by delays. ArcelorMittal has made two attempts to set up greenfield plants in Jharkhand and Odisha only to fail mainly on account of land acquisition problems. The only project that hasn’t been abandoned so far is an automotive steel joint venture with the state-owned Steel Authority of India. 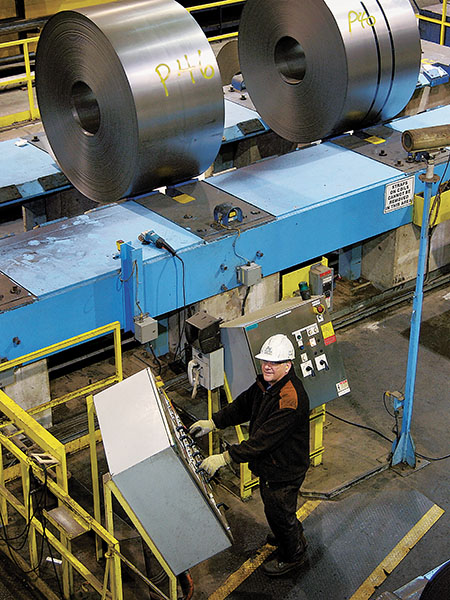 Since 2010, crude steel production in India has risen 4.6 percent a year to 95 million tonnes
Further exacerbating ArcelorMittal’s frustration is the fact that India is the world’s fastest growing steel market. Since 2010, crude steel production has risen 4.6 percent a year to 95 million tonnes, according to data from the World Steel Association. With Indian infrastructure spending rising, the Ministry of Steel expects installed capacity to rise from 128 million tonnes in 2018 to 300 million tonnes in 2030. At 69 kg per person, India has one of the lowest per capita steel consumption (see table). As a result, it’s no surprise that the recent bids for bankrupt steel plants in India —Bhushan Steel, Monnet Ispat, Electrosteel Steels—have seen the banks recover almost all their pending dues. In fact, some analysts believe the acquirers could have overpaid if the steel cycle turns for the worse.
To view the full India's 100 Richest 2018 list, click here

The Indian bankruptcy auction also came at an opportune time for Mittal as he’s spent the decade since the financial crisis deleveraging his balance sheet. The company aims to bring its net debt down from $10.5 billion to $6 billion in the medium term. “We believe this is the level that will ensure we are able to maintain an investment grade rating through any point in the cycle,” said Mittal. The Essar acquisition will see ArcelorMittal take on additional debt. 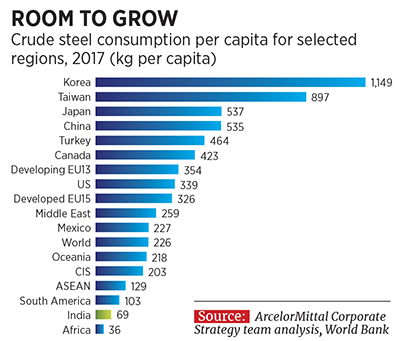 Adding Essar Steel would take ArcelorMittal’s 114 million tonne capacity up by 8 percent. The company believes it is well placed to turn around the plant by infusing working capital and debottlenecking it could get the plant to produce close to its stated capacity of 10 million tonnes. At a bid price of about $7 billion Essar’s plant is available cheaper than the globally accepted benchmark of $1billion (₹7300 crore) for one million tonnes. That probably also explains why Mittal has readily agreed to pay the dues amounting to ₹7469 crore (about $1 billion) that Uttam Galva and KSS Petron owe the banks. He’s getting a $2 billion discount and a functioning plant to boot.

Tweets by @forbesindia
Oyo: There's room at the top
Turakhia brothers: Getting it right, time after time