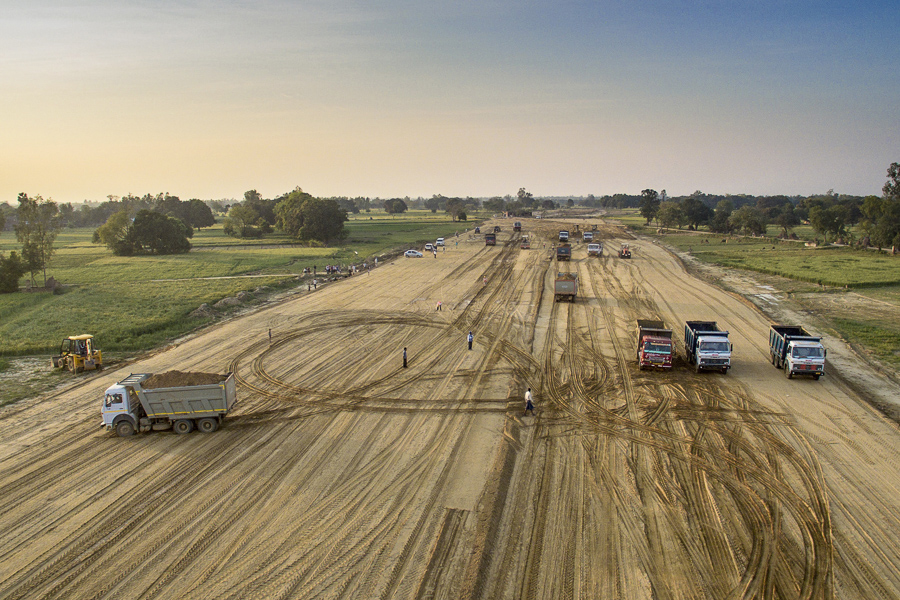 A highway under construction on the outskirts of Lucknow, Uttar Pradesh​
Image: shutterstock


It’s been a gruelling year for India’s economy. Hit hard by the Covid-19 pandemic, it is desperate for a revival, after what India’s Minister of Finance Nirmala Sitharaman referred to as an “unprecedented contraction”, in the country’s GDP.

To turn the tide, the Narendra Modi government has focussed much of its attention on the country’s shaky infrastructure sector, giving it a much-needed shot in the arm by raising government spending in the sector that includes roads, railways, and ports.

On February 1, Sitharaman announced a slew of measures for the country’s infrastructure sector, including the highest-ever capital outlay for roads. “I am providing an enhanced outlay of Rs 118,101 crore for the Ministry of Road Transport and Highways, of which Rs 108,230 crore is for capital, the highest ever,” she read from her ‘Made in India’ tablet.

To do all that, the government is looking to set up a financial institution that will help with long-term debt financing. “A professionally managed development financial institution [DFI] is necessary to act as a provider, enabler, and catalyst for infrastructure financing,” Sitharaman said. “Accordingly, I shall introduce a bill to set up a DFI. I have provided a sum of Rs 20,000 crore to capitalise this institution. The ambition is to have a lending portfolio of at least Rs 5 lakh crore for this DFI in three years.”

Besides, the government is also looking to launch a National Monetisation Pipeline, with a dashboard to track progress and provide visibility to investors.

“The government’s focus on restarting the economy is clear in its commitment to the time-tested Keynesian principle of spurring infrastructure to create jobs and channelise economy multiplier cycles,” says Vivek Agarwal, partner, Infrastructure, Government and Healthcare Practice at KPMG in India. “With a Rs 5.4 lakh crore budget, there is a huge focus on strengthening infrastructure through industrial corridors, highways, BRTs [Bus Rapid Transits], railways, ports, and power, especially with the highest-ever allocation to the Ministry of Road Transport and Highways.”

Roads
Much of the Modi government’s focus on roads is in states where elections are due this year. These include Kerala, West Bengal, Assam, and Tamil Nadu, where the Bharatiya Janata Party (BJP) is looking to retain power or win elections for the first time.

The Budget envisages the building of 3,500 km of national highways in Tamil Nadu at an estimated investment of Rs 1.03 lakh crore, and 1,100 km of national highway work in Kerala at an investment of Rs 65,000 crore. In West Bengal, where the BJP is engaged in a bitter feud with the ruling Trinamool Congress for power, the finance minister announced 675 km of road projects at an estimated cost of Rs 25,000 crore, while Assam will see investments of Rs 34,000 crore over the next three years in road construction.

“FY2022 remains a crucial year for two reasons,” says Rajeshwar Burla, vice president, Corporate Ratings, ICRA. “The importance of government spending on infrastructure to revive the economy, and the significant catch-up required in the ongoing Bharatmala Pariyojana and allied programmes. Against this backdrop, the massive increase in budgetary allocations towards capital spend for the Ministry of Road Transportation and Highways by 32 percent to Rs 1,08,230 crore in BE FY2022 bodes well for the road sector. Including the IEBR (market borrowings) and asset monetisation proceeds for NHAI, the total capital outlay increased by 35 percent to Rs 1,98,230 crore in BE FY2022 from Rs 1,46, 975 crore for BE FY2021.”

India’s road sector is expected to bounce back to normalcy after traffic had been hit hard amidst the lockdown in the economy. The execution of road projects during the first eight months of FY2021 stood at 6,207 km, 4 percent higher than 5,958 km in the year-ago period. Ratings agency ICRA expects execution for FY2021 to surpass 10,500 km.

Railways, metros and urban infrastructure
To create a ‘future-ready’ railway system by 2030, bring down logistics costs, and boost its Make in India initiative, the government has allocated a record Rs 110,055 crore for the Ministry of Railways, which includes Rs 107,100 crore for capital infrastructure.

Much of that will go into the construction of new lines, electrification, overhauling of the existing signalling and telecommunication system, and station redevelopment. Last year, Indian Railways had announced the National Rail Plan 2024, with a focus on rationalising freight tariffs and reducing transit time and cost.

The initiatives are expected to bring private investments into the sector. “Railways have seen a significant allocation in this year’s Budget, with a total allocation of Rs 1.1 lakh crore, mostly on the capital expenditure, including the railways corridors,” says Abhaya K Agarwal, partner, Strategy and Transaction, Infrastructure & Government and Public Sector, EY India. “The National Rail Plan 2030 to create a future-ready railways system will be critical for boosting and bringing investments into the railways sector.”

Sitharaman also announced plans to launch ‘MetroLite’ and ‘MetroNeo’, two new technologies that will cost much less but provide the same experience, convenience, and safety in tier 2 cities and peripheral areas of tier 1 cities. India’s metro rail network currently spreads over 702 km, and is in the process of adding another 1,600 km in 27 cities.

Additionally, the government has announced a new scheme at a cost of Rs 18,000 crore to support augmentation of public bus transport services. “The scheme will facilitate deployment of innovative PPP models to enable private sector players to finance, acquire, operate and maintain over 20,000 buses,” Sitharaman said.

Airports and ports
In continuation of plans to privatise the country’s airports, the government is looking at airports in India’s tier 2 and tier 3 cities.

Last year, the Adani Group had emerged as India’s largest airport operator after it won concession agreements for six airports—in Jaipur, Guwahati, Ahmedabad, Mangaluru, Lucknow, and Thiruvananthapuram—from the Airport Authority of India (AAI), which manages over 100 airports in the country.

India’s domestic air travel is expected to recover to pre-Covid-19 levels by FY2023, with traffic reaching nearly 80 percent of those levels in FY2022. This year, Indian airlines are expected to post a net loss of Rs 21,000 crore, following travel restrictions amid the pandemic, according to ICRA, and will also require additional funding of Rs 37,000 crore from FY2021 to FY2023 to recover from the losses and debt.

The government is also looking at moving operations of major sea ports to a model where a private partner will manage it for them. “For the purpose, seven projects worth more than Rs 2,000 crore will be offered by the major ports on a public-private partnership mode in FY21-22,” said the finance minister.

Power
With the viability of power distribution companies (discoms) becoming a serious concern, the government is looking at a revamped reforms-based, result-linked power distribution sector scheme, which will be launched with an outlay of Rs 3,05,984 crore over the next five years. “The scheme will provide assistance to discoms for infrastructure creation, including pre-paid smart metering and feeder separation, upgradation of systems etc, tied to financial improvements,” Sitharaman said.

India’s power distribution companies are expected to see their debt rise to a staggering Rs 4.5 lakh crore by the end of 2020-21, according to research and ratings agency Crisil.

In addition, the government is looking to put in a place a framework to allow customers to choose their discoms, in an attempt to promote competition among them. “The distribution companies across the country are monopolies, either government or private,” the finance minister said. “There is a need to provide choice to consumers by promoting competition. A framework will be put in place to give consumers alternatives to choose from among more than one distribution company.”

“Since the discoms operate as regional monopolies in their respective areas of supply, this framework will bring in private players and improve operational efficiencies, which will benefit consumers, by providing them choice for supplier selection,” says Anish De, partner and national head, Energy and Natural Resources, KPMG India. “This proposal has been in the works for six years, when the Electricity Amendment Bill 2014 was tabled. The recent Electricity Amendment Bill 2020 excluded this provision, and therefore this is a welcome step.”

Tweets by @forbesindia
Budget 2021: What does a dip in budget allocation mean for the future of education?
Budget 2021: For India's beleaguered automobile sector, scrapping policy brings some good news