Food prices have soared worldwide during the pandemic, driven by supply chain disruptions, higher fuel costs, global shortages of fertiliser and other factors 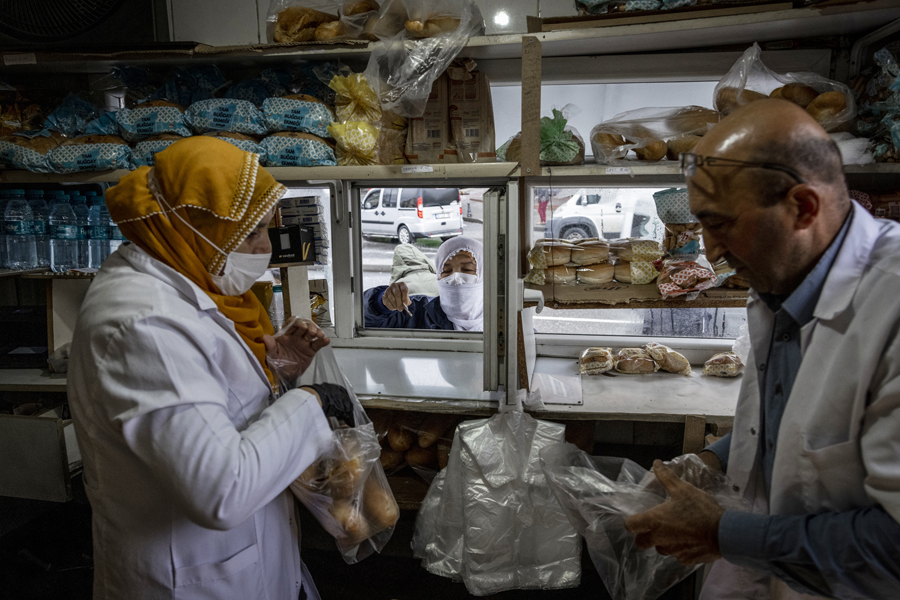 ISTANBUL — A line of glum-faced people wrapped up against the rain stood along the street outside a government bread bank in a suburb of Istanbul.

“People cannot manage,” said Sengul Essen, 57. “I worked 21 years as a cleaner at the university and now I am waiting in a bread queue.”

Turks are grappling with soaring inflation, watching prices rise daily as the lira has plunged against the dollar and their salaries and pensions no longer cover even the staples of life. Bread lines have started to appear in neighborhoods as growing numbers of people are turning to cheap, government-issued bread to fill their tables.

On a cold, wet afternoon this week, the mood in the bread line was bleak. Most people did not want to be interviewed for fear of getting into trouble for criticizing the government of President Recep Tayyip Erdogan, which frequently detains his critics. Those who spoke declined to give their names.

But as a conversation started, the grumbling grew.

“You don’t have to ask how things are, you can see the line of people,” one young woman said.

“Morning and night we see prices increase,” said an older man behind her. Of the government, he said, “they don’t ask us” how people are faring, adding, “but you see us in the queue.”

An electrician stood listening. “People are in pain,” he said. He said he earned 2,900 lira per month (about $207 at current rates), and his rent had just gone up to 2,000 lira. His wife was buying less of everything in her weekly shopping, he said. “I cannot make ends meet.”

Food prices have soared worldwide during the pandemic, driven by supply chain disruptions, higher fuel costs, global shortages of fertilizer and other factors. But the plummeting value of Turkey’s currency, down about 50% since February against the euro and dollar, makes the problem especially painful here.

When it comes to bread, a hallowed staple that Turks traditionally eat with every meal, the government has intervened significantly, pressuring bakeries to sell the traditional white loaf at a price lower than it costs to make, and forcing grocery stores to stick to the set price. The price is set by the Chamber of Bakeries, a trade association, but most bakers said the order came from the central government.

The Istanbul municipality has significantly increased supplies of cheap bread from government factories, and the federal government has announced that it is providing subsidized flour to bakeries.

Yet, in a sign of the depth of the economic crisis, bread sales are down and bakeries, forced to keep prices to the level set by the Chamber of Bakeries, warn that they are facing bankruptcy.

“I cannot turn around the business,” said Ahmet Ucar, 39, whose bakery stood up the hill from the government kiosk. “The price of flour keeps increasing.”

His costs were constantly rising, not just of flour, but of yeast and sesame seeds, electricity and gas. In a final blow, the landlord had also raised the rent, Ucar said.

Sales are down, as in most bakeries, by roughly one-third. Customers are buying less, and some are joining the lines at the government kiosk where a loaf costs 1.25 lira, about 9 cents.

Ucar said he could not access the cheap flour offered by the government because the suppliers did not take credit but demanded cash up front. He dismissed the government announcements as just show.

Some bakeries have ignored the set price of 2.5 lira and raised the price of the staple loaf to 4 lira, in line with their rising costs.

But Ucar said he would not take the risk. “We cannot raise the price,” he said. “The municipality will fine us.”

Many people complain that political leaders are busy scoring points over the crisis rather than fixing the problem.

The Istanbul municipality, which is run by Mayor Ekrem Imamoglu, an opponent of Erdogan and a presidential hopeful, has announced that it is providing milk to disadvantaged schoolchildren and boosting sales of low-cost bread from the municipal factories.

The municipality has raised production to 1.5 million loaves a day, although demand is up to 1.6 million, said Okan Gedik, the general manager of Halk Ekmek, the municipality’s bread company.

“We are crushed from two sides,” Ucar said. “The municipality is selling cheap bread to gain votes, and the government keeps prices down to keep votes.”

In one bakery, where the owners said they were on the verge of bankruptcy, a fierce argument broke out between the two partners. One blamed Imamoglu for undercutting the bakery by subsidizing sales. His partner blamed Erdogan’s government for forcing bakeries to keep prices low.

The partners asked not to be named for fear of trouble from the government. The senior partner said he had taken out a bank loan and was selling family jewelry to tide them over. If conditions did not change he would lose the business in a few months, he said, choking up.

Store owners and bakers with less overhead said they could survive but were eating into their savings.

“Bakeries who do not have large sales will not survive,” said Hasan Topal, 55, who runs a café besides his bakery. “I will go to the end until I eat up all my capital.”

Ali Babacan, an opposition leader who served as finance minister under Erdogan, berated the president on Twitter for blaming some of the price rises on shopkeepers stockpiling goods.

“Mr. Erdogan, poor shopkeepers, who do not know what to sell and how much to sell in a country where there is no price stability due to your faulty policies and bad management, you call them hoarders.”

Ucar said he was already running at a loss and could see the end approaching. “I don’t know if I will be here next year,” he said. “I will try to go abroad.”