The drug trade emerged in the ruins of a decade of war, which shattered Syria's economy, reduced most of its people to poverty and left members of Syria's military, political and business elite looking for new ways to earn hard currency and circumvent US economic sanctions

By Ben Hubbard and Hwaida Saad 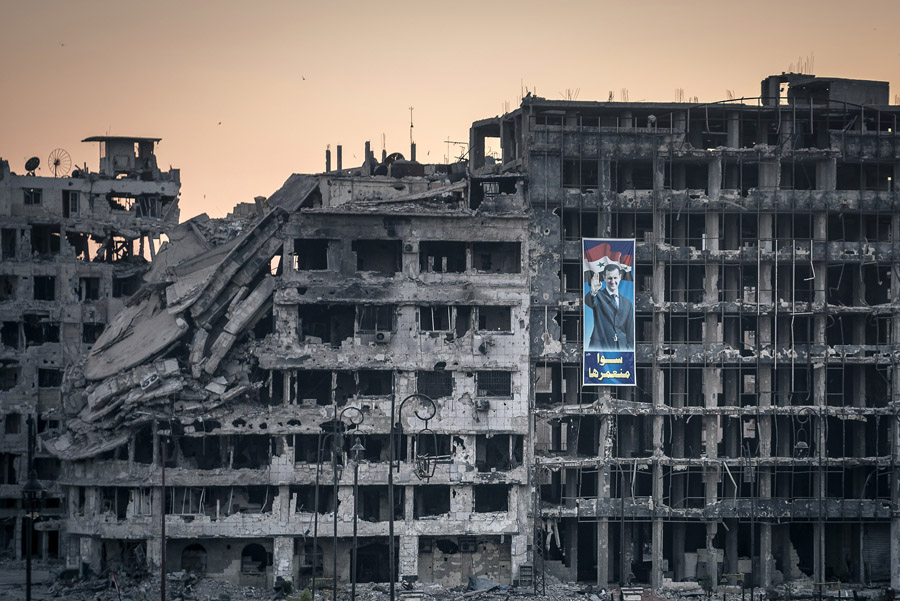 A poster of President Bashar al-Assad hangs from the ruins of a shopping mall in Homs, Syria, June 15, 2014. Powerful associates of Syria’s president are making and selling captagon, an illegal amphetamine, creating a new narcostate on the Mediterranean. (Sergey Ponomarev/The New York Times)

BEIRUT — Built on the ashes of 10 years of war in Syria, an illegal drug industry run by powerful associates and relatives of President Bashar Assad has grown into a multibillion-dollar operation, eclipsing Syria’s legal exports and turning the country into the world’s newest narcostate.

Its flagship product is captagon, an illegal, addictive amphetamine popular in Saudi Arabia and other Arab states. Its operations stretch across Syria, including workshops that manufacture the pills, packing plants where they are concealed for export and smuggling networks to spirit them to markets abroad.

An investigation by The New York Times found that much of the production and distribution is overseen by the 4th Armored Division of the Syrian army, an elite unit commanded by Maher Assad, the president’s younger brother and one of Syria’s most powerful men.

Major players also include businessmen with close ties to the government, the Lebanese militant group Hezbollah and other members of the president’s extended family, whose last name ensures protection for illegal activities, according to the Times investigation, which is based on information from law enforcement officials in 10 countries and dozens of interviews with international and regional drug experts, Syrians with knowledge of the drug trade and current and former United States officials.

The drug trade emerged in the ruins of a decade of war, which shattered Syria’s economy, reduced most of its people to poverty and left members of Syria’s military, political and business elite looking for new ways to earn hard currency and circumvent U.S. economic sanctions.

Illicit speed is now the country’s most valuable export, far surpassing its legal products, according to a database compiled by the Times of global captagon busts.

In recent years, authorities in Greece, Italy, Saudi Arabia and elsewhere have seized hundreds of millions of pills, most of them originating from one government-controlled port in Syria, some in hauls whose street value could exceed $1 billion, according to law enforcement officials.

These seizures probably represent only a fraction of the drugs shipped, drug experts say. But they provide a window into the scope of the trade, suggesting that the industry has exploded in recent years.

More than 250 million captagon pills have been seized across the globe so far this year, more than 18 times the amount captured just four years ago.

Even more concerning to governments in the region, the Syrian network built to smuggle captagon has begun to move more dangerous drugs, such as crystal meth, regional security officials say.

The biggest obstacle in combating the trade, officials said, is that it has the backing of a state that has little reason to help shut it down.

The rise of a narcostate

Captagon was originally manufactured by a German pharmaceutical company as a stimulant to treat attention deficit disorder and narcolepsy. In the 1980s, users in Saudi Arabia and other Persian Gulf states started taking it recreationally to get an energy boost, banish fear and stay awake to study for exams, work, party or drive long distances.

Its white pills were stamped with two crescents, giving it the Arabic nickname “abu hilalain,” or “the one with two moons.”

After it was found to be addictive, it was banned internationally in the late 1980s. But to continue feeding the Gulf market, illicit captagon production took off, including in Lebanon’s Bekaa Valley, a hub of hashish production and a stronghold of Hezbollah, an Iran-backed militant group that is now part of Lebanon’s government.

Although the pharmaceutical Captagon contained the amphetamine fenethylline, the illicit version sold today, often referred to as “captagon” with a lowercase c, usually contains a mix of amphetamines, caffeine and various fillers. Cheap versions retail for less than a dollar a pill in Syria, while higher-quality pills can sell for $14 or more apiece in Saudi Arabia.

After the Syrian war broke out, smugglers took advantage of the chaos to sell the drug to fighters on all sides, who took it to bolster their courage in battle. Enterprising Syrians, working with local pharmacists and machinery from disused pharmaceutical factories, began making it.

Captagon labs are scattered across government-held parts of Syria, according to Syrians in areas where the drugs are produced — in territory controlled by Hezbollah near the Lebanese border; outside the capital, Damascus; and around the Mediterranean port city of Latakia.

The security bureau of the 4th Division, headed by Maj. Gen. Ghassan Bilal, provides much of the network’s nervous system. According to regional security officials and a former Syrian military officer, the bureau’s troops protect many of the factories and ease the movement of drugs to Syria’s borders and the port.

“The division’s presence in the region is dangerous,” said Col. Hassan Alqudah, head of the narcotics department for Jordan’s Public Security Directorate. “Captagon factories are present in the 4th Division’s areas of control and under their protection.”

Other prominent Syrians participate in the business.

A key player near Damascus is Amer Khiti, a businessman whose rise is emblematic of Syria’s new wartime business class, according to former U.S. officials and Syrians with knowledge of the drug trade.

Originally a modest livestock trader, Khiti became a smuggler during the war, spiriting food and other goods between Damascus and the rebel-held suburbs with the support of the state, according to Sami Adel, an activist from Khiti’s hometown who has tracked his career.

As the rebels were routed from the suburbs, he bought up real estate there and invested in packaging facilities that are used for smuggling.

Another wartime rags-to-riches figure is Khodr Taha, a onetime poultry merchant who oversees 4th Division checkpoints across the country, where he facilitates the movement of captagon, according to regional security officials and Syrians with knowledge of the drug trade.

Khiti did not respond to requests for comment and efforts to reach Taha through companies he owns were unsuccessful.

Captagon has probably become Syria’s most important source of foreign currency, according to Jihad Yazigi, editor of The Syria Report, a publication that tracks Syria’s economy.

“That does not mean that the revenues earned are going back into the economy,” he said. “They are mostly being invested in the bank accounts of smugglers and warlords.”

Although officials in Europe struggle to identify smugglers, Jordan, one of the United States’ closest partners in the Middle East, sits on the front lines of a regional drug war.

“Jordan is the gateway to the gulf,” Brig. Gen. Ahmad al-Sarhan, commander of an army unit along Jordan’s border with Syria, said during a visit to the area.

The drug trade worries Jordanian officials for many reasons.

The quantities are increasing. The number of captagon pills seized in Jordan this year is nearly double the amount seized in 2020, according to Alqudah, head of the narcotics department.

Although Jordan was originally just a pathway to Saudi Arabia, as much as one-fifth of the drugs smuggled in from Syria are now consumed in Jordan, he estimated. The increased supply has lowered the price, making it easy for students to become addicted.

Even more worrying, he said, is the growing quantity of crystal meth entering Jordan from Syria, which poses a greater threat. As of October, Jordan had seized 132 pounds of it this year, up from 44 pounds the year before.

“We are now in a dangerous stage because we can’t go back,” said Dr. Morad al-Ayasrah, a Jordanian psychiatrist who treats drug addicts. “We are going forward and the drugs are increasing.”