The government is set to miss its budgeted divestment targets yet again, even as the shortfall could be partly offset by buoyancy from other tax revenues this fiscal 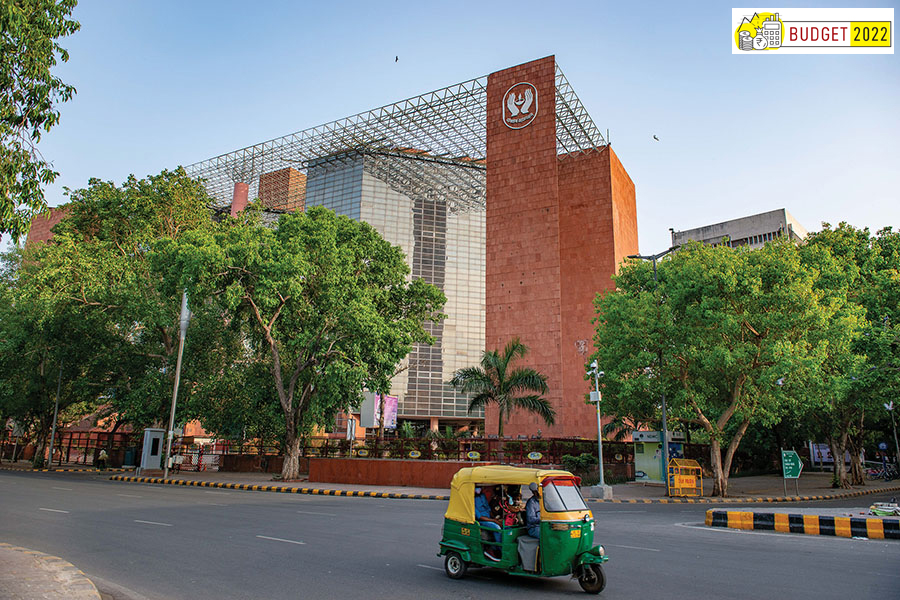 The initial public offering (IPO) of LIC, the largest insurer in the country, is expected to fetch anywhere between ₹80,000 crore and ₹1 lakh crore
Image: Shutterstock

The sale of debt-laden carrier Air India to the Tata Group in October 2021 was the highlight of the year for the government when it comes to its ambitious disinvestment programme. After all, it took the government over four years to find a buyer for the Indian airline. But that deal alone is not close enough to reach the target the government has set for itself.

During the budget in February 2021, Finance Minister Nirmala Sitharman had set a target of ₹1.75 lakh crore for the year and was hoping to sell some of the assets that the government had put on the block in the last few years. The target was a downward revision from the ambitious target of ₹2.1 lakh crore the year before, which it could not meet. For FY21, the government managed to raise ₹32,845.18 crore.

“The government is unlikely to reach the budgeted divestment target in FY22. We are pencilling in a shortfall of ₹75,000-1 lakh crore. However, the revenues’ upside will offset the divestment shortfall,” says Suvodeep Rakshit, senior economist at Kotak Institutional Equities.

Rakshit adds that the fiscal deficit will also be subjected to higher expenditure on account of subsidies, the rural employment guarantee scheme, health expenditure and other accounts. But in the end, he expects the government to stick to the budgeted fiscal deficit target of 6.8 percent of GDP.

Rakshit is not the only one who thinks the government is set to miss its target. Rahul Bajoria, chief India economist at Barclays, says, “We expect a shortfall of ₹50,000 crore on the divestment front. The proposed divestment of Life Insurance Corporation of India (LIC) remains the elephant in the room, and if it does not go through, the shortfall could be even wider.”

While the consensus on the street is clear that the shortfall could be partly offset by the considerable buoyancy from other tax revenues for the government this fiscal, it is unlikely the government will be able to reach its disinvestment targets.

According to the Department of Investment and Public Asset Management (DIPAM) website, which comes under the finance ministry and takes care of sale of public sector enterprises as well as monitors dividends received from PSUs, during the current year (2021-22) it has received ₹44,446.62 crore as on January 3. Of the total receipts, it received ₹9,329.9 crore through pure divestments and ₹35,116.72 crore through dividend receipts.

The divestments of ₹9,329.9 crore have essentially come in from various offers for sale (OFS), including the government’s sale of some of the Specified Undertaking of The Unit Trust of India’s (SUUTI) stake in private lender Axis Bank worth ₹3,994.33 crore, and the National Mineral Development Corporation (NMDC) OFS worth ₹3,651.37 crore. 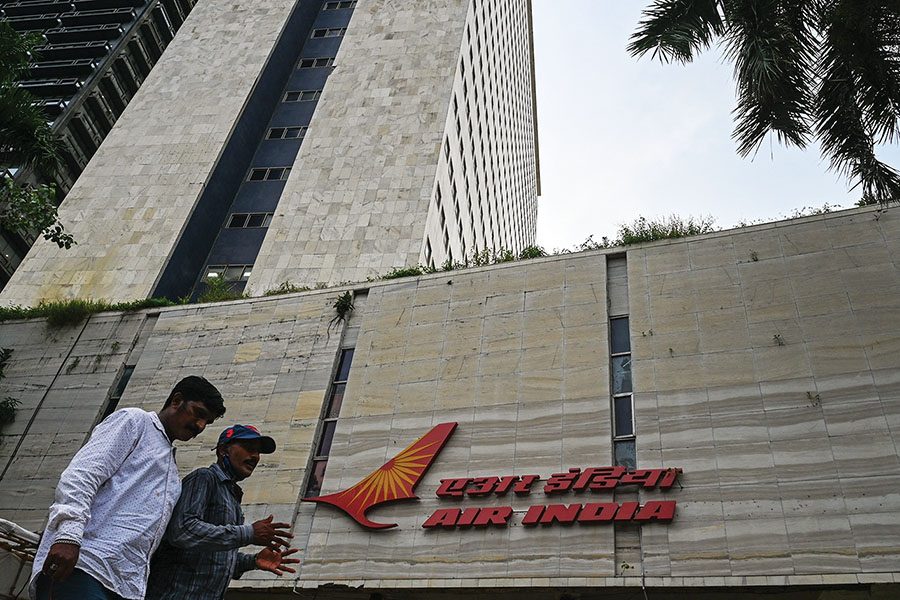 The government signed the agreement for the sale of Air India to the Tata Group in October
Image: Punit Paranjape/ AFP

While it is yet to account for the Air India sale process, on October 25, the government finally signed the share purchase agreement with the Tata Group to sell Air India, Air India Express and 50 percent stake in ground handling services firm AISATS for ₹18,000 crore. According to the transaction, the Tatas will pay ₹2,700 crore as equity and take over ₹13,500 crore worth of debt of the airline. The government had put a reserve price of ₹12,906 crore for the incoming buyer and had created a special purpose vehicle (SPV) that took over nearly 75 percent of the debt of the airline, which stands at nearly ₹46,262 crore and lies with the government.

“The sale of Air India does provide a strong signal to the investor community on the seriousness of the political will behind such decisions. Once the prevailing uncertainty is behind us, we do expect the government to stick to a path of aggressive divestments in the coming years,” adds Bajoria.

Over the last four years, the government has been heavily dependent on buybacks to fill its coffers and meet fiscal deficit targets. It has found it difficult to raise capital through the strategic sale of assets. Since 2019, the government has been trying to sell its 53.29 percent stake in retailer-cum-refiner Bharat Petroleum Corporation Limited and the pandemic has further delayed the stake sale process. The street is also expecting The Banking Laws (Amendment) Bill, 2021, which will open the doors for the government to reduce its stake in two public sector banks from the current 51 percent to 26 percent. The government is equally keen on the strategic sale of its stake in the LIC-controlled IDBI Bank.

One of the largest sales that is expected to fill the government’s coffers before the financial year ends is the initial public offering (IPO) of LIC, the largest insurer in the country, which is expected to fetch anywhere between ₹80,000 crore and ₹1 lakh crore. Bankers have started working on the process and it is expected to be a bumper IPO for Indian capital markets, but with the sudden surge in cases of the coronavirus and its Omicron variant across the country—particularly cities like Mumbai, Delhi, Bengaluru and Kolkata—it is yet to be seen how the work progresses on the capital issue programme.

Bajoria says, “LIC could likely mark the biggest IPO in Indian history. In addition to boosting government revenues, the listing of LIC could have wider implications for banking, finance and insurance industries in the country.” 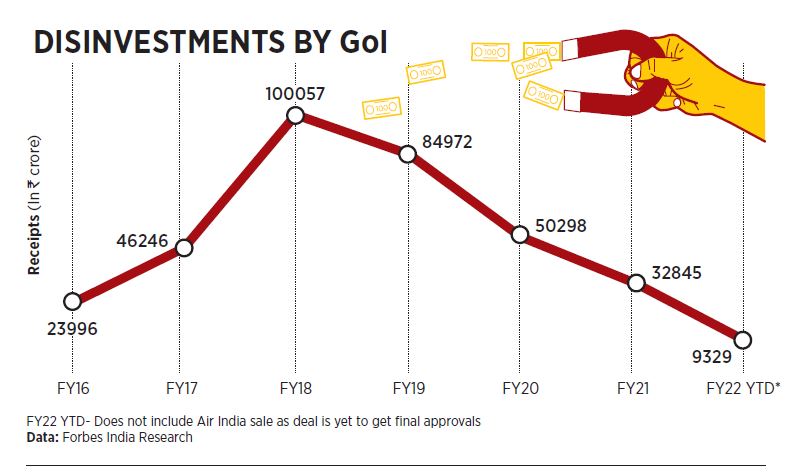 LIC’s IPO, however, is not a cakewalk. Anil Gupta, vice president and sector head for financial services at ratings agency ICRA—who also believes that the government is set to miss its disinvestment target—says, “The key to the LIC divestment are the proposed amendments to the LIC Act and the restatement of past financials, and arriving at the embedded value of LIC, which will be a key determinant of its valuation. Further, given the target size of the IPO, attracting long-term investors with deep pockets will be critical for achieving the proposed divestment.”

One thing the government cannot lose sight of is the fact that it needs to garner as many resources as possible keeping in view the medium-term fiscal situation and the infrastructure spending targets.

Post the sale of Air India, Tuhin Kanta Pandey, secretary at DIPAM, had told Moneycontrol that the department is confident about the sale of BEML, Shipping Corporation of India, Neelachal Ispat Nigam Limited, Pawan Hans, Central Electronics Limited and Bharat Petroleum by the end of FY22 and set the cash registers ringing for the government.

On January 3, DIPAM announced an extension of the last date for invitation of queries for expression of interest for the proposed 100 percent divestment of HLL Lifecare Limited.  It is re-pursuing the 100 percent sale of Projects and Development India Limited, which comes under the department of fertilisers.

It is expected that the government will maintain a high target of asset monetisation over the medium term in order to finance higher capital expenditure. According to the Controller General of Accounts (CGA), the government’s revenue receipts (actuals) up to November 2021 stand at ₹13.58 lakh crore, while the budgeted estimate for FY22 is ₹17.88 lakh crore. During the last Budget, the government reported a fiscal deficit of 9.5 percent, higher than what economists and corporates were expecting. For the coming year, it has budgeted an estimate of 6.8 percent, which is still higher than the government’s comfort zone.

“We expect the government to continue [to] budget aggressively in terms of sale of non-strategic companies, along with asset sales,” says Rakshit of Kotak Institutional Equities. “However, execution will be key and will need to be more efficient than in a business-as-usual scenario. There will likely be challenges that are both market-driven as well as organisational in some of the sectors.”

The divestment targets in the revised estimates for FY2022 could be substantially revised downward, but the shortfall vis-a-vis the target is expected to be carried to the next Budget as a lot of ground work for the divestment of many identified entities is already under process.

While the government has another three months before the accounts are taken care of, on August 23, 2021, it introduced the National Monetisation Pipeline (NMP) to raise nearly ₹6 lakh crore.

Gupta of ICRA explains, “The NMP is different from divestments as the government intends to give identified cash-generating assets on lease. Given the steady cash flow generation of these assets, we expect investor interest to be strong in NMP, and the cash flows from such monetisation will be instrumental in recycling the capital deployed in these completed projects to new projects identified as part of the ₹111 trillion national infrastructure pipeline.”

Tweets by @forbesindia
Photo Of The Day: Makeshift test centres
It's not complicated. Microsoft wants activision for its games