Unless India sustains a relatively high growth trajectory, the road to fiscal consolidation is long and winding, especially in a highly volatile global environment 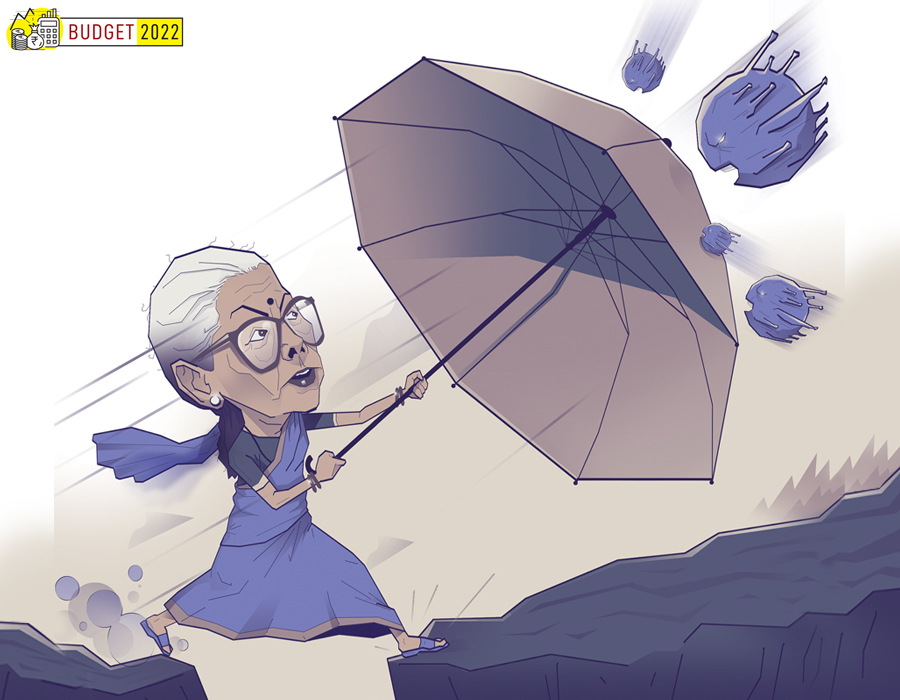 Nirmala Sitharaman to increase spending on social welfare schemes and infrastructure development by up to ₹40 lakh crore. But there are strings attached, which has the money market tied up in knots
Illustration: Chaitanya Dinesh Surpur

In a few days, the finance ministry will roll out Budget 2022 preparations with the traditional halwa ceremony amidst lofty wish lists of India Inc and the sharp scrutiny of economists. Grappling with unprecedented challenges posed by the coronavirus pandemic two years ago, the government moved the goalpost by raising the FY22 fiscal deficit target to 6.8 percent from 3 percent. It aims to reduce it to 4.5 percent in FY26.

This plan has allowed Finance Minister (FM) Nirmala Sitharaman to increase spending on social welfare schemes and infrastructure development by up to ₹40 lakh crore. But there are strings attached, which has the money market tied up in knots. For one, government borrowing is likely to remain elevated at around ₹12 lakh crore. The Centre’s debt burden, as a percentage of GDP, has considerably increased to 60.5 percent in FY21 from 51.6 percent in FY20. Some economists expect it to touch 85 percent in the current fiscal. “A big concern for the markets is that fiscal deficit can remain higher for the next couple of years,” says R Sivakumar, head of fixed income at Axis Mutual Fund. Unless India sustains a relatively high growth trajectory, the road to fiscal consolidation is long and winding, especially in a highly volatile global environment.

As of end-November, incremental revenues comfortably exceeded expenditures, and fiscal deficit stood at ₹6.96 lakh crore or 46.2 percent of the budget estimate. If data for the first nine months released by the government is a fair indicator, then it seems unlikely that the North Block will deviate from its indicated fiscal agenda.

Most economists Forbes India interacted with largely echo this view. Devendra Pant, chief economist, India Ratings and Research, is hopeful that the fiscal gap will shrink by 20 basis points to 6.6 percent in FY22. Suvodeep Rakshit, chief economist, Kotak Institutional Equities, says, “6.8 percent is not a difficult target for the FM to achieve.” He does not rule out the possibility of fiscal deficit in the range of 6 to 6.5 percent in the current financial year. Nikhil Gupta, chief economist at Motilal Oswal Financial Services, is of the view that fiscal deficit is likely to be pegged at 6.8 percent. Public finance expert M Govinda Rao, former director, National Institute of Public Finance and Policy, expects the government to marginally overshoot the fiscal deficit target by 20 basis points.

Importantly, the government stands to miss its divestment target of ₹1.75 lakh crore by a huge margin, unless it successfully launches the much-awaited initial public offering (IPO) of the Life Insurance Corporation (LIC) before March end. “Fading hopes of the disinvestment target being met portend a fiscal deficit of ₹16.5-17 lakh crore in FY22,” says Aditi Nayar, chief economist at ICRA.

The windfall on the GST front has come as a huge relief for the government as it has once again failed to meet its disinvestment target. It was confident of monetising assets worth ₹1.75 lakh crore, but so far has sold assets to the tune of ₹9,330 crore. All eyes are on the LIC IPO, which the government is keen to execute this fiscal, but currently there are no definite details available on valuation and offer size. “I expect the LIC IPO this fiscal, but the process is longer than expected due to the complexities involved. The sale of BPCL can spill over to the next fiscal though,” Rao says. Gupta has a different perspective on the disinvestment debacle. He points out that total revenue receipts could exceed budget estimates by ₹2 lakh crore in FY22. “Considering the robust pace of tax growth, the government may actually want to push the divestment plan to next year—when tax growth perhaps will not be as strong,” he says.

The higher-than-expected dividend payout of ₹99,122 crore from the Reserve Bank of India (RBI) will also help bolster the government’s balance sheet. In the previous fiscal, the central bank had transferred ₹57,128 crore to the government.

Budget 2021 was largely applauded for its underlying intent to rekindle the animal spirits of the economy with its thrust on infrastructure spending to boost jobs and GDP. However, so far, the government has deployed less than 50 percent of its budgeted outlay of ₹5.54 lakh crore for capital expenditure towards infrastructure development to engine growth and create employment.

Revenue expenditure stood at ₹18 lakh crore or 61.5 percent of the budget estimate versus 63.3 percent in the corresponding period of FY21. Nayar says the 15 percent increase in revenue expenditure offset the sharp contraction in capital spending in the third quarter. Total government expenditure was up by five percent versus 21 percent during the same period last year. Moreover, the rise in capital and revenue spending did not outpace the growth in revenue collections.

“The government’s increase in spending has not been in line with the high growth in revenue collections,” says Gupta. Pant points out, “Expenditure on subsidies during April-November was only 68.5 percent, with major savings in petroleum subsidies, where only 9.5 percent of the budgeted amount was spent.” Dismal capital spending can slam the brakes on growth. Nayar says, “The subdued rise in government spending so far does not augur well for the pace of GDP growth. Although expedited transfers to the States may provide some support.” Rakshit is optimistic that capital spending will pick up in the next three months. “The pace of infrastructure spending could have been higher, but there were challenges due to the second Covid wave, seasonal impact on construction,” he adds.

Rao is unfazed. He says he is more concerned about the government’s path towards fiscal consolidation, and conservative government spending is a step in that direction. He expects supply chain disruptions to continue in the coming months. “Unless issues like shortage of chips, power and coal are resolved, GST collections will not sustain in the coming three months.”

The dominant view is that the government will not stray from its plotted fiscal roadmap in the current financial year. But the yield on the 10-year government bond has crossed 6.5 percent—the highest since February 2020—signalling an element of discomfort in the money market. 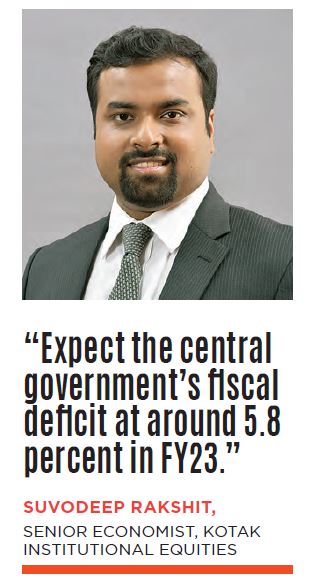 “The market is not just reacting to the FY22 fiscal target, but the fiscal deficit for the coming year. The government has stayed away from giving any guidance on the future path of fiscal consolidation given the uncertainties around the Covid situation,” explains R Sivakumar of Axis Mutual Fund. The government is likely to stick to its growth agenda and support the nascent signs of economic recovery, implying the need for higher borrowing to finance the deficit. Kotak Institutional Equities expects the central government’s fiscal deficit at around 5.8 percent in the next fiscal; 5 to 5.5 percent in FY24; 4 to 5 percent in FY25; and between 3.5 percent and 4.5 percent in FY26.

Besides, the market is also resetting expectations from the central bank, although RBI Governor Shaktikanta Das has time and again reiterated the central bank’s resolve to do whatever it takes to support growth. The likelihood of a shift towards a neutral policy stance has gathered momentum in the face of spiralling retail and wholesale price inflation.

Liquidity tightening is also underway, and brokerages do not rule out rate hikes in the current calendar year. Sivakumar believes yields will rise more on the shorter end of the curve. “Currently the yield curve is very steep, we expect it to substantially flatten this year,” he adds. Nayar expects the 10-year yield to intermittently harden as the central bank moves towards policy normalisation. “Yields could climb to 6.7 percent in Q4FY22 if the government has to raise additional funds in March to offset the lower-than-budgeted disinvestment inflows,” she notes. The LIC IPO is the joker in the pack that can swiftly turn around the fiscal situation and the sombre mood on Mint Street.