Despite being the fastest-growing large economy, it hasn't been able to attract big multi-billion-dollar investments from large MNCs for manufacturing facilities in the country although FDI in manufacturing has soared 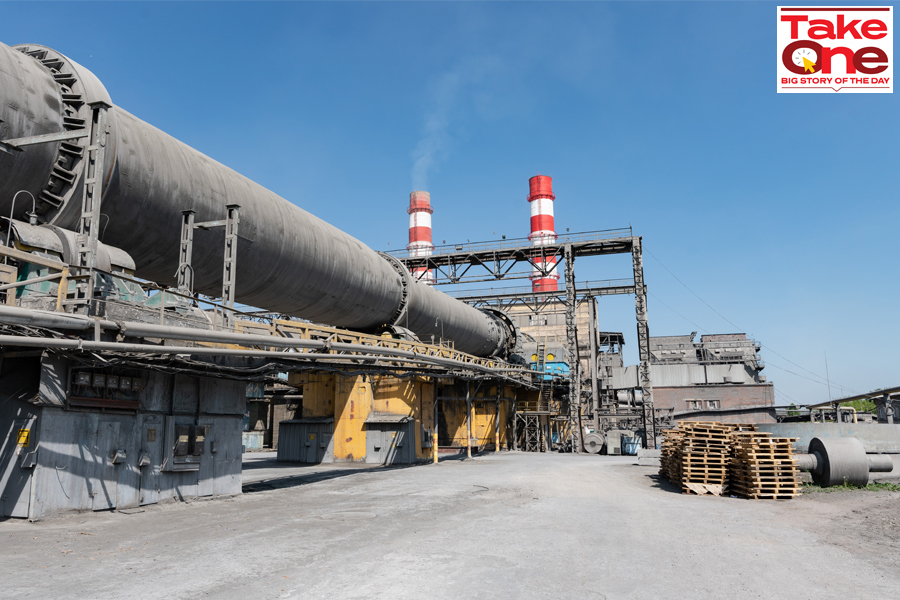 Why would companies not want to grow their manufacturing footprint in the fastest-growing economy? Especially when the world’s factory, China, is struggling with serious economic challenges

Former Reserve Bank of India (RBI) governor Raghuram Rajan has often expressed why India must focus on expanding its services sector rather than replicating China’s model of manufacturing-led growth. It is a template that hasn’t worked for India for the past many years, he argues. But manufacturing is central to the government’s agenda as it strives to achieve a double-digit GDP growth rate.

The Narendra Modi government has rolled out the red carpet for foreign companies to invest in India’s growth story. In the past, several major multinational companies (MNCs)—Cairn Energy, Hutchison, Docomo, Lafarge, Carrefour, Daiichi Sankyo, Henkel—have exited the country, citing an unfriendly business environment among other reasons. Between 2014 and November 2021, over 2,700 foreign companies and their subsidiaries have shut shop in India.

The past five years, particularly, have marked the exit of reputed international automakers from India (see table). Macroeconomic factors and shifts in corporate strategy are partly accountable for this. But a common refrain from offshore strategic investors is that India is a difficult place for manufacturing. Is this only an issue of perception? The government would wish to believe it is.

However, experts say these are largely financial investments by private equity funds and not long-term strategic players. Actually, several multinational firms have trimmed their exposure to India and have hived off assets, including manufacturing plants to domestic companies (see table). Plus, a weak capex cycle has pushed many foreign players to curtail expansion plans. 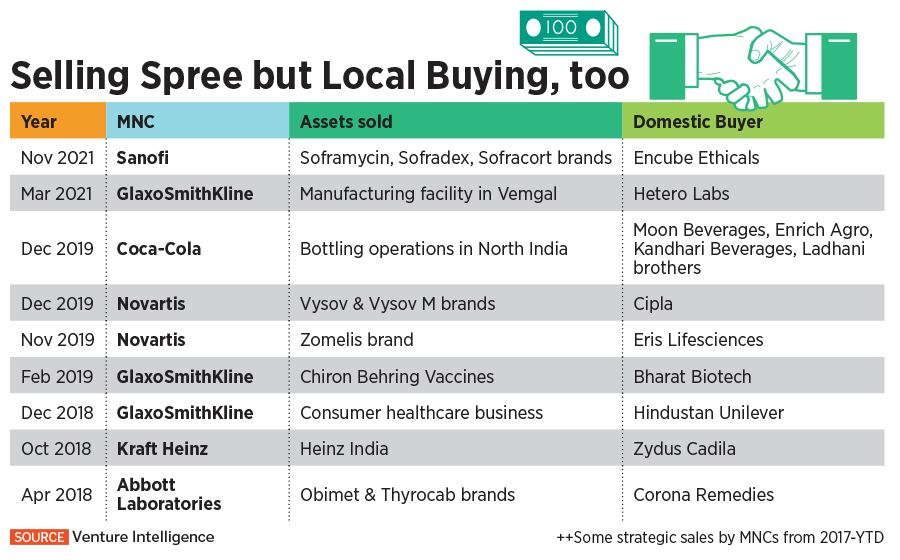 But India is a country of 1.4 billion people with a rising middle class. On the face of it, the country presents untapped growth potential. Why would companies not want to grow their manufacturing footprint in the fastest-growing economy? Especially when the world’s factory, China, is struggling with serious economic challenges. The answer lies somewhere in the complexities of an uncertain and volatile regulatory landscape.

In recent years, the exit of five international automakers has cast a cloud on India as an attractive destination for companies. Despite being the fifth-largest market for cars, major players like Ford, General Motors, Harley Davidson, and Man Truck and Bus have pulled out of India. The economic cost coupled with inconvenience to existing customers has made these exits worrisome even though these companies catered to a niche market (see table).

General Motors found manufacturing and catering to the domestic market tough. Mounting losses amid rising competition prompted it to halt operations. Furthermore, exiting the market was ridden with legal challenges and delays. Ford pulled out for similar reasons and took a $2 billion restructuring hit. Harley-Davidson found itself grappling with rapidly declining sales in a price-sensitive market.

Hefty tariffs, archaic labour laws, fragile policy frameworks and regulatory uncertainty compounded unfavourable growth conditions in an unfamiliar territory. Another concern is the acquisition of land with clear titles without bribery and conflict. Very often, land and project approvals are in limbo for months. Availability of cheap and stable electricity is often an issue.

Puneet Gupta, Director, Automotive Sales Forecast India & Asean, S&P Global Mobility, says there a little clarity on taxes and this affects long-term corporate planning and strategy. “The regulatory environment is very volatile. This makes it difficult for global players to flourish. For domestic companies, it is different. They are used to the policy landscape and can respond swiftly to changes since the management is local. This is not the case for MNCs,” he adds.

Under the recently introduced production linked incentive (PLI) scheme, the government has committed to allocate Rs1.97 lakh crore to 13 sectors, including manufacturing of pharmaceuticals, mobile and electronic components, for five years. But Gupta says the “ifs and buts” in the fine print of the scheme are not easy for long-term foreign investors to navigate.

For instance, the PLI scheme requires companies to meet a certain turnover threshold over five years to claim incentives. “Policies need to be simple and stable. One cannot accurately predict how the industry and economy will be in five years. So foreign players will not take this kind of risk, and India is not the only country where they can invest,” Gupta explains.

Besides, India’s slow adoption of rapidly evolving technology and the lack of skilled labour and innovation are seen as hindrances. Yet, these are not the only reasons that trigger the exit move.

Also read: Why India's robust economy is not churning out jobs

The division between developed and developing markets is getting stronger. Earlier, companies could bet on cheap labour and tax advantages to manufacture units for the domestic market and exports to western markets. This has changed.

For instance, the technological shifts in European and other advanced markets have made the option of common production for both markets unviable given the variance in regulatory specifications and technological compatibility. Plus, the high level of import duties is a constraint.

Global companies are re-allocating investment towards advanced and more profitable markets in comparison to emerging markets like India which are yet to catch up on sophisticated technology.

Explains Gupta, “The cars which sell in the US or other western markets are very different from the cars that sell in India because customers in developed markets are willing to spend more and the level of tech adoption is much higher.”

A case in point: Electric vehicles (EV). While many western nations are migrating to EVs, India is yet to build infrastructure to support the use of EVs in terms of charging outlets, for example. 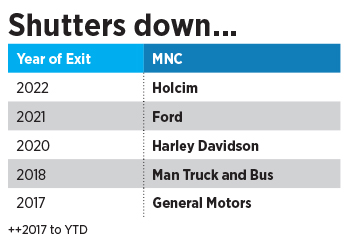 In India, the average price of a vehicle is around Rs7.5 lakh or approximately $10,000. “This is one big reason MNCs have not been able to make money in India,” opines Gupta. Thin margins in a competitive and price-sensitive market have pushed many companies to the brink.

Ill-suited product lineup that was not adapted to suit young Indian consumers, a flawed marketing strategy and expensive prices led to Harley-Davidson’s decision to end business operations in India as it lost market share and incurred huge losses.

In India, Hyundai Motors and Maruti have a combined market share of 60 percent. These companies understand the needs of the domestic market and sell cheap and compact cars that are more suitable for the road and traffic conditions of India.

Also read: Investors call it the 'Amazon of Construction'. Meet the builders of Infra.Market, the now $2.5 billion behemoth

The average consumer is value conscious and price sensitive. MNCs often are not able to cater to this area of preference. In effect, they have steadily lost market share to local players. Price wars further erode profitability. Local players have gained an edge in this area.

The western world’s focus on green and sustainable manufacturing models to comply with ESG metrics is also responsible for cutbacks in India investments. Holcim, a global cement manufacturer, sold out its India operations to Adani Enterprises in May.

Holcim said the decision is in line with its strategy to work towards reducing carbon footprint and focusing on sustainable models of production as it rejigs its product portfolio.

Globally, companies want to associate with sustainable production models that hinge on green and clean energy, as they rush to comply with ESG metrics and lower their carbon footprint.

There are cracks and structural challenges to address in the manufacturing sector. The global slowdown in economic activity has prolonged the pain for companies, but its long-term growth potential is intact. 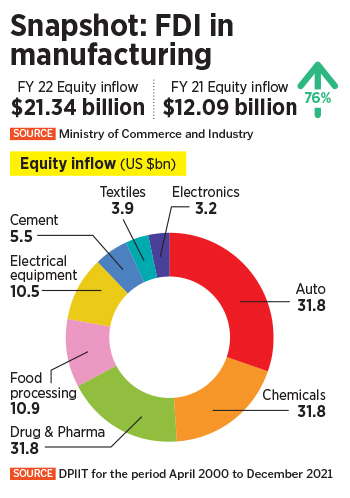 Madhavi Arora, lead economist at Emkay Global, believes policies come into effect with a time lag and says it may take 10 years for the reforms in the manufacturing sector to show durable results as the global economy recovers.

“The manufacturing sector in India has not been robust as there hasn’t been much progress given several underlying issues. But I don’t think India has lost its sheen for MNCs,” says Arora. 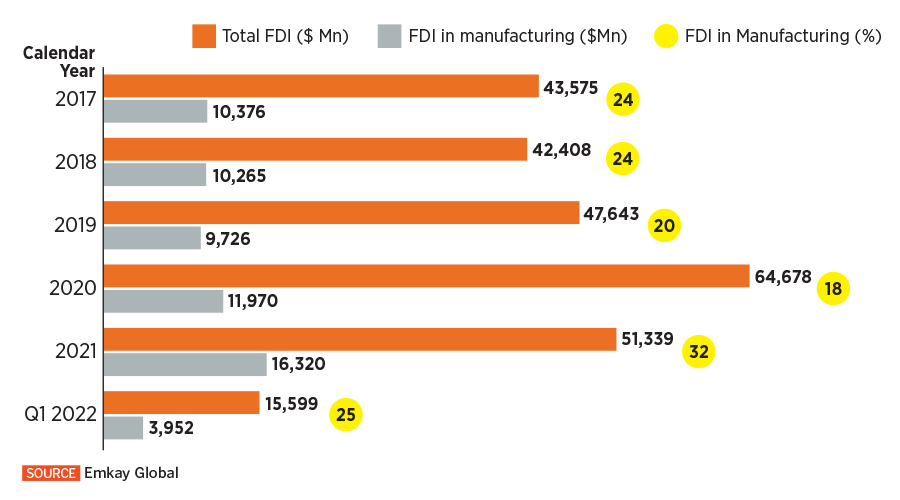 Toyota Motor has partnered with Suzuki Motor to roll out a SUV model to be developed by the latter at Toyota’s Bidadi manufacturing facility. Hyundai plans to invest Rs4,000 crore in the EV segment and Kia is ready to pump in close to Rs5,000 crore in the Anantapur plant. Three Apple suppliers, including Foxconn, are looking to invest around Rs4,000 crore for manufacturing facilities in India.

Consider the contrasting fates of Ford and Hyundai Motors in India. Both the companies set up shop in India around the same time. Ford sold cars designed for western markets, and Hyundai focussed on launching cars which were in tune with the needs and preferences of local users.

Decades later, Ford has exited India on a sour note, but Hyundai is currently the second-largest automobile company in India in terms of market share. The story is telling of the huge potential India has for companies that are able crack its code.

Tweets by @forbesindia
Ecuador warns protests could force halt to oil production
As US undoes abortion rights, Chile works to enshrine them