Why India's robust economy is not churning out jobs

Even as India is projected to have the fastest growth of any major economy this year, the rosy headline figures do not reflect reality for hundreds of millions of Indians: That growth is still not translating into enough jobs for the waves of educated young people who enter the labour force each year and a far larger number of Indians eke out a living in the informal sector

By Emily Schmall and Sameer Yasir 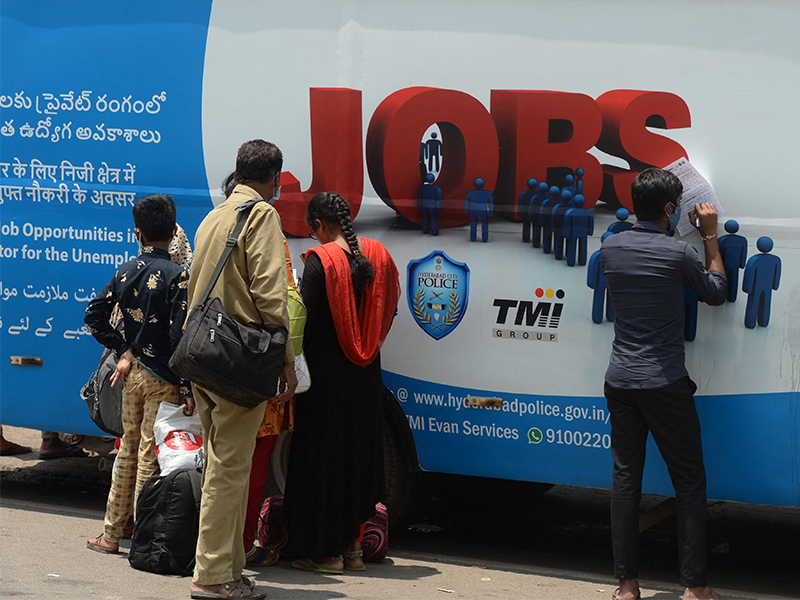 Unemployed youths fill application forms to access job openings in the private sector outside an "employment van" during an initiative by TMI foundation and Hyderabad city police, in Hyderabad. Image: NOAH SEELAM / AFP


NEW DELHI — On paper, India’s economy has had a banner year. Exports are at record highs. Profits of publicly traded companies have doubled. A vibrant middle class, built over the past few decades, is now shelling out so much on movie tickets, cars, real estate and vacations that economists call it post-pandemic “revenge spending.”

Yet even as India is projected to have the fastest growth of any major economy this year, the rosy headline figures do not reflect reality for hundreds of millions of Indians. The growth is still not translating into enough jobs for the waves of educated young people who enter the labor force each year. A far larger number of Indians eke out a living in the informal sector, and they have been battered in recent months by high inflation, especially in food prices.

The disconnect is a result of India’s uneven growth, which is powered by the voracious consumption of the country’s upper strata but whose benefits often do not extend beyond the urban middle class. The pandemic has magnified the divide, throwing tens of millions of Indians into extreme poverty while the number of Indian billionaires has surged, according to Oxfam.

The concentration of wealth is in part a product of the growth-at-all-costs ambitions of Prime Minister Narendra Modi, who promised when he was reelected in 2019 to double the size of India’s economy by 2024, lifting the country into the $5 trillion-or-more club alongside the United States, China and Japan.

The government reported late last month that the economy had expanded 8.7% in the last year, to $3.3 trillion. But with domestic investment lackluster, and government hiring slowing, India has turned to subsidized fuel, food and housing for the poorest to address the widespread joblessness. Free grains now reach two-thirds of the country’s more than 1.3 billion people.

Those handouts, by some calculations, have pushed inequality in India to its lowest level in decades. Still, critics of the Indian government say subsidies cannot be used forever to paper over inadequate job creation. This is especially true as tens of millions of Indians — new college graduates, farmers looking to leave the fields and women taking on work — are expected to seek to flood the nonfarm workforce in the coming years.

“There is a historical disconnect in the Indian growth story, where growth essentially happens without a corresponding increase in employment,” said Mahesh Vyas, CEO of the Center for Monitoring Indian Economy, a data research firm.

Among the job seekers despairing over the lack of opportunities is Sweety Sinha, who lives in Haryana, a northern state where unemployment was a staggering 34.5% in April.

As a child, Sinha liked to pretend to be a teacher, standing in front of her village classroom with fake eyeglasses and a wooden baton, to fellow students’ great amusement.

Also read: The economic consequences of the war

Her ambition came true years later when she got a job teaching math at a private school. But the coronavirus upended her dreams, as the Indian economy contracted 7.3% in the 2020-21 fiscal year. Within months of starting, she and several other teachers were laid off because so many students had dropped out.

Sinha, 30, is again in the market for a job. In November, she joined thousands of applicants vying for much-coveted work in the government. She has also traveled across Haryana seeking jobs, but turned them down because of the meager pay — less than $400 a month.

“Sometimes, during nights, I really get scared: What if I am not able to get anything?” she said. “All of my friends are suffering because of unemployment.”

But for Indian politicians, a high unemployment rate “is not a showstopper,” said Vyas, the economist, adding that they were far more concerned with inflation, which affects all voters.

India’s reserve bank and Finance Ministry have tried to tackle inflation, which is battering many countries because of pandemic-related supply chain problems and the war in Ukraine, by restricting exports of wheat and sugar, raising interest rates and cutting taxes on fuel.

The bank, after raising borrowing rates in May for the first time in two years, increased them again Wednesday, to 4.9%. As it did so, it forecast that inflation would reach 6.7% over the next three quarters.

Reserve bank officials have also employed an array of fiscal and monetary tactics to continue supporting growth, which cooled in the first quarter, falling to 4.1%. Household consumption, a major driver of India’s economy, has dropped in the last few months.

“We are committed to containing inflation,” said the bank’s governor, Shaktikanta Das. “At the same time, we have to keep in mind the requirements of growth. It can’t be a situation where the operation is successful and the patient is dead.”

Also read: First the pandemic, then war affect markets, economy but all is not lost

While the Bank of England and the Federal Reserve in the United States have said their countries need to accept lower growth rates because of high commodity prices, India’s reserve bank is not in that camp, said Priyanka Kishore, an analyst at Oxford Economics. “Growth matters a lot for India,” she said. “There’s a political agenda.”

The ban on food exports is a sharp turnabout for Modi. In response to Russia’s blockade on Ukrainian ports, which has led to a global shortage of grains, he had said in April that Indian farmers could help feed the world. Instead, with the global wheat shortfalls driving up prices, the Indian government imposed an export ban to keep domestic prices low.

Temporary interventions like these are easier than addressing the fundamental problem of large-scale unemployment.

“You have wheat in your godowns and you can ship it out to households and get instant gratification,” Vyas said, referring to storage facilities, “whereas trying certain policies for employment is far more protracted and intangible.”