First the pandemic, then war affect markets, economy but all is not lost

Rising fuel prices and inflationary pressures have led economists and analysts to lower growth and earning forecasts. However, they are bullish there will be pockets of growth and long-term fundamentals will remain intact, providing a cushion to long-term investors 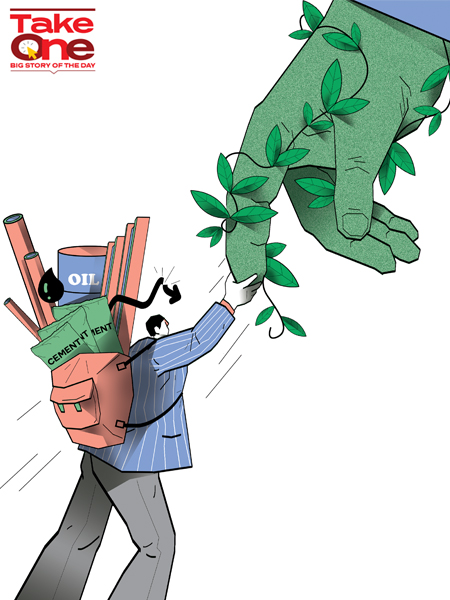 The start of FY23 will, for the third year in a row, be a tricky one for investors. The debate of hedging for inflation has intensified rapidly in the past few weeks, as global crude oil and commodity prices have surged after Russia’s attack on Ukraine. The year had started with growing murmurs of how central banks across the world will start to raise interest rates to tackle rising inflation as their economies grew out of sluggish business activity during the pandemic.

Global supply chains have been disrupted because of the Russia-Ukraine conflict, with economic sanctions against Russia. This has started to impact global trade, since Russia is a leader across several industrial and agro commodities: It accounts for nearly 17 percent of global natural gas production, 10 percent of global crude oil production, 9 percent of global aluminum trade and is the largest exporter of wheat, commanding 18 percent of international exports.

Already hurt by foreign fund outflows since October 2021, Indian equities continue to slide. India’s Nifty 50 has corrected about 4.5 percent since the Ukraine invasion, but is down by about 12 percent from its October-peak. The India VIX, the volatility index based on the Nifty 50 index, hit a 15-month-high of 31.98 on March 4, largely due to the weakening macroeconomic news.

In March, Brent oil hit a 14-year high of $139 per barrel and retail inflation in India—based on the Consumer Price Index—stood at an eight-month high of 6.07 percent in February, data on March 15 showed. This is well above the 4.5 percent inflation which the Reserve Bank of India (RBI) has projected for FY23.

Several financial institutions have started to revise downwards their FY23 growth forecast. Citi projects India to grow at 8 percent in FY23 from an earlier 8.3 percent, while Nomura forecasts, in a worst case scenario, 6.5 percent. 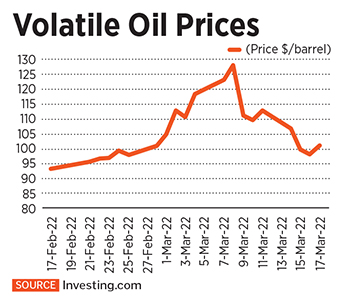 It also means that central banks will need to walk the tightrope, managing inflation with growth concerns. “Central banks will now have to perform the delicate-yet-crucial task of steering the economies through this commodity spike-driven inflationary headwind, while ensuring that demand does not fall off the cliff,” says Gautam Duggad, head of research, institutional equities at Motilal Oswal. The RBI’s next monetary policy announcement is scheduled for April 8.

The surge in commodity prices has led Duggad and his team to revise downwards the FY23 earnings estimates for cement, auto and consumer segments as raw material costs and lower demand will impact earnings, while metals and oil and gas are seeing an upward revision in earnings estimates, due to rising prices.

The rise in input costs for several corporates will hurt margins growth for the coming quarters, though topline growth is unlikely to be affected. Nitin Raheja, executive director, head discretionary equities, Julius Baer, says, “In FY23, material-related companies—cement, agro-chemicals, and PVC pipes—will see pressure on their earnings due to rising input costs.”

The cement sector’s fortunes are a real concern, with prices of petcoke, international coal and diesel, which account for 55 percent of costs, going up by 92 percent, 211 percent and 18 percent year-on-year, respectively, according to an ICICI Securities report. Rashesh Shah, assistant vice president, ICICI Securities, expects the cement sector margins to decline by 98 basis points (bps) in Q4FY22E and by 498 bps in FY23E. As higher input costs will start to hurt Ebitda estimates, companies with stronger balance sheets will perform better than highly leveraged ones.

Automobile companies, which faced a tough 2021 due to sluggish demand and a global shortage of semiconductors (critical components in features such as navigation and traction control), are unlikely to see a quick revival of fortunes. The rise in raw material costs, from glass to rubber and aluminium and steel, will lead to higher prices and lower demand, besides the continuing semiconductors’ shortage.

An expected rise in domestic fuel prices cannot be ruled out and this will lead to demand deferment across segments. Thus manufacturers such as Tata Motors, Maruti Suzuki and Hero MotoCorp will get impacted.

Investors will need to lower their expectations of returns from the stock markets for 2022. India’s stock markets in 2021 showed a 20 percent gain, while the primary markets saw a surge of companies raising in excess of ₹1.2 lakh crore through initial public offerings (IPO) and offers for sale.

Morgan Stanley’s Ridham Desai has cut their FY23 earnings estimations by 8 percent to reflect a lower GDP forecast. “We expect earnings to compound at 22 percent annually (24 percent previously) over the coming two years,” he said in a note to clients in March. He added the “market is likely to find a floor sooner than later. That said, a rise in domestic policy rates may bring another bout of volatility beyond geopolitics”. 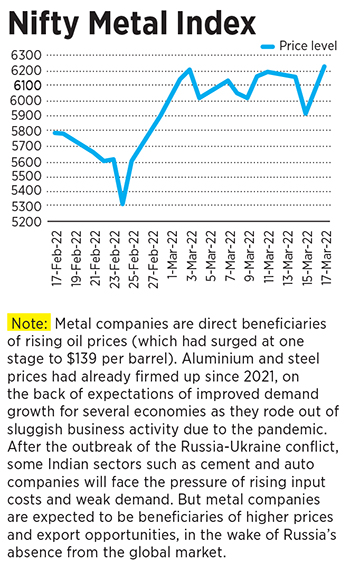 He has also lowered the Sensex target for December 2022 by 11 percent, which works out to 62,000 in a best-case scenario. It assumes that the Russia-Ukraine conflict will end in weeks, future Covid-19 waves will not result in major restrictions of economic activity, and a recovery in growth. It also expects government policy to remain supportive and the RBI to undertake a calibrated exit. Company policy prevents Morgan Stanley economists from commenting on the Russia-Ukraine crisis and its impact on the economy.

Motilal Oswal’s Duggad, in the Russia strategy report, said the Nifty 12-month forward P/E is trading at its 10-year average for the first time since November 2020. In the current scenario, we are unlikely to see a repeat of this in 2022. Fintech Mobikwik will continue to wait until market conditions stabilise, while food delivery giant Swiggy is expected to launch its IPO only in early 2023.

The mega offering for the Life Insurance Corporation of India is now expected to come through only in the early part of the new financial year. “Demand for IPOs will dry up until the market stabilises and the Nifty pulls back closer to the 18,000 level,” says Samit Vartak, founding partner and CIO of SageOne Investment Advisors. But Vartak is confident that despite pockets of concern, India’s growth story is still intact with a larger portion of companies having improved balance sheets.

The government’s own position is also better due to better tax collections and lower subsidies. Corporates will hope that the rupee does not depreciate too much against the dollar (from its current $76 level), as it will hike the cost of overseas borrowings.

Most war-like situations force nations to become more protectionist in their approach. Duggad says the overarching macro policy theme during the pandemic was self-reliant India (Atmanirbhar Bharat). “The Russia-Ukraine conflict will accelerate the same, especially in defence,” he says.

Baer’s Raheja agrees, saying the government’s “return to manufacturing” theme, with a thrust towards job creation and lower import dependency, will be something India needs to capitalise on, particularly considering that China’s growth is faltering. Julius Baer in its portfolio management service, catering to high net worth individuals and family offices, has its focus on India’s financial sector (which has a 30-40 percent index weightage), technology and PLI-linked manufacturing.

Most analysts Forbes India spoke to indicate India’s banks and financial services sector are likely to emerge relatively unscathed from the current market correction. Though credit growth is likely to remain a concern, the balance sheets of most top banks is better than earlier and non-performing assets (NPAs) are inching lower. The Nifty Bank index is down by 12 percent from its October peak to 35,651 points on March 16, but this is largely due to the sustained foreign funds sell-off and not entirely reflective of the financial health of India’s banks.

India’s rapid technology spend is likely to have a positive economic impact. Research and consulting firm Gartner estimates that Indian companies will spend $105.2 billion on IT in 2022, a 5.5 percent year-on-year rise. India hires 5-10 lakh engineering graduates each year and it is believed that for every engineer hired, three other jobs get created. The impact of aggressive hiring in technology has a positive impact on consumption, retail and real estate.

Ashish Gumashta, managing director and CEO of Julius Baer India, says: “We could see business in India getting hit for one or two quarters, but companies whose pricing power is strong will remain attractive. Earnings challenge will be short term, otherwise India is in a multi-year growth story.”

We are then looking at a scenario where India’s equities and earnings will get impacted through much of the year, but over the medium to long term, they are likely to emerge as the best bet on returns compared to other asset classes such as real estate, gold or even cryptocurrencies.

Tweets by @forbesindia
World no. 1 Ashleigh Barty retiring from tennis at just 25
Myths and Facts Around Diabetes