The mosquito incense market is largely illegal and unorganised. Goodknight hopes its Jumbo Fast Card will be the one-stop solution to slay both—the mosquitos and the competition 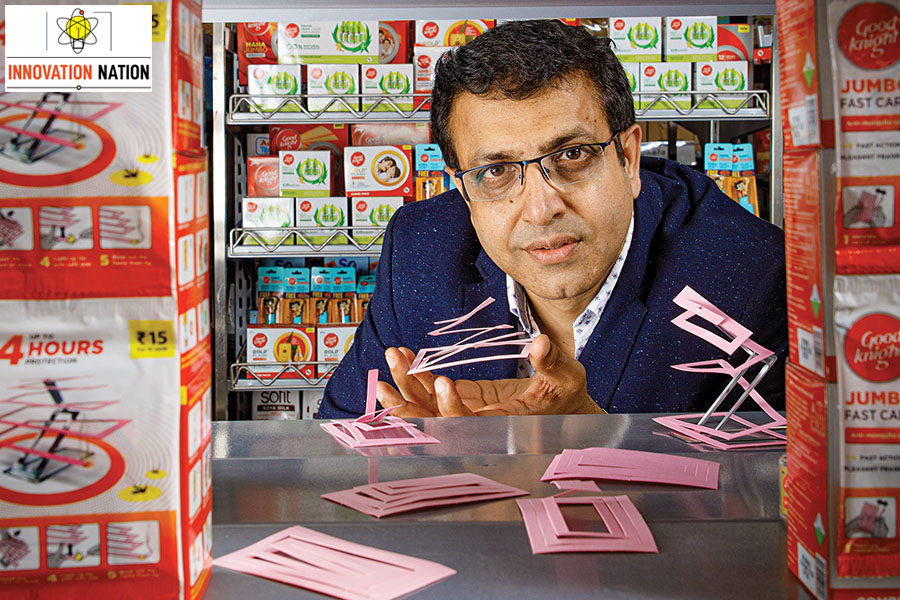 At times, what matters most is not ‘how much’, but ‘how long’. While ‘kitna deti hai?’ might be the right question to ask when one buys a bike or a car, the question gets twisted while purchasing another product. Take, for instance, in a category like mosquito repellent, the burning question is kitna chalta hai (how long does it last?) rather than ‘how quickly does it kill?’ Makes sense. Why? In India, close to 50 percent of mosquito repellents used are burning formats.

Nobody perhaps knows the difference between ‘much’ and ‘long’ better than Sunil Kataria. For years, the chief executive officer of Godrej Consumer Products (India and SAARC) struggled to stub out the unique selling proposition USP—lamba chalta hai—used by illegal mosquito repellent incense stick makers to woo users.

Kataria explains. In 2013, Goodknight, India’s biggest mosquito repellent brand by value and volume, rolled out Fast Card, a paper-based product, which was affordable, accessible and effective in killing mosquitoes. The product was an instant hit. “It became a ₹100-crore product in the first year,” says Kataria. The success, in fact, was a no-brainer. With a price tag of ₹1, Fast Card helped Goodknight find mass appeal. The love story started blossoming.

After two years, entered the villain. Small, fly-by-night operators rolled out illegal mosquito repellent incense sticks. They started small from Karnataka, made it the production hub, and then moved into the eastern part of the country. Sticks were silently scripting a blockbuster for a couple of reasons. First, loaded with harmful chemicals and pesticides, they had a drop-dead effect. Second, they were cheap and widely accessible. In India, it is estimated that only 50 percent of the population use any home insecticide (HI) product. Third, being in the form of incense sticks gave them a wider acceptance. In fact, some of them positioned themselves as herbal or natural.

Kataria, though, will tell you the X-factor which made such sticks spawn into an over ₹800-crore market across the rural belt of West Bengal, Northeast, Bihar, Jharkhand, Chhattisgarh, and Maharashtra. “People thought sticks lamba chalta hai,” he says. Fast Card, he rues, was overtaken by illegal sticks. And there was only one reason: It burnt for a longer duration. 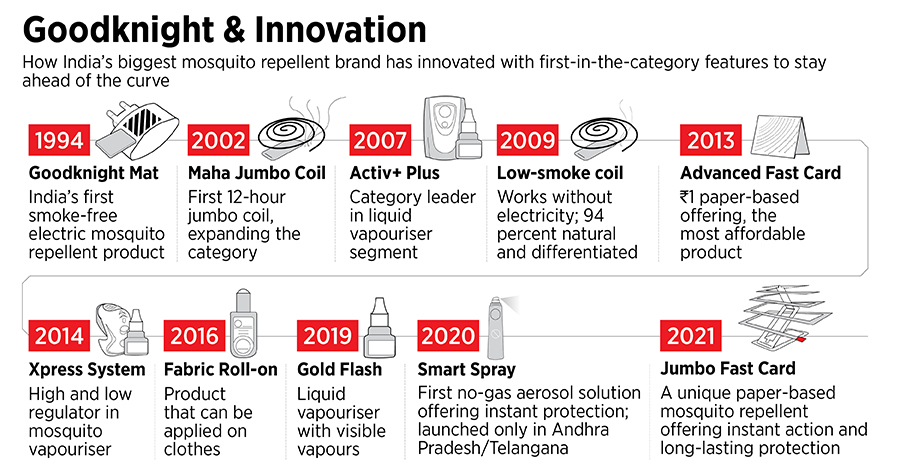 The company also rolled out natural incense sticks to take on the illegal counterparts. It didn’t work, though. Reason: Natural sticks did not perform well from an efficacy perspective. They didn’t have a knockdown effect, and couldn’t compete with the rival which was more muscular due to harmful chemicals.

Nisaba Godrej, executive chairperson and managing director of Godrej Consumer Products, explains what went wrong. Illegal incense sticks, she underlined in the Q1 earnings call of FY22 in August, burn for 30 to 45 minutes. Though Fast Card was effective against illegal incense stick, it burnt in three minutes.

Kataria decodes why the long-burning stick became sticky with users: Impact lasted for four hours. In contrast, Fast Card was effective for two hours. Clearly, the fight against illegal sticks had to be waged with an innovative weapon that lasted long.

Enters Jumbo Fast Card, a spiral-shaped paper card. “It burns for 45-60 minutes, and has a residue effect for about four hours,” Godrej mentioned in the earnings call. The brand also ensured that product stayed affordable and accessible: ₹15 for 10 cards. “So, it is directly against illegal incense sticks in terms of the job to be done for the consumer,” she underlined.

Jumbo Fast Card, reckon marketing experts, might turn out to be the silver bullet in the fight against illegal sticks. “It is potent, affordable, safe and burns long,” says Ashita Aggarwal, marketing professor at Bhavan’s SP Jain Institute of Management and Research in Mumbai. “It has blunted the rival’s weapon in one go.” What the company must now do is spread awareness about the new product and its impact on a war footing. The reason is simple. When one is fighting an unscrupulous enemy, delay of every minute could cost massive in terms of harm done to consumers. 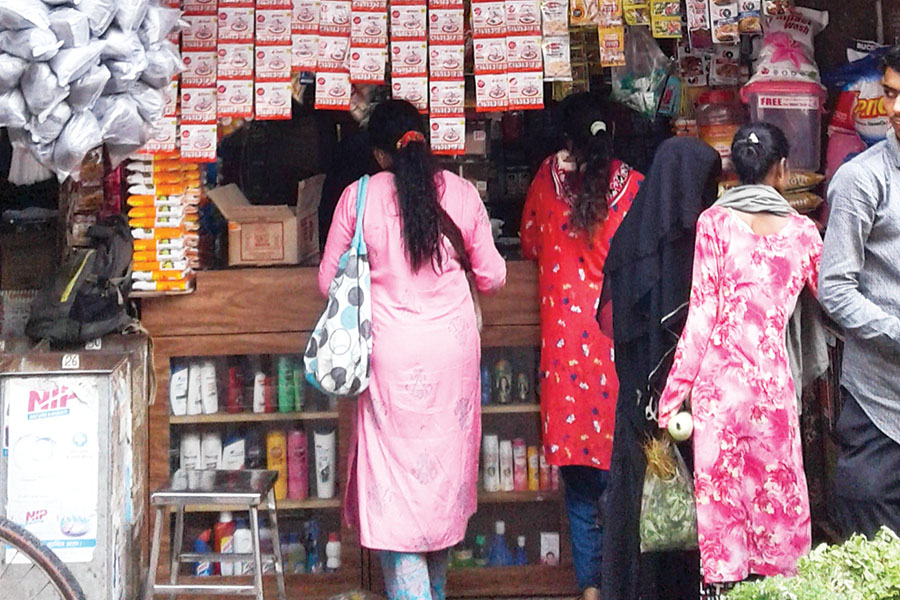 A kirana shop sells paper coils, a burning format, used by most people in India

There is another reason why the Jumbo Fast Card must spread like wild fire: To increase penetration. In rural India, around 60 percent of people don’t use any HI product, points out Aggarwal. Even among those who use them, a dominant majority use coils, a burning format. “An affordable and effective solution will result in wider adoption,” she adds.

Experts, though, point out that the leader must keep innovating to win the fight. Goodknight has been a massive success, but it must keep coming up with out-of-the-box thinking and products to fox illegal stick players, says Abneesh Roy, executive vice president at Edelweiss Securities. Call it the Covid impact, the stick market, has stagnated over the last year or so. But the threat is still there. 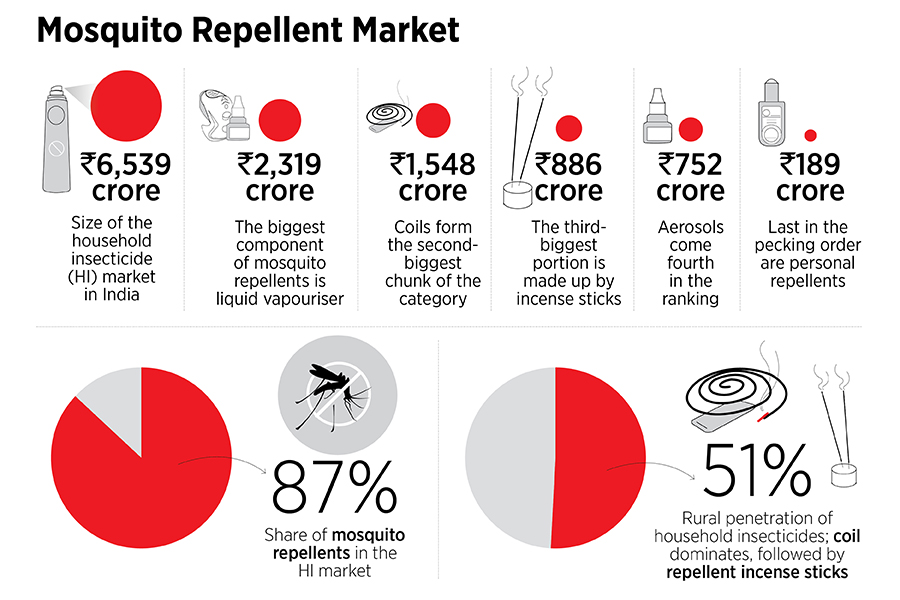 Kataria points out that there has been no let-up in reaching out to consumers to make them aware about the consequences of using illegal sticks. Home Insect Control Association, a non-profit making industry body promoting safe use of household insecticides, has been spearheading a drive—television, digital, print and out-of-home campaigns—to create awareness around sticks laced with pesticides and harmful chemicals. “Jumbo Fast Card is the result of our deep understanding of the category and know-how of what the country needs,” he says. It will, he sums up, reinforce India’s war against the mosquito-borne diseases.

Tweets by @forbesindia
Meet the 21-year-old inventor of Neuro-Exoheal, a wearable device to help patients with hand paralysis
5 Steps to effectively design and execute brand purpose