Meet the 21-year-old inventor of Neuro-Exoheal, a wearable device to help patients with hand paralysis

Zain Samdani's keen interest and research on improving the quality of life of people with paralysis has led to the development of a wearable device, whose sensory and exoskeletal robotic gloves can ensure sensation in a paralysed hand 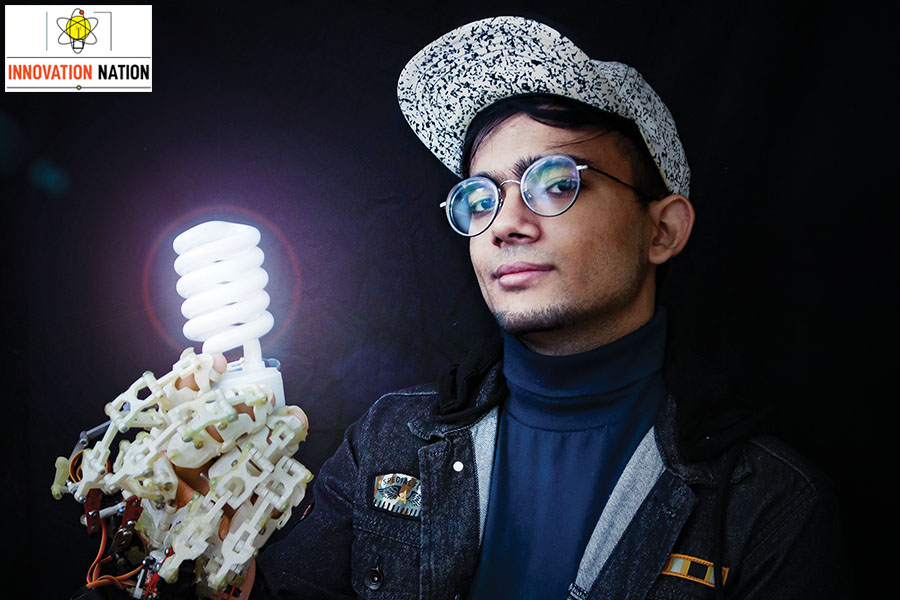 During a family vacation in 2015, Zain Samdani met his distant maternal uncle for the first time. The then-teenager was shocked to see him partially paralysed due to a stroke; he could barely respond and was unable to even lift a spoon.

“Imagine what it would be like to have another person help you out for every little activity in your life?” says Samdani.

On researching about paralysis, Samdani found out that the rehabilitation is time-consuming and psychologically strenuous, and that robotic rehabilitation sessions cost as much as ₹8,000-12,000 per session. “When I visited a couple of these [rehab] centres, I realised the patients had to travel there, which was extremely painful. Additionally, though the sessions were expensive, I couldn’t see much modern technology being used,” says the now-21-year-old. These observations led him to develop Neuro-ExoHeal, a wearable device, to help patients with hand paralysis.

The device is divided into a sensory glove for the functional hand and an exoskeletal robotic glove for the paralysed hand, based on the concept of neuroplasticity. Samdani found out about this concept when he was reading The Brain that Changes Itself by Norman Doidge, and realised how neuroplasticity could help persons with disability. At that time, he was also working on developing affordable prosthetic hands. “Things just clicked and everything just pieced together,” he says. Given how complicated the subject was, Samdani had to extensively research on it—secondary, as well as primary research, including meeting a lot of neuroscientists and physiotherapists—before coming up with an innovative solution. 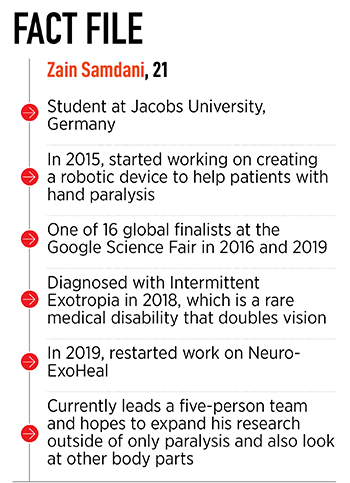 Samdani explains how Neuro-ExoHeal’s technology works: “When a movement is performed by the functional hand, the exoskeleton forces the paralysed hand to mirror the same motion. This mirroring allows the mirror neuron to trick the brain into believing that the paralysed hand is alright, forming new neural connections and reviving the paralysed hand.”

For this innovation, Samdani was one of 16 global finalists at the Google Science Fair in 2016 and 2019. He is associated with the KV Rao Scientific Society in Hyderabad, where he has been working on research and design of the device since December 2020.

While Samdani was in the midst of his research, around 2018, he was diagnosed with Intermittent Exotropia, a rare medical disability that doubled his vision every two to three hours. It would be too much of a mental strain for him, and he would eventually collapse.

It took about four months to diagnose the disability and start treatment for it. “This condition deprived me of my ability to concentrate on my studies and aspirations, and just lead a normal life,” says Samdani. After three years, Samdani has overcome his temporary disability, but considers it a “blessing in disguise”.

While he was still recovering with the support of his family—his mother being his biggest inspiration—Samdani restarted his Neuro-ExoHeal project. Currently, he leads a five-person team with age groups ranging from 19 to 23, and aims to help patients with hand paralysis have a faster, more comfortable and inexpensive rehabilitation experience. Eventually, Samdani and his team hope to expand to conditions outside of paralysis and also look at other body parts.

As a young innovator, one of the primary challenges Samdani faced was, “dealing with self-doubt and negativity”. He also struggled to get the right support and funding for some of his projects. “I feel,” he says, “the key is to find the right people and ask them the right questions.” 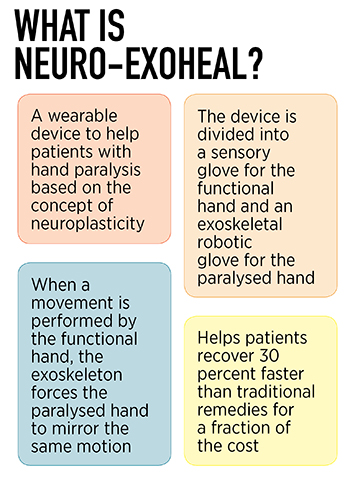 Neuro-ExoHeal has been tested on 30 to 50 patients, and has seen positive results. “When my uncle, for instance, used the device, he was able to feel sensations in his paralysed hand for the first time. I witnessed him holding a spoon… this would normally take weeks or months if you go by the traditional route,” explains Samdani. Similarly, another bedridden patient was able to sit upright without the assistance of another person.

The team was hoping to do a lot more clinical trials during 2020, but the pandemic disrupted those plans. Now, with Samdani studying for his undergraduate degree in robotics and intelligent systems at Jacobs University, Germany, they are hoping to start clinical trials there.

The technology has also been tested under the guidance and supervision of physiotherapists and doctors from Saudi Arabia and India over the last four years. “Our initial examinations have revealed that it [Neuro-ExoHeal] can help afflicted patients recover 30 percent faster than traditional remedies for a fraction of the cost,” he says.

Though the revenue model is something that is yet to be decided, Samdani hopes to make the device extremely affordable. “Of the current devices that are available, the cheapest one costs around ₹7-10 lakh. But we are trying to bring the cost down to less than ₹50,000,” he says.

Samdani hopes to set up a model where patients can rent the device via hospitals, rather than buy it themselves. The device will also come with an application, which connects the patient with the doctor. The doctor can then monitor the patient’s progress and guide them through the rehabilitation routine. All this while the patient is at home.

“We are trying to make the robot more adaptable based on each patient’s progress level. In the next five years, we hope to introduce Neuro-ExoHeal in almost 50 percent of rehabilitation centres in India,” says Samdani.