The billionaires of Ahmedabad 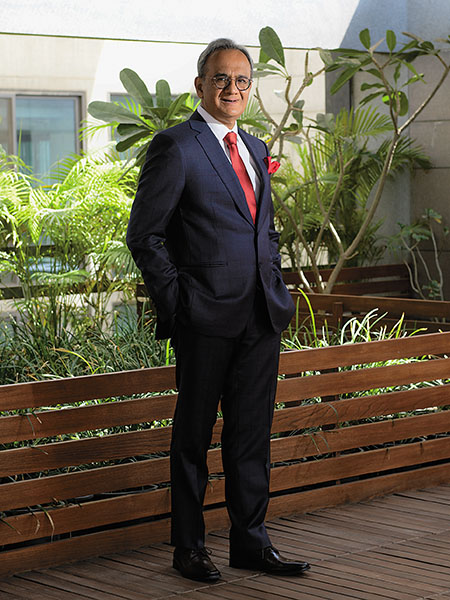 Achal Bakeri, chairman & MD of Symphony
Image: Mayur Bhatt for Forbes India
It was in 1969 that Karsanbhai Patel, a chemist at the Gujarat government’s department of mining and geology, decided to manufacture a yellow, phosphate-free, synthetic detergent powder from a 100 sq ft room. Priced at ₹3.50 per kg—almost a fourth the price of comparable products in the market—and named Nirma, after his daughter Nirupama, Patel would go door-to-door on his bicycle, selling 15-20 packets a day. By 1985, what started as a one-man brand became one of the most popular household detergent labels in India. With a net worth of $4.7 billion, the founder of the Ahmedabad-headquartered ₹5,524 crore Nirma is one of the eight from Gujarat’s industrial capital to feature in Forbes’ World’s Billionaires list. Only Mumbai, Delhi and Bengaluru have more billionaires. Keeping Patel company are fellow Amdavadis like the Adanis, Mehtas of Torrent and Patels of Zydus Cadila. The latest addition is Sandeep Engineer, managing director of Astral Pipes, with a net worth of $1.1 billion.

Gujarat and business have always been synonymous, and many of the established businessmen in the country’s financial capital of Mumbai—from Dhirubhai Ambani to Uday Kotak—are Gujaratis. Over the years, though, a number of industrialists who preferred to remain in the state—primarily Ahmedabad—have entered the big league, be it the Adani Group, Torrent or Cadila. The journey of these eight billionaires is evidence of the spirit of entrepreneurship of Ahmedabad and the passion to build something from scratch. A few of these billionaires are the next-generation of founders who started out several decades ago. The Torrent group, for instance, was founded by UN Mehta—father of Sudhir and Samir Mehta—in the late 50s; today, the business has reached the third generation, with Jinal Mehta taking over as the managing director of Torrent Power in 2018. Similarly, the origins of Zydus Cadila go back to 1952, when Ramanbhai Patel founded it. Intas Pharma was set up in 1976 by Hasmukh Chudgar, who passed on the baton to son Binish in the late-1980s. Binish is now the vice-chairman and MD of the company.
City of Billions
Infogram
Ahmedabad is one of the country’s premier pharmaceutical hubs, and it’s no surprise that three of the eight billionaires (Intas, Torrent and Cadila) are pharma entrepreneurs. Says Binish, half-joking: “I think the most number of billionaires in the country are from the pharma industry, so I think if you want to become a billionaire, you should join pharmaceuticals.” He has a point: In the 2018 Forbes India Rich List, for instance, every fifth billionaire in the top 50 derived his or her wealth from pharma. Pharma and Ahmedabad go back a long way. Today, Zydus Infrastructure may have a special economic zone for pharma companies called Pharmex, but it was 72 years ago that LM College of Pharmacy, the country’s first in the field, was built. “Ramanbhai (the founder of Cadila) and my father are both from LM College,” says Binish.  “At the time, it was a new course, and people who didn’t get into medicine opted for this. It was probably because of the college that a lot of BPharm graduates decided to become entrepreneurs in pharma,” adds Binish. If there is a common trait among the billionaires of Ahmedabad, it is their determination to keep a low profile. If one was to bump into any of them at a social gathering or a public place, it would be difficult to identify them as billionaires. As most of them like to put it, the focus is on work and family. Kairav, Sandeep Engineer’s eldest son, says, “We are firmly rooted to our middle-class beliefs, and we are very family-oriented. In Ahmedabad, there is no Page 3 culture, like you would have in a bigger city, which is why we can keep a low-profile.” But how does being a billionaire help in growing the business? “It helps to an extent, especially during an international acquisition. But that’s also because of the company’s market capitalisation (and not just the promoters’ net worth). It helps in being taken seriously,” explains Achal Bakeri, chairman and managing director of Symphony, a maker of air coolers. Another similarity in Amdavadi, and Gujarati businessmen by extension, believes Bakeri, is the uncanny ability to sniff out opportunity in the unlikeliest of places. “It is a sixth sense. We can smell the money. And with this comes the risk-taking ability, but always calculated risks.” Bakeri is a perfect example, having thought of a business idea in a conversation with his father. The architect-turned-entrepreneur recounts, “We had just moved into a new house (in October-November 1987), and bought a bulky and ugly air-cooler because it was ridiculously hot. Although we did our best to camouflage it, nothing worked. My father was fed up, and finally told me why don’t you design a better air cooler? And the Gujarati within me could smell money right there. By February 1988, I had incorporated the company, and a month later begun the test marketing in Ahmedabad.”

Predictably, working for somebody else doesn’t come easy. Binish was asked to work for a year before he joined the business. The 55-year-old says, “I found the work at my first and only job at a reputed bank extremely boring and slow. I quit in a month and joined the family business.” Karan Adani, a true Amdavadi as he calls himself, has been with the Adani Group since 2009. For Karan, it meant not just growing the business, but taking forward a legacy. From father Gautam—who is part of the World’s Billionaire list with a net worth of $8.7 billion—Karan has learnt a lot. “First and the most important is commitment you give to your people, customers, and community. You have to honour that regardless of the profit you make. And the ability to think big.” Karan also feels that the close-knit community that Ahmedabad is fosters businesses. “Most of the businesses here are family businesses, which is a strength, and makes the entrepreneurs from the city stand out.”  Jaimin Vasa, president, Gujarat Chamber of Commerce and Industry, sums up the qualities of successful businesses from the city. “A far-sighted vision, an enthusiasm to convert the dream into reality, patience to continue even after initial failures and preparedness for the future through meticulous planning are what makes an Ahmedabadi businessmen,” he says. Bhadresh Shah, the genius behind AIA Engineering, a maker of highly-specialised castings that are used in industries like cement, mining and energy, gives more credit to the city than to any of his personal traits. “While it is the spirit of an entrepreneur that makes the company what it is, for a company like ours that is highly dependent on infrastructure, Ahmedabad has played a huge role in its success,” says the managing director of the ₹3,000 crore company. “First of all, ours is a power-intensive industry, and Gujarat has been a power-surplus state all along. Second, there is no harassment from the government. Third, it is very peaceful as far as industrial relations are concerned and, fourth, it is a crime-free place, one can do business quite freely.” From Textiles to Tech
The city that has a textiles industry that goes back to the 19th century has done well to make the transition to tech-enabled and new-age ventures. And this may set the stage for Ahmedabad to produce tech billionaires of its own. Internet firm Infibeam, which is now publicly-listed, Cygnet Infotech, an IT solutions firm, and EroNkan, an internet of things (IoT) startup, are just three of the many ventures that can help Ahmedabad earn its spurs as a tech hub.

So what is it that makes a tech entrepreneur zero in on Ahmedabad, ahead of a Bengaluru or a Pune? “One thing that attracted us to the city was a better quality of living. Second, we realised that because of the number of great colleges in Ahmedabad, there are students who love the city, but have to leave due to the lack of tech-related opportunities,” explains Vishal Mehta, MD, Infibeam and an Amdavadi himself. The company started as an ecommerce website in 2007, only to pivot to a B2B company in 2011. Currently, it provides end-to-end website solutions for other businesses, be it Adani Gas or Amul. Mehta, who has worked with Amazon in Seattle in the past, adds, “The lack of opportunities for people (in Ahmedabad) has worked for us, because fewer employees switch jobs, so there is more retention.” Ketan Parekh, founder of EroNKan, believes that most Amdavadi businessmen have no fear of failing. “The software engineering talent in Ahmedabad is fast catching up with other talent-driven metros like Bengaluru and Pune. I am sure there could be a rapid transformation in skills with more training and focussed exposure during industry training,” says the 52-year-old Parekh, a first-generation entrepreneur. The founder of the four-year-old startup is bullish on Ahmedabad’s prospects not just for its quality infrastructure available at low costs or the lower attrition rate when compared to other metros. Says Parekh, “The Industrial Revolution 4.0 is still being adopted slowly across India but companies in Gujarat are more keen to take the first jump and adopt automation on the floor. The geographical proximity to large industries is also a huge benefit.” EroNkan Technologies recently raised an undisclosed amount of Series A investment from venture capital firm GVFL Ltd (formerly Gujarat Venture Finance Ltd). Parekh adds, “The ‘Make in India’ initiative has been a huge boost for us through different startup initiatives and benefits that we are eligible for. Overall, the growth of companies and multinationals in Gujarat, with the different SEZs, has been a tremendous boost for us to showcase our platform.” However, Niraj Hutheesing, founder and director, Cygnet Infotech has a small peeve, “The non-availability of skilled man-power and newer technologies is a major disadvantage. We have to train people as per the current market trends.” The ₹100 crore company provides IT solutions to businesses to automate key business areas. But he doesn’t deny the entrepreneurial zeal of the Amdavadis and attributes much of it to the value system they are brought up in. “The upbringing and the value system that we are brought up in makes an Amdavadi businessman a wealth creator, a wealth preserver and wealth donor. They never look at business as local but always think of scaling up globally.” Infibeam’s Mehta believes it is not only the entrepreneur who is focussed, but also the labour. He narrates an incident that perhaps best embodies the enterprising nature of the Amdavadis. “I have a designer who came to my office for an interview. He told me, ‘Sir hu tamne join karu chu [Sir, I am joining your company].’ So I asked,  ‘Okay. So tell me how much do I pay you.’ And he said, ‘Tame maru kaam juvo, two weeks pachi nakki kariye [Don’t worry about pay. You see my work for two weeks and then tell me how much you want to pay me].’ Would anybody anywhere else say something like that?”