Tata Motors is on a roll. Can anything stop it?

Tata Motors has become the country's second-largest carmaker following a slew of recent launches, and revival of the EV fleet segment 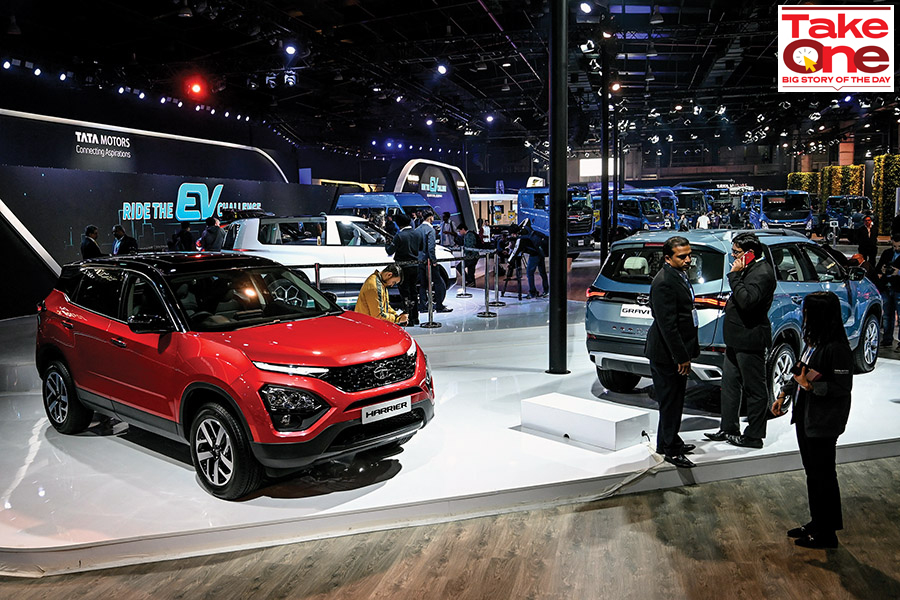 Tata Motors is on a roll. Months after it set up a subsidiary that has become India’s most valuable EV (electric vehicle) company, the automaker has raced past Hyundai Motors to become India’s second-largest carmaker. In December 2021, Tata Motors sold as many as 35,300 units of vehicles, up from 23,545 units a year ago. In contrast, Hyundai sold 32,312 units during the same period.

Between October and December, Tata Motors sold 99,002 units of passenger vehicles (PV), up by almost 45 percent from the year-ago period.

“Tata Motors’ PV business growth journey continued and set several new milestones during the quarter despite witnessing a shortfall in production due to the ongoing semiconductor crisis,” Shailesh Chandra, president of the PV business, said in a statement. “Decade-high quarterly and monthly sales were recorded. In addition, the company also posted calendar year (CY21) sales of 331,178 units, the highest since the inception of the PV business.”

The phenomenal rise to the second-highest automaker comes at a time when Tata Motors has a backlog of some 100,000 vehicles after supplies were affected due to a global shortage of semiconductors. India’s automobile industry is grappling with a shortage of semiconductors, and has a backlog of over 600,000 vehicles for delivery. Semiconductors are critical components that are used in vehicles for numerous features, including navigation, infotainment and traction control, among others.

In October, the company, despite challenges, had also launched the Tata Punch, a small SUV, as it looks to capitalise on the boom in the Indian SUV market.

“Of course, December was an exception,” says Puneet Gupta, director for automotive forecasting at market research firm IHS Markit. “But one thing is clear. You cannot underestimate Tata Motors now. It has been very consistent with its launches, and they have scaled their presence in the fastest growing segments in the industry. Its recent launches have all been successful.”

The Nexon, which launched in 2017, the Harrier in 2019, and the Altroz in January 2020, contribute to over 60 percent of company sales. Of that, Altroz and Harrier were manufactured on the Alfa and Omega platforms, respectively. The two platforms, the first of which was introduced in 2018 on the Harrier and later the Altroz, marked a shift in the company’s practice of developing specific platforms for every model. There is also the company’s hatchback, Tiago—initially named Zica—that has been holding steady in terms of sales, and clocking over 6,000 units a month since the past few years.

“The overwhelming market response to Tata Punch launched in October is further boosting demand for the company’s ‘New Forever’ range of cars and SUVs,” adds Chandra. Tata’s New Forever range has played a significant role in its much-celebrated turnaround as a carmaker, after decades of struggle. The new range of vehicles boasts high safety standards, better engine performance, and driving pleasure, aesthetic design, and rich features, in comparison to some of its previous models.

Meanwhile, in December, the automaker, which currently controls some 75 percent of the Indian EV market, sold 2,255 units of vehicles, up by some 439 percent, compared to the year-ago period. Between October and December, Tata Motors sold 5,592 units of EVs, up by 345 percent. The company is also ramping up its CNG presence, with the launch of a range of CNG vehicles that have found traction in recent times.

“Consequently, EV penetration touched 5.6 percent of PV sales during the quarter versus 1.8 percent in the same period in the last financial year,” says Chandra. “EV sales also touched 10,000 units in 9MFY22 and crossed 2,000 monthly sales landmark for the first time in December (2,255 units). The ever-increasing demand for Nexon EV and Tigor EV, as well as progressive revival of the EV fleet segment were instrumental in driving this steep growth.”

In October, Tata Motors had raised $1 billion from private equity major TPG Rise Climate for its yet-to-be operational EV subsidiary, valuing it at over $9 billion. Tata Motors will invest $2 billion into the subsidiary over the next five years.

The new company, Tata Motors believes, will leverage all the existing investments and capabilities of the parent company, in addition to channelising all the future investments into EVs and dedicated battery vehicle platforms and technologies, among others. Over the next five years, the company will also create a portfolio of 10 EVs while also partnering with Tata Power to create charging infrastructure to help with early adoption.

“We see a very positive outlook for Tata Motors,” says Harshvardhan Sharma, head of auto retail practice at Nomura Research Institute. “At the moment, Tata Motors is being fuelled by tremendous growth by deploying stupendous efforts in electrical mobility segment. As a conglomerate, it is utilising all synergies across its group companies to solve the value chain requirements from battery, charging stations all the way till new tech hardware and software required for EVs. At the same time, with a fresh portfolio of SUV range, it is catering to both ends of the market and successfully navigating its growth.”

“Over the past few years, the messaging from Tata Motors has been very consistent,” adds Gupta. “They are a complete package with focus on quality, value for money, technology and design. Dealers and suppliers have also been rather excited about their comeback. That also means companies such as Hyundai will now have to stretch themselves and focus on ways to take on the Tata might.”

Yet, over the next few months, as the global semiconductor concerns recede, Tata Motors might lose the second spot to Hyundai. “Going forward, semiconductor supplies will remain the key source of uncertainty,” Chandra said in a statement. “Additionally, the impact of the new strain of Covid needs to be closely tracked. We will continue to work on business agility plan and take proactive actions to mitigate these risks.” Meanwhile, it is not just the PV segment in which the company has shown stellar performance. The company’s commercial vehicle segment also posted a 24 percent sales growth in December, with sales at 66,307 units. “Construction and infrastructure spending by central and state governments plus rising activity in sectors such as mining, petroleum-oil-lubricants and allied industries facilitated the demand for M&HCVs,” Girish Wagh, executive director, Tata Motors, said in a statement.

Tweets by @forbesindia
Modern Apps: Necessary For The Post-Pandemic Evolution
Vinay Ravuri, CEO of EdgeQ, on how 5G is creating an inflection point for new semiconductor startups to emerge