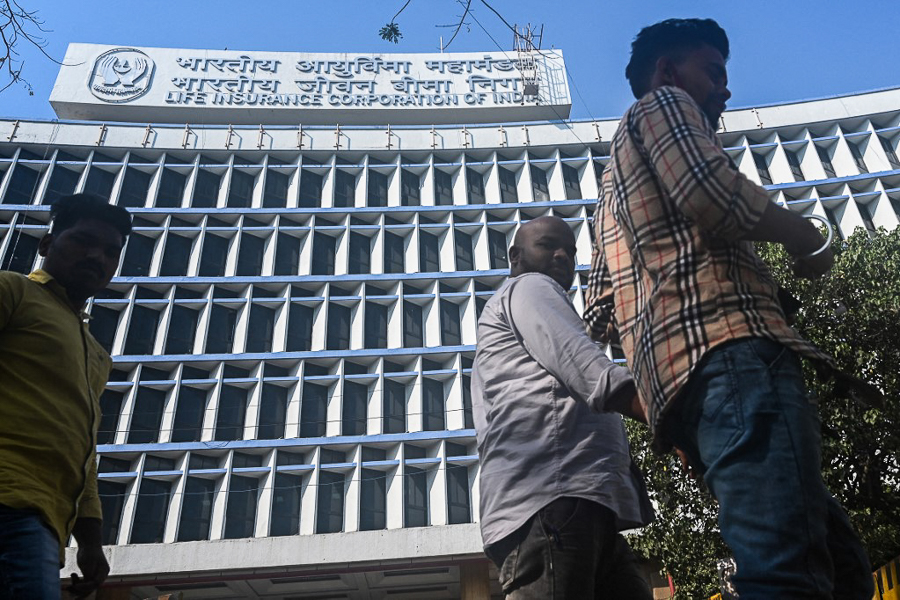 While LIC is the giant amongst insurers, its market share (in terms of new business premium) continues to fall in recent years to 66.2 percent in September 2021 from 69 percent in March 2020. Image: Indranil Mukherjee / AFP

Life Insurance Corporation of India (LIC) – India’s largest insurer and the fifth largest globally – on Monday sought to allay concerns that had emerged around the sudden rise in the embedded value of the insurer, its product mix going ahead and the path it will take to boost profit, once listed.

LIC aims to complete listing at the stock exchanges in the current financial year. The government plans to sell around five percent of its stake in LIC through the public offering. “The plan is to get it done this fiscal,” said Chairman MR Kumar, without disclosing an exact date.

India’s benchmark Sensex index is down about 7.3 percent off its 62,245 points peak in October last year and about 2.5 percent down in 2022, with foreign funds net sellers in Indian stock since October last year.

Companies like Delhivery, One Mobikwik, Sterlite Power and Go Airlines have all got regulatory approval for an initial public offering (IPO) but remain on the sidelines, not keen for a capital raise too close to LIC, which is expected to suck out near $10 billion from the market.

While LIC is the giant amongst insurers, its market share (in terms of new business premium) continues to fall in recent years to 66.2 percent in September 2021 from 69 percent in March 2020. On another key matrix, the pace of growth for LIC’s total premium is much lower than that of the private sector. From FY16 to FY21, LIC’s total premium increased at a 9 percent compound annual growth rate (CAGR) for the period, compared to 18 percent for private sector insurers for the same period.

LIC’s embedded value – the total of the net asset value and present value of future profits of a life insurance company – has been calculated at Rs5,39,686 crore as of September 31, 2021, compared to just Rs95,605 crore as of March 31, 2021. The six-fold jump was due to the shareholder’s interest in LIC’s non-par funds increasing to 100 percent, after the LIC Act was amended last year to allocate the entire surplus from non-participatory funds to shareholders.

“By 2024-25, we will be aligned in practice with all private sector insurance companies,” LIC’s chief actuary KR Ashok told the media.

The fear is that LIC’s business, particularly through bancassurance, could get hit hard once LIC and the government decide to sell their stake in IDBI Bank, as part of the ongoing disinvestment programme. Bancassurance is the selling of life assurance and other insurance products by banks. Kumar clarified today that "Going forward, we would like to have some stake in IDBI Bank. The whole idea of picking up a stake in the bank was strategic. It has not gone away at all.” He did not disclose how much stake LIC would prefer to retain in IDBI Bank.

Kumar said to become more competitive “they might have different bancassurance products, like other insurance companies”. LIC currently has 72 banking partners through which it sells its policies. But it will need to tie up with several more banks to increase its profitability and product mix. LIC has a 49.2 percent stake in IDBI Bank and the government a 45.47 percent stake in the bank, as of December 31, 2021.

The LIC DRHP says the insurer will have up to 31.62 crore shares on offer through an offer for sale, which would represent five percent of equity through the IPO.

Kumar was confident that LIC would be embarking on its “3.0” version with the listing of the IPO, with a new list of shareholders. “We will need to be agile, nimble and transparent. It will be an exciting story ahead.”