What's at stake for the global economy if Russia invades Ukraine

An outright attack by Russian troops could cause dizzying spikes in energy and food prices, fuel inflation fears and spook investors, a combination that threatens investment and growth in economies around the world

By Patricia Cohen and Jack Ewing 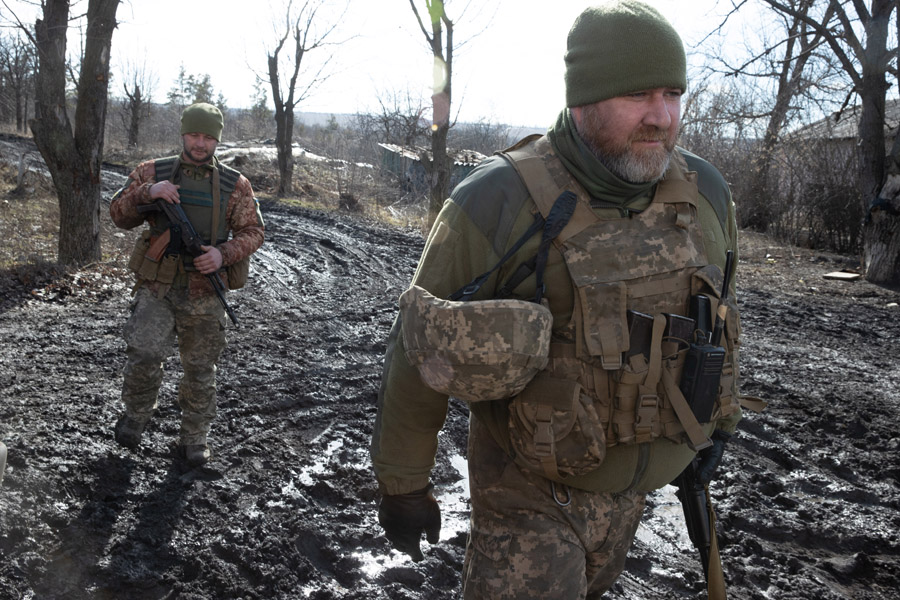 Ukrainian soldiers in Krymske where mortar attacks from Russian-backed separatists fell through the night, Feb. 19, 2022. President Vladimir Putin of Russia may be looking for fissures in the Western alliance reaction to an invasion into Ukraine, which so far has been united against him. (Tyler Hicks/The New York Times)

After getting battered by the pandemic, supply chain chokeholds and leaps in prices, the global economy is poised to be sent on yet another unpredictable course by an armed clash on Europe’s border.

Even before the Kremlin ordered Russian troops into separatist territories of Ukraine on Monday, the tension had taken a toll. The promise of punishing sanctions in return by President Joe Biden and the potential for Russian retaliation had already pushed down stock returns and driven up gas prices.

An outright attack by Russian troops could cause dizzying spikes in energy and food prices, fuel inflation fears and spook investors, a combination that threatens investment and growth in economies around the world.

However harsh the effects, the immediate impact will be nowhere near as devastating as the sudden economic shutdowns first caused by the coronavirus in 2020. Russia is a transcontinental behemoth with 146 million people and a huge nuclear arsenal, as well as a key supplier of the oil, gas and raw materials that keep the world’s factories running. But unlike China, which is a manufacturing powerhouse and intimately woven into intricate supply chains, Russia is a minor player in the global economy.

Italy, with half the people and fewer natural resources, has an economy that is twice the size. Poland exports more goods to the European Union than Russia.

“Russia is incredibly unimportant in the global economy except for oil and gas,” said Jason Furman, a Harvard economist who was an adviser to President Barack Obama. “It’s basically a big gas station.”

Of course, a closed gas station can be crippling for those who depend on it. The result is that any economic damage will be unevenly spread, intense in some countries and industries and unnoticed in others.

Europe gets nearly 40% of its natural gas and 25% of its oil from Russia, and is likely to be walloped with spikes in heating and gas bills, which are already soaring. Natural gas reserves are at less than one-third of capacity, with weeks of cold weather ahead, and European leaders have already accused Russia’s president, Vladimir Putin, of reducing supplies to gain a political edge.

And then there are food prices, which have climbed to their highest level in more than a decade largely because of the pandemic’s supply chain mess, according to a recent United Nations report. Russia is the world’s largest supplier of wheat, and with Ukraine, accounts for nearly one-quarter of total global exports. For some countries, the dependence is much greater. That flow of grain makes up more than 70% of Egypt and Turkey’s total wheat imports.

This will put further strain on Turkey, which is already in the middle of an economic crisis and struggling with inflation that is running close to 50%, with skyrocketing food, fuel and electricity prices.

On Monday, the White House responded to Putin’s decision to recognize the independence of two Russian-backed territories in the country’s east by saying it would begin imposing limited sanctions on the so-called Donetsk and Luhansk People’s Republics. Jen Psaki, the White House press secretary, said Biden would soon issue an executive order prohibiting investment, trade and financing with people in those regions.

Analysts watching the unfolding conflict have mapped out a range of scenarios from mild to severe. The fallout on working-class families and Wall Street traders depends on how an invasion plays out: whether Russian troops stay near the border or attack the Ukrainian capital, Kyiv; whether the fighting lasts for days or months; what kind of Western sanctions are imposed; and whether Putin responds by withholding critical gas supplies from Europe or launching insidious cyberattacks.

“Think about it rolling out in stages,” said Julia Friedlander, director of the economic statecraft initiative at the Atlantic Council. “This is likely to play out as a slow motion drama.”

As became clear from the pandemic, minor interruptions in one region can generate major disruptions far away. Isolated shortages and price surges — whether of gas, wheat, aluminum or nickel — can snowball in a world still struggling to recover from the pandemic.

“You have to look at the backdrop against which this is coming,” said Gregory Daco, chief economist for EY-Parthenon. “There is high inflation, strained supply chains and uncertainty about what central banks are going to do and how insistent price rises are.”

The additional stresses may be relatively small in isolation, but they are piling on economies that are still recovering from the economic body blows inflicted by the pandemic.

That means an invasion could have a dual effect — slowing economic activity and raising prices.

In the United States, the Federal Reserve is already confronting the highest inflation in 40 years, at 7.5% in January, and is expected to start raising interest rates next month. Higher energy prices set off by a conflict in Europe may be transitory but they could feed worries about a wage-price spiral.

“We could see a new burst of inflation,” said Christopher Miller, a visiting fellow at the American Enterprise Institute and an assistant professor at Tufts University.

Also fueling inflation fears are possible shortages of essential metals like palladium, aluminum and nickel, creating another disruption to global supply chains already suffering from the pandemic, trucker blockades in Canada and shortages of semiconductors.

The price of palladium, for example, used in automotive exhaust systems, mobile phones and even dental fillings, has soared in recent weeks because of fears that Russia, the world’s largest exporter of the metal, could be cut off from global markets. The price of nickel, used to make steel and electric car batteries, has also been jumping.

It’s too early to gauge the precise impact of an armed conflict, said Lars Stenqvist, chief technology officer of Volvo, the Swedish truck maker. But he added, “It is a very, very serious thing.”

Depending on what happens, the most significant effects on the global economy may manifest themselves only over the long run.

One result would be to push Russia to have closer economic ties to China. The two nations recently negotiated a 30-year contract for Russia to supply gas to China through a new pipeline.

The crisis is also contributing to a reassessment of the global economy’s structure and concerns about self-sufficiency. The pandemic has already highlighted the downsides of far-flung supply chains that rely on lean production.

Now Europe’s dependence on Russian gas is spurring discussions about expanding energy sources, which could further sideline Russia’s presence in the global economy.

“In the longer term, it’s going to push Europe to diversify,” said Jeffrey Schott, a senior fellow working on international trade policy at the Peterson Institute for International Economics. As for Russia, the real cost “would be corrosive over time and really making it much more difficult to do business with Russian entities and deterring investment.”

Tweets by @forbesindia
LIC tries to allay valuation, profitability concerns prior to IPO launch
India to set up a 'data office'; Eka Software in talks to be acquired; AI can't copyright its own art