International condemnation would follow, although Putin may be betting that it would not last long, and that the world would gradually get accustomed to a new, larger Russia reconstituting the sphere of influence that was once the hallmark of the old Soviet Union 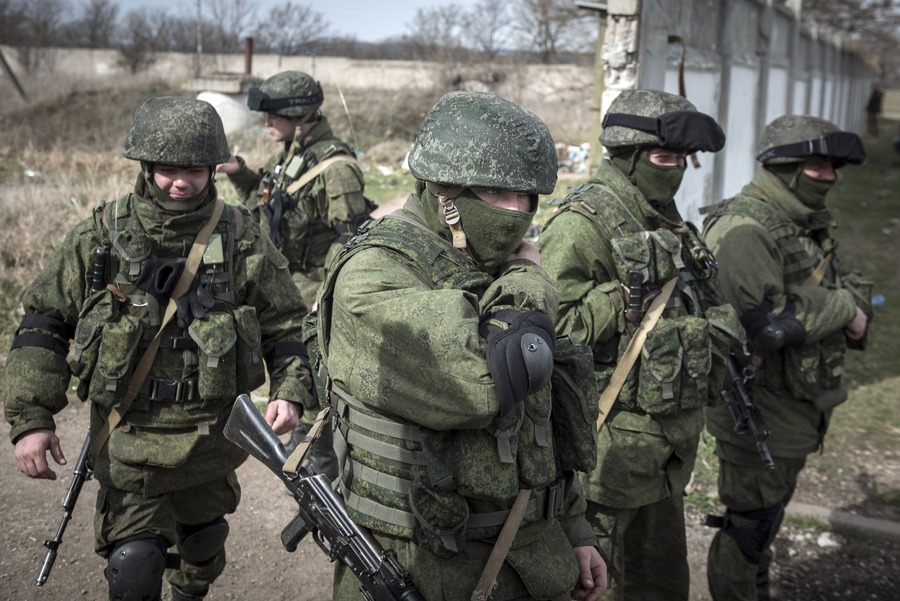 Russian soldiers with no insignia on their uniforms Perevalne, in the Crimea region of Ukraine, on March 6, 2014. After the uprising in 2014, Russian troops wearing unmarked uniforms invaded Crimea, a strategically important peninsula on the Black Sea. (Sergey Ponomarev/The New York Times)


MUNICH — When President Joe Biden declared Friday he was convinced President Vladimir Putin of Russia had decided to attack Ukraine “in the coming week, in the coming days,” the skeptics among American allies suddenly fell quiet. Hours before, Biden had informed them that U.S. intelligence agencies had just learned that the Kremlin had given the order for Russian military units to proceed with an invasion.

Now the debate has shifted to how Putin will do it: in one massive nationwide attack; a series of bites that dismantle the country, piece by piece; or a pythonlike squeeze. That last option is made all the easier with the news Sunday morning that Belarus is allowing Russian troops to remain indefinitely, where they can menace Kyiv, the Ukrainian capital. Putin might be betting that he can shatter Ukraine’s economy and oust its government without having to immediately roll in tanks.

Putin’s strategic choices over the next few weeks may make a huge difference in how the world reacts.

If he strikes to take the whole country in a single blow — the approach that senior U.S. military and intelligence officials and many outside analysts now think is the most likely — it could provoke the largest, most violent battle for European territory since the Nazi surrender in 1945.

There is little question that the full package of sanctions and technology export cutoffs would be invoked almost immediately. International condemnation would follow, although Putin may be betting that it would not last long, and that the world would gradually get accustomed to a new, larger Russia reconstituting the sphere of influence that was once the hallmark of the old Soviet Union.

“Everything leading up to the actual invasion appears to be taking place,’’ Secretary of State Antony Blinken said Sunday on CNN’s “State of the Union.” “All of these false-flag operations, all these provocations to create justifications — all that is already in train.”

Yet Blinken held open the possibility of a last-minute diplomatic solution, something President Emmanuel Macron of France tried to get underway Sunday in a phone call with Putin that lasted one hour, 45 minutes. The French president said a series of meetings would start Monday to try to impose a cease-fire in the Donbas, a Russian-speaking region of eastern Ukraine where women and children were being evacuated after local separatists claimed, falsely, that the Ukrainian government was about to attack them. (The West says such claims are an effort to create a pretext for a Russian invasion.)

Blinken is currently scheduled to meet Sergey V. Lavrov, the foreign minister, in Europe — but has made clear that the session will be scrapped if Russia begins an attack.

“We believe President Putin has made the decision,” Blinken said Sunday, “but until the tanks are actually rolling and the planes are flying, we will use every opportunity and every minute we have to see if diplomacy can still dissuade President Putin from carrying this forward.”

The White House released a statement Sunday night that Biden had accepted “in principle” a summit with Putin after the meeting between Blinken and Lavrov, again specifying that it would only take place in the absence of an invasion.

The information passed to Biden from the intelligence agencies left unclear whether Putin’s orders would lead to a massive invasion or a more gradual approach that would give the Russian leader more opportunities to exploit fissures just beneath the surface in the Western alliance arrayed against him. He could, for example, test the proposition that Germany or Italy, the two Western European countries most dependent on Russian-provided gas, might falter in their resolve.

Those were the scenarios being discussed most intensely this weekend at the Munich Security Conference, the annual meeting of government ministers, corporate leaders and strategists, where attendees gamed out Putin’s choices.

“If he is intent on escalating, I don’t think it’s a sudden blitzkrieg to Kyiv and the ouster of the Zelenskyy government,’’ said Ian Bremmer, president of the Eurasia Group, a geopolitical consulting firm. “It’s much more likely to look like a recognition of the independence of the breakaway territory” around Luhansk, in the east.

“You hope, if you are Putin, that leads to more skittishness of some of the NATO allies, less alignment with NATO, more opportunities for Russia to get what it wants without having to go full-scale into Ukraine,” Bremmer said.

A few weeks ago, some U.S. officials shared that sentiment. Putin, they noted Biden briefly floated the phrase “minor incursion” in January, at a news conference. At the time, he suggested that the allies might not impose full sanctions for a modest expansion of the territory Russia already controls around Crimea.

In that case, Putin might seek to test the international reaction to each step — seeing what kind of punishment, or military resistance, he might face. But almost as soon as the words were out of Biden’s mouth, White House officials walked them back. The next day, the president declared that any move over the border — no matter how minor — would trigger the full sanctions package.

Still, officials in the Biden administration are discussing with some urgency how the United States might respond to a series of smaller, or less visible, steps by Russia.

Russia could also cripple the Ukrainian power grid and communications systems. Biden recently sent the deputy national security adviser for cyber- and emerging technologies, Anne Neuberger, to brief NATO on what that might look like — and for the possibility that the cyberattacks could spread to Western Europe and the United States.

Another “minor incursion” might be paramilitary activity, or a prelude to a traditional invasion reminiscent of the Soviet Union’s invasion of Hungary in 1956 or Czechoslovakia in 1968. But over the past two weeks, administration officials have publicly shifted their assessment, saying they think Putin is likely to go big.

About three weeks ago, U.S. intelligence officials picked up more and more evidence that the primary target was Kyiv, a prediction supported by the massing of new troops on the Belarus-Ukraine border, a mere 100 miles or so from the Ukrainian capital.

Whether those troops would just menace the capital from afar, raining rocket attacks on it, or whether the Russian plan is to ring the capital city with troops but not enter it, to avoid urban warfare, is unclear.

But in briefings to members of Congress and others, the Pentagon and U.S. intelligence officials have described a worst-case scenario that they now consider to be likely: a week or two of terror, constant rocket attacks and street fighting and, ultimately, a hunt for anyone who supported the democratically elected government of President Volodymyr Zelenskyy.