These 10 charts explain how Russia-Ukraine conflict will impact India 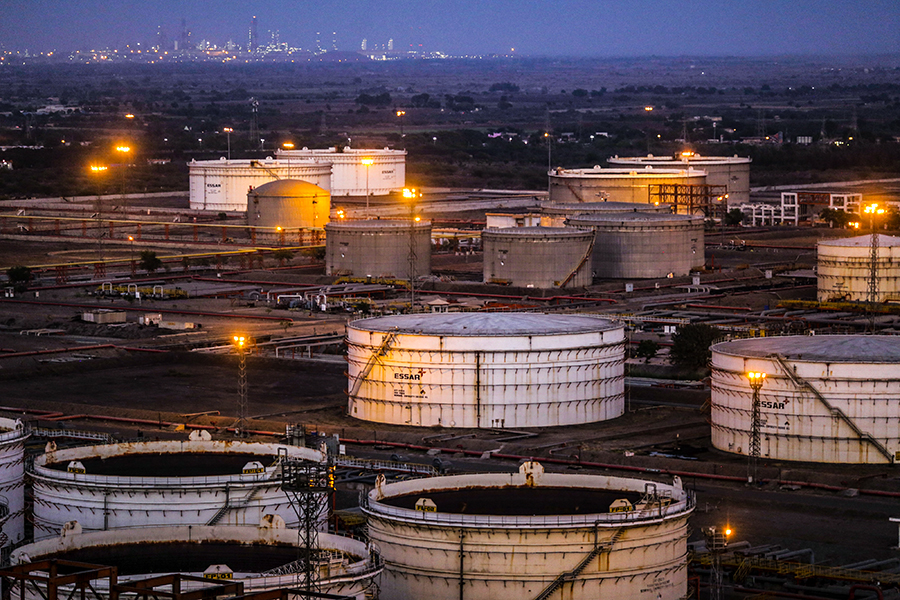 The global economy on Thursday moved into unchartered territory after Russian President Vladimir Putin announced a military operation, as Russian troops and tanks stormed into Ukraine, targeting military installations and airfields. The move to attack Ukraine resulted in oil prices breaching $100 per barrel (see chart) and sent global stocks tumbling by between 2 percent and 3 percent across Asia. 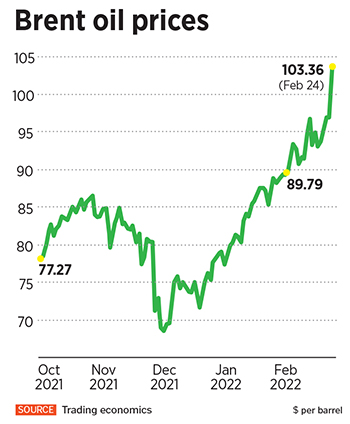 Russia is the world’s second largest oil exporter in the world after Saudi Arabia, selling crude to European refineries. Commodity prices are also likely to witness a resurgence in prices due to supply uncertainties from Russia and Ukraine. 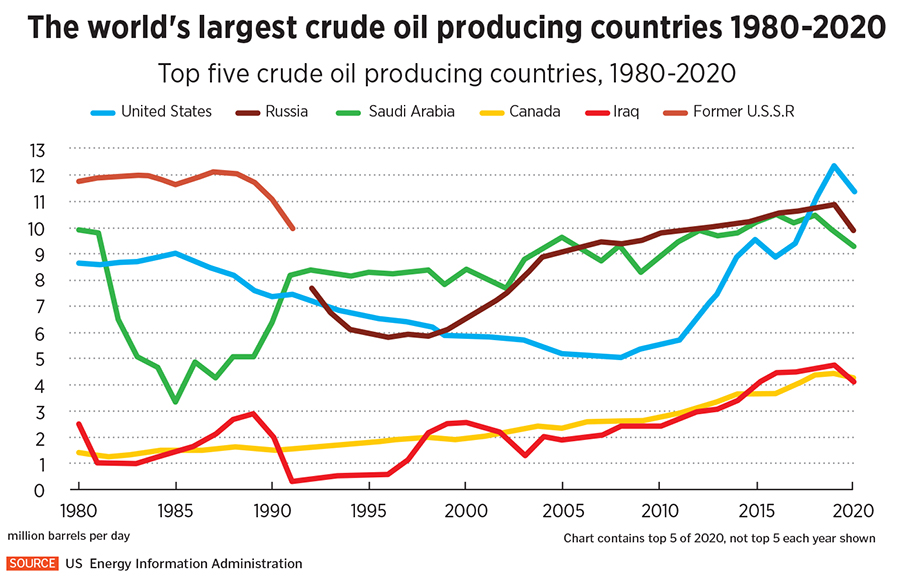 For India, it’s a rude speed bump which it did not see coming, as it was on a path of a steady pace of growth, with business activity and consumer confidence picking up in February with the weakening of new cases of the Omicron Covid-19 variant.

India, like most large economies of China, United States and Japan, imports its oil needs, estimated at around 85 percent of its demand. A surge in oil prices—which have jumped 45 percent in the past 10 weeks—hurts ‘import’ inflation. It will also escalate the resurgence of most commodity prices on fears of disruption in supplies or due to any economic sanctions imposed on Russia. 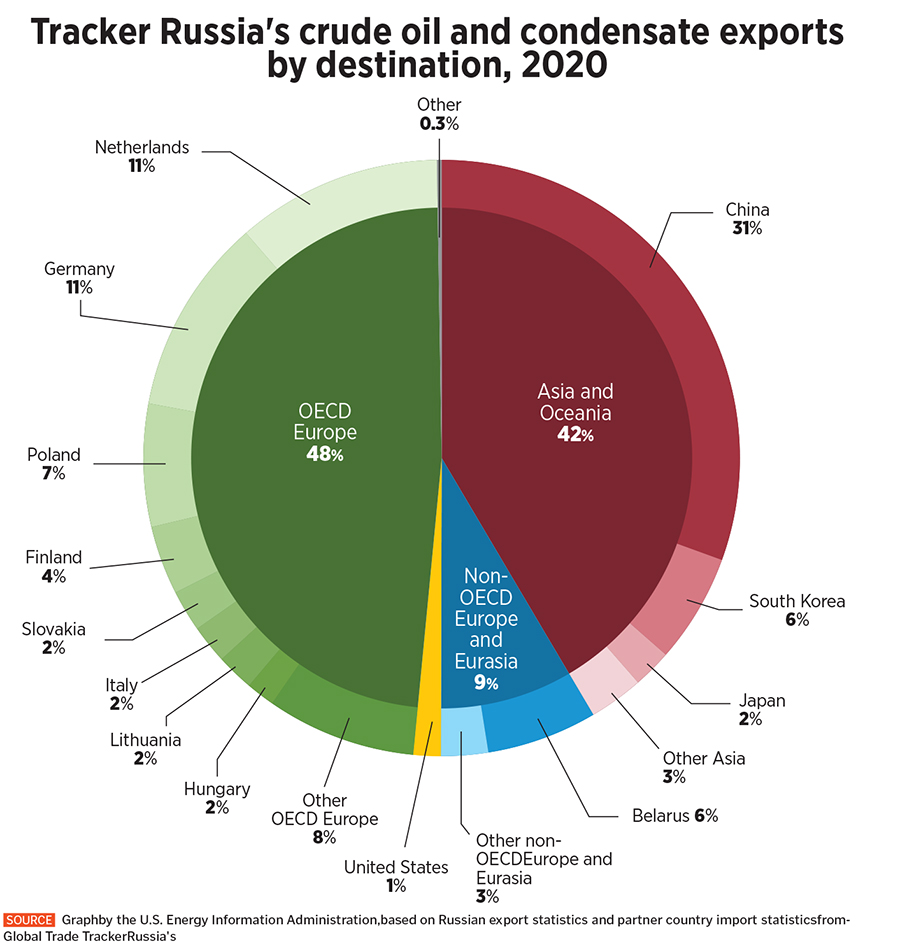 The rise in oil prices will increase India’s expenditure, thus impacting the fiscal deficit target which the government has pegged at 6.4 percent for FY23.

Every $1 per barrel increase in crude leads to a 60-70 paise per litre increase in retail fuel prices in India. The government cut excise duties on diesel by Rs10 and Rs5 on petrol in November, and then lowered VAT on petrol in Delhi to 19.4 percent from an earlier 30 percent. Now there is a real possibility that the government will raise fuel prices once the upcoming state elections are over. 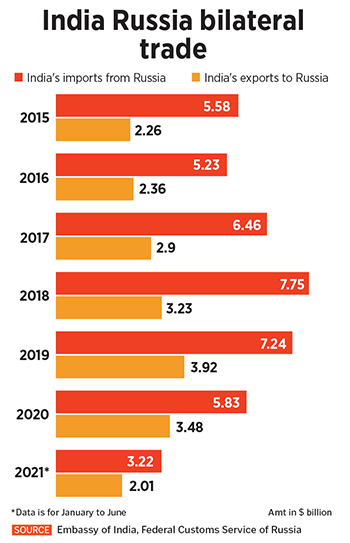 "With the impending increase in the oil well, you can assume that there will be some pass through after some of the state elections. At the current price levels, the increase will reverse the tax cuts announced. They will not push prices dramatically high," says Rahul Bajoria, chief India economist at Barclays.

"What could be a worry for India is if oil prices sustain at high levels at above $100 for over a 1-2 year period," he adds. The Reserve Bank of India (RBI) has pegged India’s inflation at 4.5 percent in its monetary policy meeting in February. 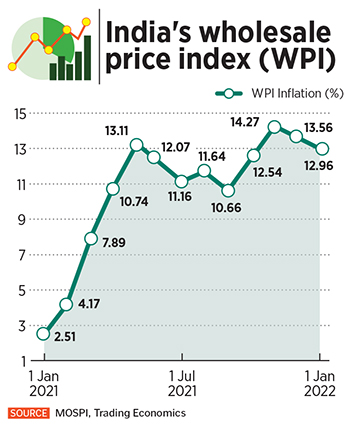 According to ICICI Securities chief economist Prasenjit K Basu, higher crude oil prices will keep India’s inflation high, “obliging the RBI to raise rates more than the two hikes we expected—in August-December 2022”. India will also be impacted via the trade route, given that the European Union (EU) is the biggest market for the country’s exports. “Supply disruptions to the EU are also likely to generate greater demand for steel and engineering, of which India is an alternative supplier.”

While the impact on India’s economy will be seen in the form of a rise in prices of oil, minerals and metals, the country will also be impacted in trade and education sectors with Ukraine. According to data from UN Comtrade, India was the 15th largest export and second largest import market of pharmaceutical products for Ukraine. Ukraine imported $158.1 million of pharmaceuticals from India in 2020, which is followed by electricals and electronic equipment at $32.5 million and plastics at $20.7 million. India’s Ranbaxy, Sun Pharma and Dr Reddy’s Laboratories have representative offices in Ukraine.

India and Ukraine have strong education links, with about 18,000 Indian students studying medicine and engineering in the country. Calling the situation “highly uncertain”, the Indian embassy has in an advisory on Thursday urged Indian students to “maintain calm and remain safe” wherever they are, whether it is homes, hostels, accommodations or transit. 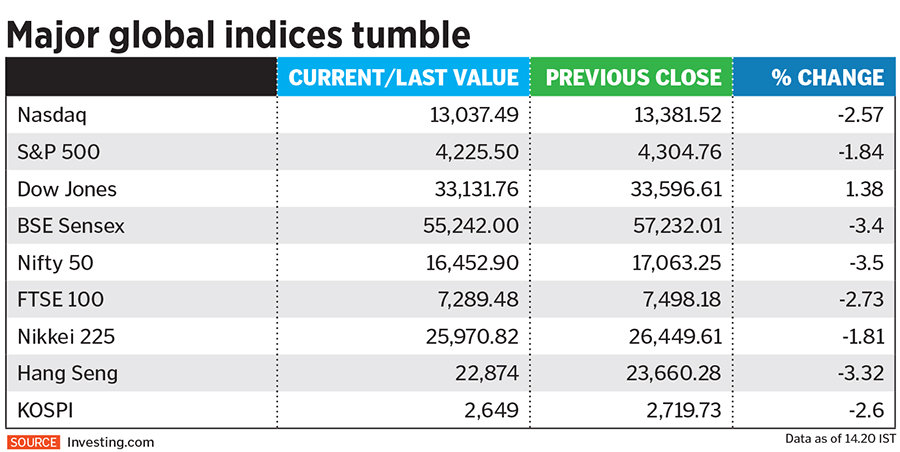 India’s stock markets have shed nearly 11 percent from its October 19, 2021, peak of 62,245.43 for the benchmark 30-share Sensex. Besides the concerns of global central banks easing liquidity measures in 2022 and the US Federal Reserve’s impending interest rate hikes, Indian markets have fallen due to sustained foreign funds sell off in Indian stocks since last October. 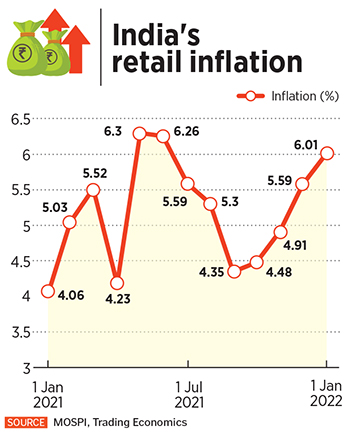 This alongside rising inflation concerns (see chart) has meant that India is back on the rocky path, at least for the near term. Most economists and analysts continue to maintain India’s GDP forecast between 7.8 percent and 9 percent for FY23. 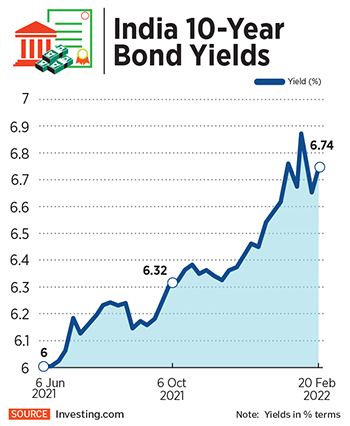 The pressure, as during several corrections and uncertainties, will be for the new investors who entered the markets during the record highs of 2021. Their risk-taking appetite in the current state of uncertainty is likely to remain weak.