RBI turns hawkish to sail ahead of the 'storm'

RBI Monetary Policy Committee hikes the repo rate by 50 bps to 4.9 percent to tame inflation which it forecasts at 6.7 percent versus earlier projection of 5.7 percent for FY23 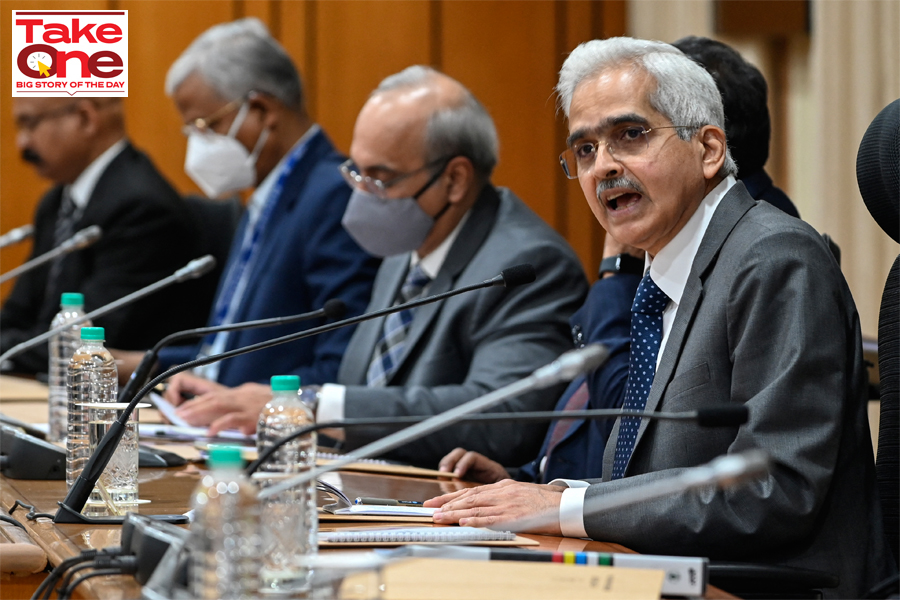 The six-member rate-setting panel has cautioned that inflation is likely to remain above the upper tolerance band of 6 per cent until December. Image: Indranil Mukherjee / AFP

In his concluding remarks, quoting Mahatma Gandhi once again, Reserve Bank Governor Shaktikanta Das alluded to how the central bank needs to ‘make the boldest effort to sail full steam ahead’ to ‘overtake the storm that is about to burst’. Is the ‘storm’ a metaphor for stagflation? Or an economic recession?

But certainly, the main headwind is the relentless surge in food, energy, and commodity prices. “The war has led to globalisation of inflation,” Das said on June 8. “The war in Europe is lingering and we are facing newer challenges each passing day.”

In this turbulent backdrop, in its June policy meet, the Reserve Bank’s Monetary Policy Committee unanimously voted to hike the repo rate by 50 basis points to 4.9 percent as it focussed on withdrawal of accommodation. The cash reserve ratio at 4.5 percent was not raised. Although the RBI did not alter its GDP forecast of 7.2 percent, it sharply revised its inflation forecast to 6.7 percent from 5.7 percent for the current fiscal year.

The six-member rate-setting panel has cautioned that inflation is likely to remain above the upper tolerance band of 6 percent until December.

“The upside risks to inflation as highlighted in the April and May 2022 policies have materialised earlier than anticipated—both in terms of timing and magnitude. Inflationary pressures have become broadbased and remain largely driven by adverse supply shocks. There are growing signs of a higher pass-through of input costs to selling prices,” Das further said. 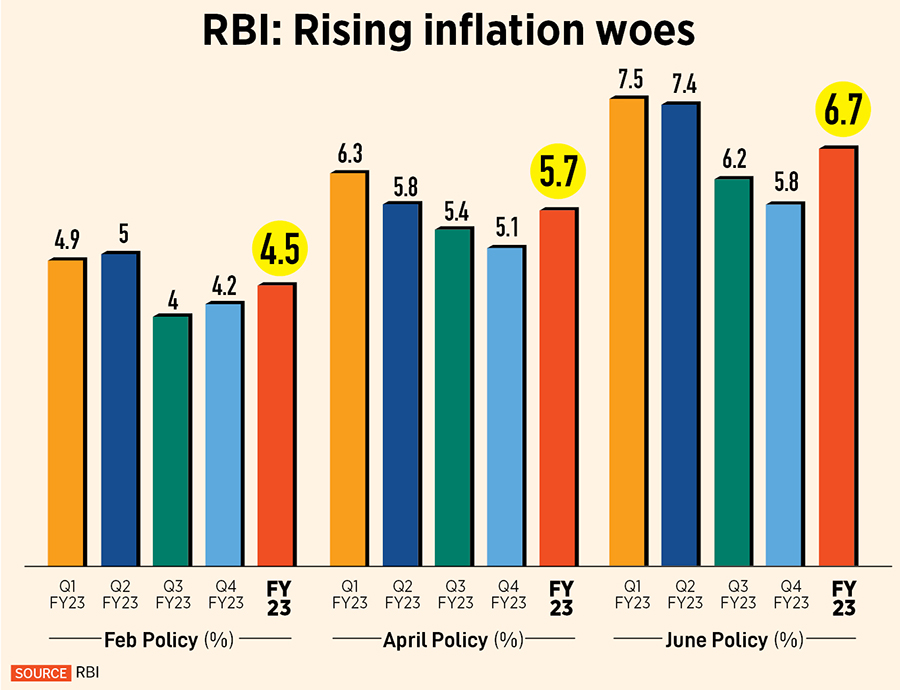 The central bank, after a long and arguably delayed response, is gearing up to fire multiple rounds to shoot inflation: In April, the rate-setting panel voted to keep the repo rate unchanged at a historic low of 4 percent, but retail inflation at an eight-year high of 7.79 percent jolted the RBI to hike the repo rate by 40 basis points in an unscheduled monetary policy meeting in the first week of May. Markets are bracing for a cumulative rate hike to the tune of 150 basis points this fiscal year.

“Today’s hike by 50 basis points on the top of an inter-meeting 40 basis points hike in May is reflective of inflation elbowing its way to the top of the RBI’s priority list and it belatedly looking to catch up with the curve. We believe we are still far from the finishing line and that more frontloaded rate hikes are on the offing,” says Aurodeep Nandi, economist, Nomura.

Bond markets have been edgy. The ten-year bond yield scaled a three-year high of 7.5 percent in the run-up to the June meeting. Yet the governor’s assurance of calibrated rate hikes worked as a balm to soothe frayed nerves of investors.

“The RBI will ensure availability of adequate liquidity to meet the productive requirements of the economy. The Reserve Bank will also remain focussed on orderly completion of the government’s borrowing programme,” Das said.

On Wednesday, after the outcome of the June monetary policy meeting was announced, bond yields cooled down by around 7 basis points.

“The comment on the orderly completion of the government borrowing programme served to cool the 10-year G-sec yield. We foresee further repo hikes, however, the rise in the yields will now be somewhat shallower than our earlier expectations," says Aditi Nayar, chief economist, ICRA. 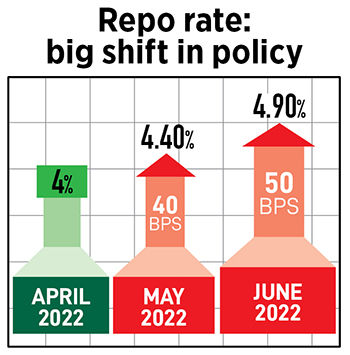 The RBI’s laser-sharp focus on taming inflation has translated into an urgency to turn the tap off easy liquidity. In the last two months, the central bank has raised the effective overnight rate by 130 basis points.

Supply chain disruptions have pushed up inflation levels to decadal highs in most countries, forcing global central banks to take action by tightening monetary policies. Emerging economies are bearing the brunt of the policy shifts in advanced economies.

High input costs, tepid consumption, and weak economic activity have slammed the brakes on GDP growth in India. “We have already reprioritised our policies to control inflation, without losing sight of the growth requirements,” Das said. 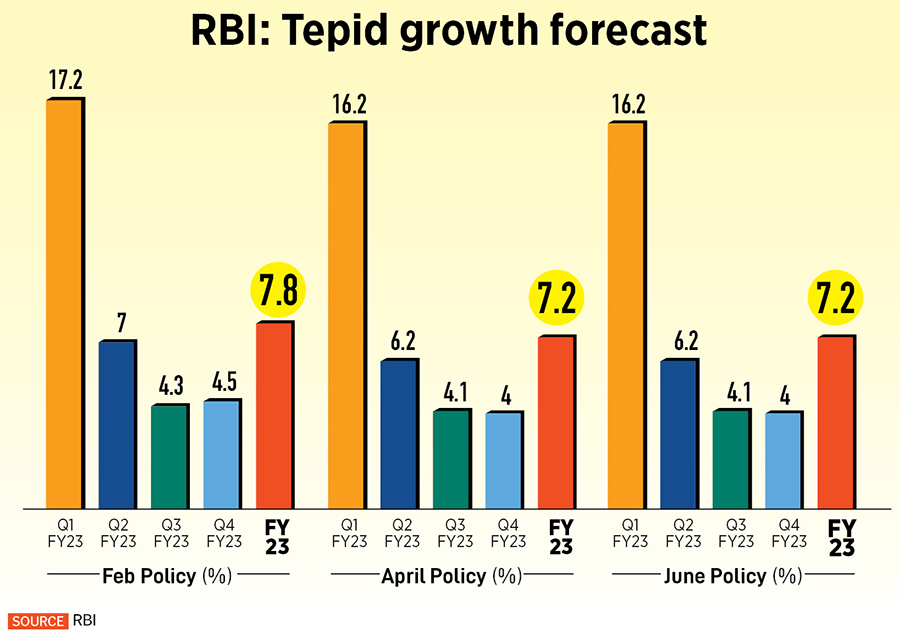 But economists and industry leaders are sceptical. “Our fear is that growth could see a serious deceleration in the second half of FY23 and FY24 on the back of such steep tightening and structural constraints,” says Nikhil Gupta, chief economist at Motilal Oswal.

Since the rate hike in May, banks have increased interest rate on home loans by 30-40 basis points. As interest rates inch up further, rate-sensitive sectors are in a tough spot. For example, realty players are concerned home loans will turn dearer and stamp out signs of revival in the debt laden sector.

As interest rates climb, borrowers feel the pinch. Lending rates are going up, as pricing of most loans is linked to benchmark rates. However, depositors aren’t earning higher returns yet. The interest rate on fixed deposits ticks up with a lag of a couple of months. Nonetheless, rampant inflation stands to cap real returns.

This brings up the question: When will interest rates peak?

The tone of the monetary policy marks a clear departure from the central bank’s earlier pro-growth statements of doing whatever it takes to support durable recovery in the economy. However, amid global volatility and widespread uncertainty, the RBI governor chose to steer clear of forward guidance.

Instead, Das said, “Monitoring and assessing inflation pressures and balancing risks to growth will be crucial for judging the appropriate policy path as we move ahead.”