Rate hike: Not a question of 'if' but 'how much'

Amid surging inflation and global volatility, the Reserve Bank's rate setting panel will begin its bi-monthly monetary policy deliberations on June 6 and is widely expected to hike rates as it renews its focus on inflation control over growth 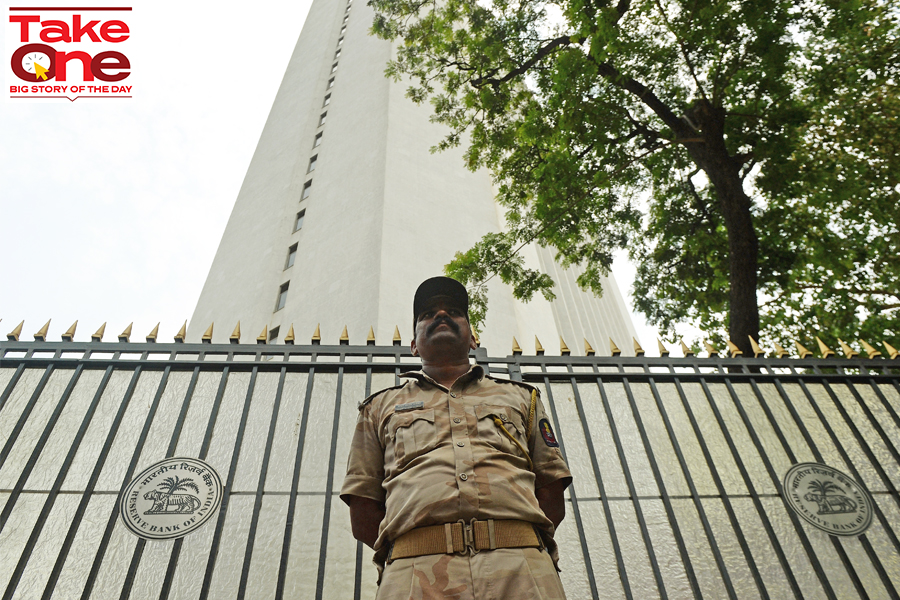 An ultra-accommodative monetary policy was crucial to cushion the severe impact of the unprecedented coronavirus pandemic. Nonetheless, like most global central banks, the RBI has been slow in its withdrawal of liquidity Image: Punit Paranjpe

The Reserve Bank’s Monetary Policy Committee (MPC) will meet next week to mull interest rates and unveil the bi-monthly credit policy on June 8. The rate-setting panel huddled in an off-cycle meeting last month to take steps to tackle rapid inflation with a hike of 40 basis points in the benchmark repo rate while remaining accommodative.

Ahead of the meeting on Monday, the chatter in business circles is not whether or not there will be an increase in interest rates. Rather, the question on everyone’s lips is if the repo rate will be raised by 35 bps, 40 bps, or 50 bps. After all, in the words of RBI Governor Shaktikanta Das, the expectation of a rate hike is a no-brainer.

Financial markets have pencilled in a rate hike of up to 50 basis points next week. A Reuters poll, done between May 26 and June 1, suggests that the central bank is likely to raise the repo rate by at least a 100 basis points over the next four MPC meetings. A majority of the respondents polled predicted the repo rate was likely to inch up to at least its pre-pandemic level of 5.15 percent next quarter. Many of the poll participants see the repo rate perched at 5.5 percent at the end of the year.

Pankaj Pathak, fund manager-fixed income, Quantum AMC, expects a repo rate hike of 35-40 basis points next week. However, on the back of the Centre’s recent announcement of fuel tax cuts and reduction of import duties on edible oils, Pathak says, “We will not be surprised if they prefer to go slow on rate hikes since the government is also responding to inflation risks.”

Furthermore, Pathak says the RBI may not tweak the CRR rate in the next meeting. “Surplus liquidity in the banking system has fallen sharply in the last three weeks. Currently, the net excess liquidity parked under the RBI’s liquidity adjustment facility (LAF) window is close to Rs 3 lakh crore. We believe the RBI will be comfortable with this level of liquidity at this juncture,” he explains. 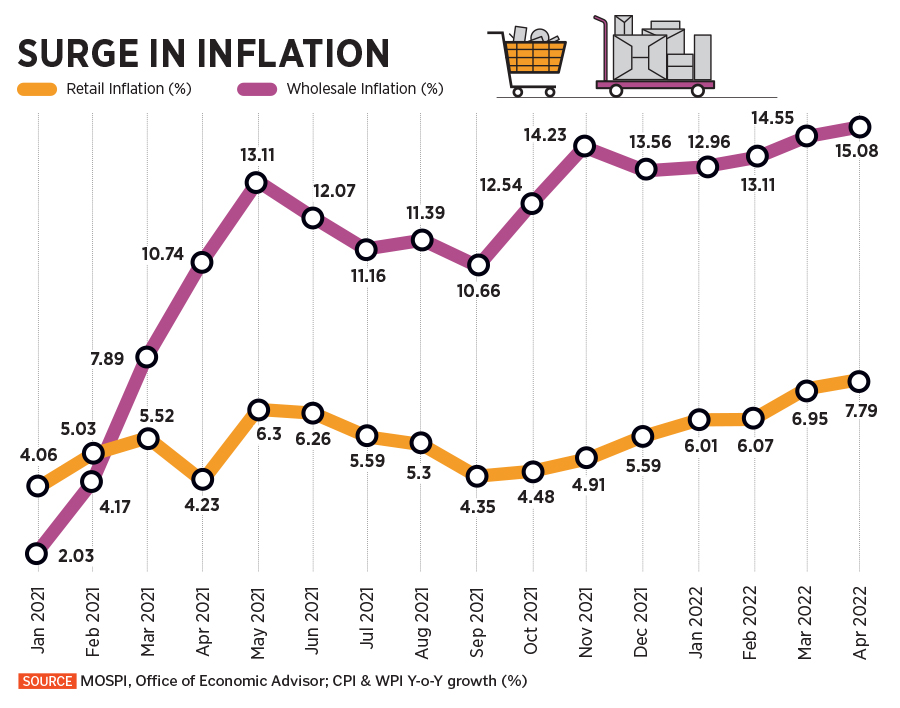 Foreign brokerage firm Nomura predicts the repo rate will touch 6.25 percent by April 2023. It expects a repo rate hike of 50 basis points in June, 35 basis points in August, followed by 25 basis points rate hike in the next four MPC meetings between October and April 2023, as the RBI has little choice but to focus on inflation rather than prioritising growth.

“We believe inflation is likely to remain elevated at 7.2 percent year-on-year in FY23 due to elevated global commodity prices,” says Nomura’s chief India economist Sonal Varma. “Firms are already under (price) pressures. Owing to (higher) costs being passed on to consumers, even if partially, there could be a hit to consumption demand,” Varma adds.

Economists believe the recent fiscal measures announced by the government—a central excise duty cut of Rs 8 per litre on petrol and Rs 6 per litre on diesel along with several curbs on exports and imports--may not be enough to cool inflation in the face of persistent increase in input prices and pass-through risks.

“While these measures may help soften inflationary pressures by about 50bps over the coming months, we think they will not be enough to bring inflation within the RBI comfort zone [4 +/-2 percent] unless global commodity prices moderate significantly. We maintain our base case expectation that CPI inflation will average 6.5-7 percent in FY23,” says Tanvee Gupta Jain, chief India economist, UBS.

In its April meeting, the central bank had forecast FY23 GDP growth at 7.2 percent and inflation at 5.7 percent (see table). 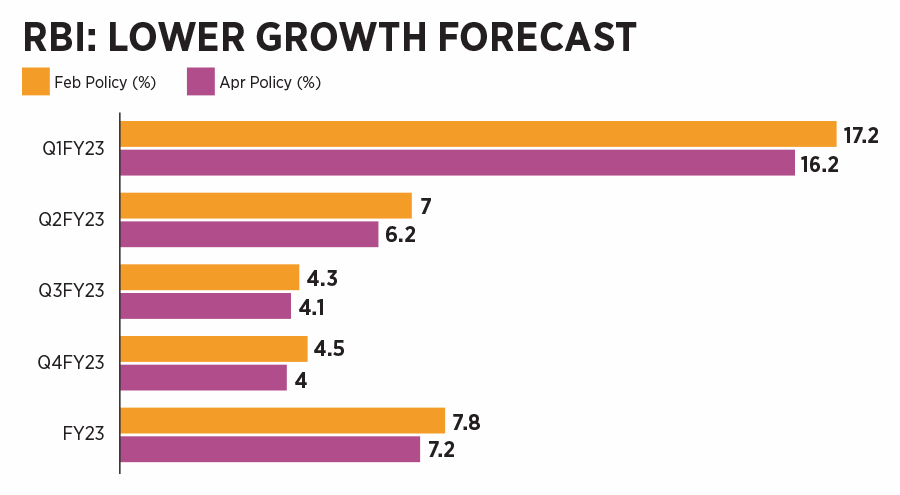 Despite growth risks, most analysts and economists see GDP growth at around a 7 percent level in the current fiscal year and do not expect the MPC to trim its forecast. But several brokerages and rating agencies have materially raised their inflation forecast to around 7 percent, and given the risks to inflation, they say the MPC is likely to revise its inflation forecast upwards next week.

On May 4, the central bank hurriedly, without warning, hiked the repo rate--the first since August 2018--to 4.4 percent from a historic low of 4 percent, in an emergency meeting. The intent, it said, was to soften a much stronger action in June. The rapid surge in inflation--the elephant in the economy--forced the MPC to focus on its mandate of containing inflation at 4 percent with a flexible margin of 2 percent on either side of the band.

Inflation has been elevated for many months now (see chart). Retail inflation has hovered close to 6 percent and wholesale inflation has been in double digits for over one year. Since January, retail or headline inflation has breached RBI’s upper threshold of 6 percent. But the CPI reading at an eight-year high of 7.79 percent for the month of April triggered alarm bells and pushed the MPC towards an immediate pivot on interest rates even at the cost of growth. 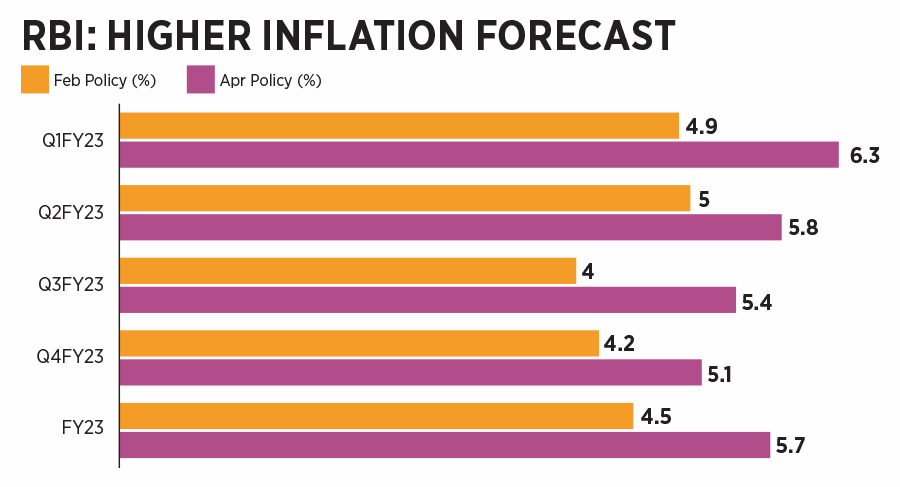 An ultra-accommodative monetary policy was crucial to cushion the severe impact of the unprecedented coronavirus pandemic. Nonetheless, like most global central banks, the RBI has been slow in its withdrawal of liquidity. Most economists agree the central bank is behind the curve on tackling inflation and rates. In turn, it will need to undertake successive and steep rate hikes to tame stubborn inflation.

Over the next quarter or two economists expect recovery to gain traction due to pent-up demand, opening up of contact-intensive services, lagged effects of ‘easy financial conditions’ and the government’s massive capex boost. But there are strong growth headwinds in the medium term.

“However, we believe the current recovery is unsustainable, due to higher inflation, tighter monetary policy and global growth slowdown,” says Varma.

In the March quarter, GDP growth slowed to 4.1 percent versus 5.4 percent in the previous quarter, according to data released by the government on May 31. The data indicates GDP growth of 8.7 percent in FY22 against a contraction of 6.6 percent in FY21.