Central bank governors have channeled their powers to protect economies through the pandemic. But will they be able to deal with the fresh challenges posed by the Russia crisis and inflation? 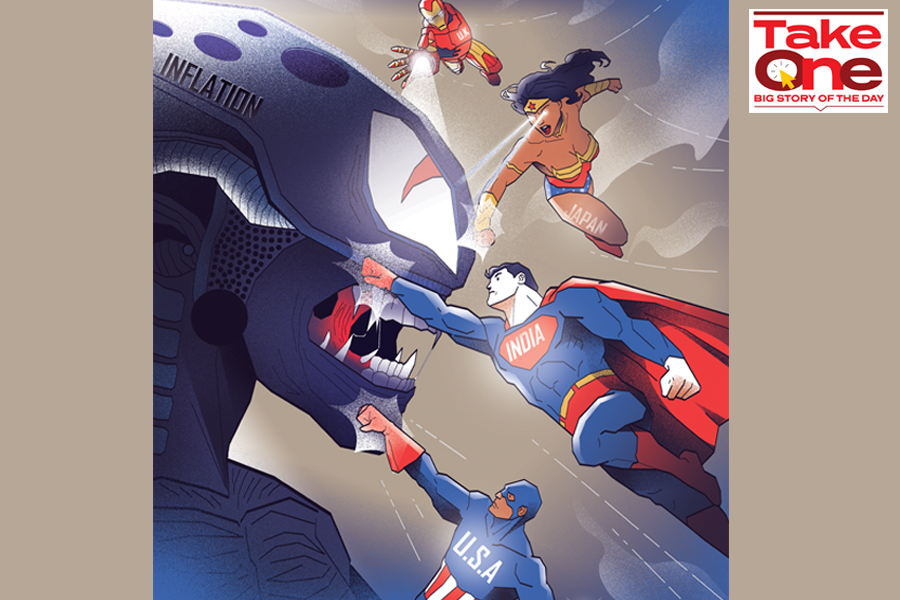 Will the superheroes be able to come to the rescue and avert the impending gloom? Illustration: Chaitanya Dinesh SurpurIf the unimagined magnitude and devastating harm created by the Covid pandemic were a sci-fi film, then central bank governors would be among the superheroes. After all, much like Captain America or Wonder Woman, hadn’t they channeled untold financial ammunition to protect the global economy from an alien virus that had the world topsy-turvy in deep distress?

One may even have hoped this sci-fi movie would have a happy ending after the alien virus’s unrelenting onslaughts on life and livelihood over the past two years. But, exhausted, central bank governors now find themselves staring at a familiar, partly self-created, but powerful new enemy: Inflation.

Unfortunately, these superheroes do not have sophisticated bullet-stopping armours and hi-tech mechanisms to dodge or instantly heal from the fierce attack of the new enemy that has strengthened and soared to multi-decadal highs. Now, the world precariously finds itself on the brink of a recession.

Can the superheroes come to the rescue and avert the impending gloom?

Russia’s invasion of Ukraine has further unsettled a fragile global economy which was in the process of recovering from the lows of the pandemic. The sanctions and counter-sanctions have exacerbated global supply chain disruptions and inflationary woes.

“A crisis upon a crisis,” lamented the International Monetary Fund’s managing director Kristalina Georgieva in a blog post dated May 22. “The global economy faces perhaps its biggest test since the Second World War.”

Worldwide, food and fuel prices have been inching upwards, stoking a cost-of-living crisis. In turn, central banks have spurred into action to rein in inflation by tightening financial conditions for policy normalisation after months of ultra-accommodation.

“Add to this sharply increased volatility in financial markets and the continuing threat of climate change, and we face a potential confluence of calamities,” added Georgieva.

The US Federal Reserve, Reserve Bank of India, Bank of England, and several others, have signalled a series of rate hikes for price stability in the face of fairly broad-based stubborn inflation. This has made investors and consumers edgy.

In the last few days financial markets have witnessed a sell-off across asset classes: Stocks, bonds, cryptocurrencies, gold, to name a few.

In April, the IMF projected the global economy to grow by 3.6 percent in 2022 and 2023 (see table). This could give the impression that a global recession--generally seen as a significant decline in widespread economic activity that lasts more than a few months and is characterised by a decline in average per capita real income—is not imminent.

However, since April, the economic outlook has worsened, and might call for a downward revision. In fact, the IMF’s current growth forecast of 3.6 percent is lower than its previous estimate of 4.4 percent in January.

At the World Economic Forum (WEF) Annual Meeting in Davos the prospect and concerns of recession were top-of-mind for global CEOs and policymakers. Amid supply chain issues and the energy crisis, Jane Fraser, CEO, Citigroup sees Europe heading into recession. “There are three R-words right now. It’s Russia, it’s recession, and it’s rates,” she said at the Global Economic Outlook panel discussion in Davos on May 23.

David Rubenstein, co-founder and co-chairman, The Carlyle Group, was cautious of unfavourable headwinds and did not completely rule out a mild recession in the US. However, Rubenstein said he didn’t expect the current economic upheaval to mirror any of the deep crises—such as the dotcom bubble, the global financial crisis, or the pandemic—seen over the past last 25 years.

Inflation at a multi-decadal high of 8.3 percent in April has left the US Fed with few options but to undertake sharp rate hikes to cool the overheated economy and undo its excessive fiscal stimulus in the past.

Bank of America’s global economist Ethan Harris expects a “bumpy landing” rather than an outright recession in the US. He sees the ongoing slowdown drop to 0.4 percent by Q4 2023 and a mirror image growth pattern in 2024.

“The US economy has only one major imbalance—an overheating labour market and the associated risk of sustained high inflation. Hence, we don’t expect sharply slowing growth to expose major weaknesses in the economy. We think debt loads are manageable, credit quality is good, froth in the equity markets has been taken out from the recent correction, and households still have considerable excess savings to draw down,” Harris explains in a recent report.

Gita Gopinath, the first deputy managing director, IMF, at Davos highlighted that the raging war between Russia and Ukraine has been a major setback for global recovery. In effect, the scope of issues troubling countries may vary in degree, but given the ‘forces of integration’ no economy can escape unscathed from the turbulence.

Though central banks have been forced to raise rates to battle inflation, Gopinath pointed out growth challenges arising from the adverse consequences for global finance and trade.

Rising global food and fuel prices, and the withdrawal of excess liquidity coupled with a series of rate hikes by central banks to tame elevated inflation levels, have heavily impacted global recovery by hurting investment and consumption. To make matters worse, the slowdown of the Chinese juggernaut has been a big drag on the world economy. It is hard for the world to not sneeze if China catches a cold.

China accounts for 19 percent of global output. China’s zero covid policy; the ensuing lockdowns and crackdowns; impact of the credit crunch on the property market, have all stoked supply disruptions even as its demand for exports has suffered.

Although People’s Bank of China has bucked the global trend by reducing interest rates to boost borrowing and consumer spending, unemployment is on the rise, and lead indicators of economic activity are weak (see charts). UBS has cut its China GDP growth forecast to 3 percent from 4.2 percent for 2022.

“The lingering restrictions and lack of clarity on an exit strategy from the current Covid policy will likely dampen corporate and consumer confidence and hinder the release of pent-up demand,” says Tao Wang, managing director and head of Asia economic research, UBS, in a recent report.

Wang expects China’s GDP in the second quarter to shrink by 8 percent on a sequential basis with a shallow V-shaped recovery in the third quarter.

In the midst of this storm, India is looked upon as a relatively attractive emerging market, and has been tagged as the fastest growing economy among G-20 nations after it recorded a GDP growth of 8.3 percent in CY21. 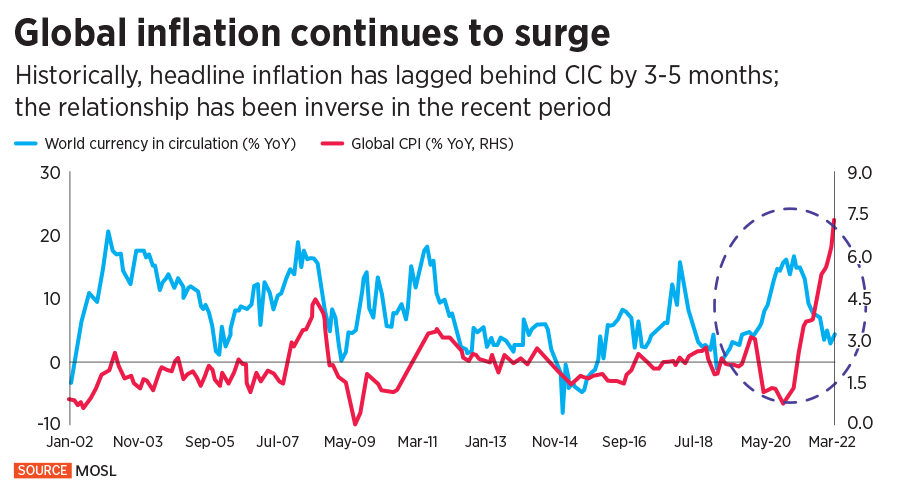 On a standalone basis, the country is grappling with multiple challenges, but the outlook for its long-term growth story is believed to be intact.

In an off-cycle monetary policy meeting the Reserve Bank’s Monetary Policy Committee (MPC) hiked the benchmark repo rate to 4.4 percent to tame high inflation. The CPI and WPI reading for April stood at multi-year highs of 7.8 percent and 15.1 percent respectively.

Crude oil at over $100 per barrel has disturbed the government’s fiscal math and the central bank’s move towards policy tightening presents challenges due to the Centre’s massive borrowing programme to the tune of Rs 1o lakh crore. Economic activity remains subdued and the growth cycle is yet to gain momentum.

“Our estimate is that real GDP will be reported to have grown 5 percent YoY in Q4FY22, implying 9 percent real GDP growth in FY22. But this headline growth will be despite the large discrepancy between the current account balance and the inflation-adjusted net exports of goods and services,” says ICICI Securities’ Chief Economist Prasenjit Basu.

As central banks do a policy U-turn and channel their powers to tackle inflation with a larger pivot on rates, the fear is they may tip the balance once again and turn a delicate stagflation-like-situation into a recession. May the force be with them as they attempt to tie down inflation without unleashing the menaces of recession.

Tweets by @forbesindia
Playing fantasy, rummy or even Candy Crush is not esports: Lokesh Suji
From Japan to Zambia, the push for paid menstrual leave