On World Menstrual Hygiene Day, here's a tour of countries in the world that have given women time off work to recover 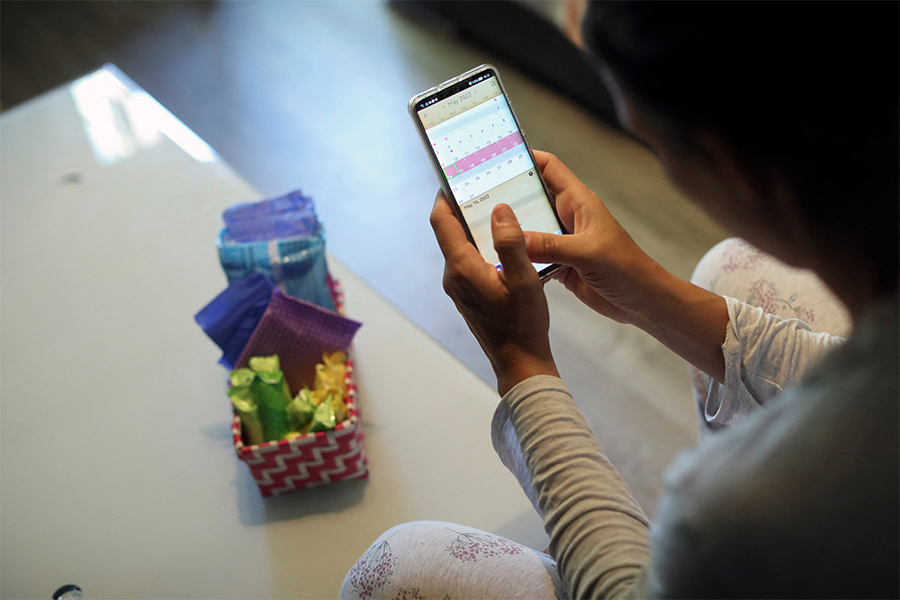 Raquel del Rio, 36, who works in police forces, poses as she observes a period calendar tracker app on her mobile phone at her home in Madrid, Spain, May 16, 2022. Spain has become the first Western country to move to give menstrual leave, with a draft bill unveiled by the government on May 17 giving women unlimited leave for period pain, provided they have a doctor's note. (Credits: Isabel Infantes/ Reuters)

Many women have painful periods, but only a handful of countries, largely in Asia and most recently Spain, have moved to give them time off work to recover.
Here is a tour of some of them ahead of World Menstrual Hygiene Day on May 28.

Spain has become the first Western country to move to give menstrual leave, with a draft bill unveiled by the government on May 17 giving women unlimited leave for period pain, provided they have a doctor's note.

The draft legislation has to be approved by parliament, where the government is in a minority, before coming into force.
The proposal comes amid a campaign by feminists worldwide to demolish taboos around periods, but it has drawn criticism from Spanish unions, who warn that, far from liberating women, menstrual leave could prompt employers to prioritise men when hiring.

Indonesia passed a law in 2003 giving women the right to two days of paid menstrual leave per month, without giving prior notice.
But the provision is in practice discretionary.
Many employers allow only one day a month, while others give no menstrual leave at all, either because they are unaware of the law or choose to disregard it.
An International Labour Organization report from 2003 warned that the requirement to give women 24 days menstrual leave on top of their 12 days of annual leave represented a "significant cost" for many employers, causing them to discriminate against women in their hiring policy.

In Japan, a law dating as far back as 1947 states that companies must agree to give women menstrual leave if they request it, for as long as they need it.
It does not, however, require them to pay women during menstrual leave, but around 30 percent of Japanese companies offer full or partial pay, according to a 2020 labour ministry survey.
Not many women take advantage of the law, however. The survey of around 6,000 companies found that just 0.9 percent of eligible workers had taken menstrual leave.

In South Korea, women are entitled to one day of unpaid menstrual leave per month, with employers who refuse facing fines of up to 5 million won ($3,950).
The leave used to be paid until 2004, when South Korea went from a six-day to a five-day work week.
A 2018 survey showed greater take-up than in Japan, with a little over 19 percent of women taking time off. But many said they choose not to, because of conservative or unfavourable work environments.

In Taiwan, the Act of Gender Equality in Employment gives women three days of menstrual leave per year, which are not deducted from the statutory 30 days of regular sick leave.
Women can only take one day in any given month.
Like sick leave, workers on menstrual leave receive only 50 percent of their salary.

Zambia became the envy of other African countries when it passed a law in 2015 allowing women to take a day off work during their period, without giving notice or supplying a doctor's note.
While the measure is generally accepted and supported, not all employers willingly comply with the law on what is discreetly referred to as "Mother's Day".
But, encouraged by trade unions, women are starting to exercise their right,
communications expert and women's rights advocate Ruth Kanyanga Kamwi told AFP.

Some companies have not waited to be compelled by law to offer women menstrual leave.
They include the Victorian Women's Trust, an Australian gender equality agency, which offers employees 12 days of menstrual and menopause leave; Indian food delivery startup Zomato, which offers 10 days of period leave; and French cooperative La Collective, which gives staff up to one day of period leave per month.
© Agence France-Presse