Tightness in semiconductor supplies over the past two years have in some cases caused auto and consumer appliance production lines to shut down, and the United States has repeatedly urged Taiwan, as a major chip producer, to do more 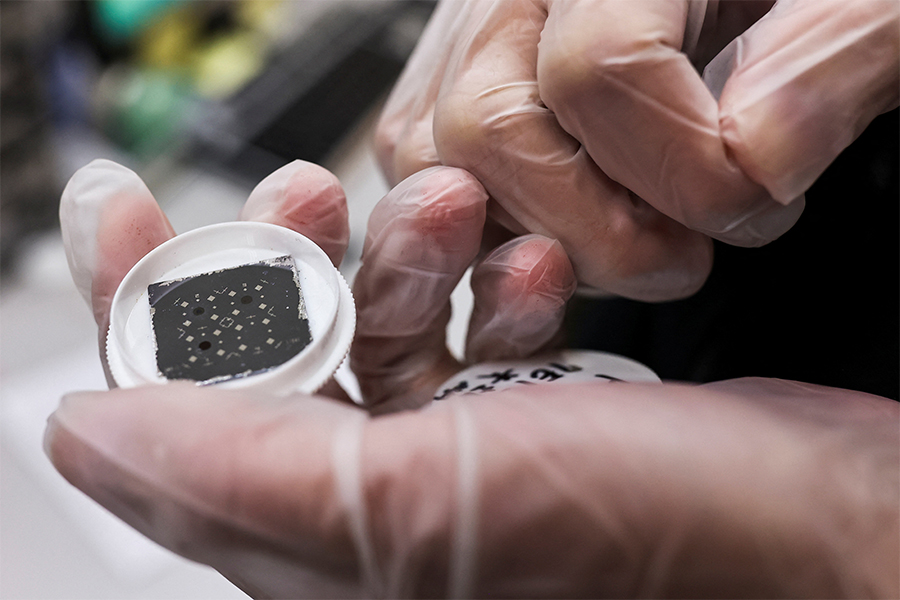 An engineer holds a chip in the middle of testing reactions from different materials and shapes that can have on the chip at the Taiwan Semiconductor Research Institute (TSRI) in Hsinchu. Image: Ann Wang/ Reuters

TAIPEI (Reuters) - The United States is grateful for Taiwan's efforts to resolve a global shortage of semiconductors and further improvements can be made to speed up supply chains, the top U.S. diplomat in Taipei said on Friday.

Tightness in semiconductor supplies over the past two years have in some cases caused auto and consumer appliance production lines to shut down, and the United States has repeatedly urged Taiwan, as a major chip producer, to do more.
Sandra Oudkirk, director of the American Institute in Taiwan, told an industry forum the COVID-19 pandemic has both increased demand and "stressed" the world's trading system.
"While Taiwan's semiconductor companies continue to churn out chips at an increasingly fast pace, logistical challenges have stymied efforts to keep up. We've all learned about the long supply chains stretching from the fab to the showroom. We have made improvements, but room exists for further progress," she said, in a transcript provided by her office.
Oudkirk pointed to U.S. Department of Commerce data that over the last two years the median chip inventory in the United States has fallen from 40 days to fewer than five.
Companies in Taiwan, home to the world's largest contract chipmaker TSMC, have said they expect tight supplies to continue this year and probably into 2023 even as they ramp up capacity expansion.
Oudkirk said the United States deeply appreciated the willingness of Taiwan's firms to deal with the problem.
"You stepped up production when the auto industry sent out a call for help; you have worked with educational institutions to ensure that we are preparing the next generation of engineers," she added.
Washington has been keen to get more Taiwanese companies to follow TSMC's lead and build plants in the United States. TSMC, a major Apple Inc supplier, started construction last year at a site in Arizona where it plans to spend $12 billion to build a computer chip factory.
Oudkirk said they would be organising a delegation of Taiwanese semiconductor-related firms to visit Phoenix, Arizona this summer to encourage further investment.
(Reporting by Ben Blanchard)