Momos, idlis and a pinch of salt: Can Zomato deliver on time?

From 'outrageous' to 'ridiculous', Zomato's plan to deliver in 10 minutes has evoked extremely caustic reaction from food lovers, eaters and makers. Is there a method in the madness or is Zomato biting off more than it can chew? 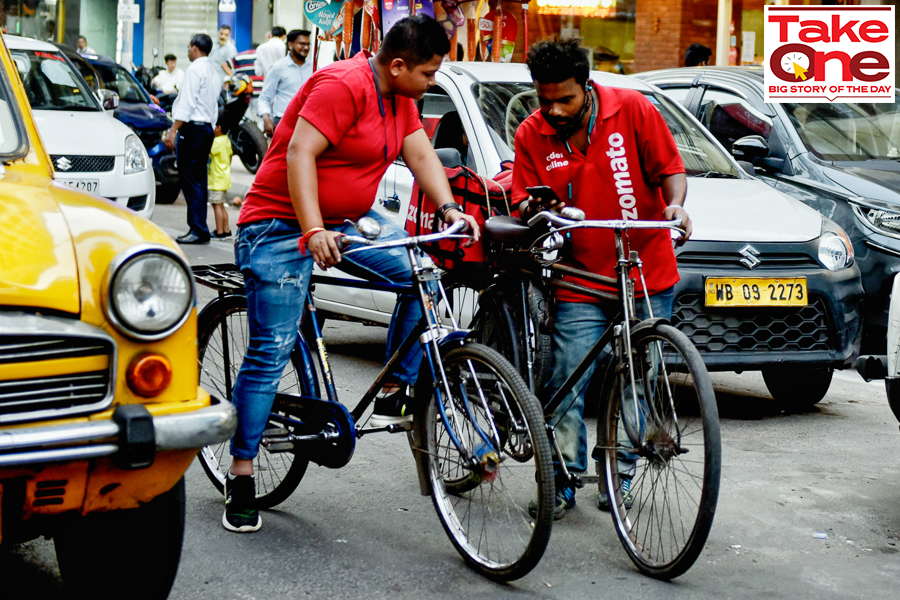 Tuesday 6.30 pm. March 22: When Rohit Dubey’s hunger pangs became unbearable, he brandished his iPhone, opened the online food delivery app and ordered a plate of steamed chicken momos from his favourite brand in Greater Noida, just a kilometre away from his gated community in Gaur City.

But there was no sign of the food, and after 15 minutes, the property dealer got restless. “How long will you take?” he howled at the delivery boy over the phone. Around 7, the doorbell rang. “I was there on time, but the food was not ready,” the delivery agent said apologetically. “Thoda traffic bhi tha (there was a bit of traffic),” he stressed. When he opened the packet, he was even more incensed. “It’s ridiculous,” he laughed. Reason: The branded tape used for packaging was of a different online food delivery player.

Wednesday 7.30 am. March 23: Gunjan Agarwal returned late from her morning jog, her cook, too, was running late, and the kids had to be dropped to their school in Gurugram by 8.15 am. Idli was the solution, so the communication professional placed the order from her regular restaurant. It took 40 minutes to deliver the food. “Same old excuses,” says the 38-year-old. Sometimes the delivery guys blame restaurants, sometimes the security guard. “All play blame games. At the end of the day, all they have to say is sorry,” she rues. There are times, Agarwal points out, when the packaging is weak and sambar spills, chutney tastes like a frozen dish. “There is already too much on their plate to solve,” she laments. “But all they care is spicing up their story,” she says.

Thursday. 10 am. March 24: In Gurugram, Vishal Anand thunders: “The 10-minute food delivery plan is absolutely a marketing gimmick.” He’s referring to ‘Zomato Instant’, the food-aggregator’s recently-announced plan to deliver orders within 10 minutes. One can’t even digest the news, he lets on, with a bag of salt. “Who really wants momos, idli, poha in 10 minutes?” asks the founder of Moonshine Food Ventures, which owns restaurant brands like SAGA, Glasshouse and Cafe Staywoke.

Anand explains why the idea of instant food delivery is loaded with heavy odds. First, consumers want fresh food in reasonable time. “Even in restaurants, people wait for 15-20 minutes to get fresh food,” he says. Second, super-fast delivery is nothing less playing with the lives of the riders. “You are putting them in danger,” says Anand, who also happens to be franchisee partner of brands like Farzi Cafe and PaPaYa. “The move is illogical,” he adds.

Anand’s scepticism is shared by many. Take, for instance, food industry biggie Zorawar Kalra. The founder of Massive Restaurant too is unconvinced with the speedy idea. “It is difficult to send high-quality food in 10 minutes,” he says, adding that none of his brands would be able to deliver anything in 10 minutes. “We believe in quality over speed,” he adds.

In a tweet early this week, announcing his plans to roll out Zomato Instant, founder and CEO Deepinder Goyal started with food quality. “10/10,” he tweeted, alluding to the quality of the food to be delivered. Goyal underlined that the food delivery player would not compromise metrics such as safety of delivery partners and delivery time ‘to achieve the impossible’.

A company spokesperson explained how ‘Instant’ will work. The online food delivery player will handpick bestseller items (around 20-30 dishes such as poha, chhole chawal, momos, idli sambar, juices) from restaurants based on demand predictability and hyperlocal preferences. The fulfillment would rely on a dense network of finishing stations, which would be located in close proximity to high-demand customer neighbourhoods. Sophisticated dish-level demand prediction algorithms, and future-ready in-station robotics are employed to ensure that food is hygienic, fresh and hot at the time it is picked by the delivery partner, he added.

The ground reality, though, looks massively divorced from the intent. Forbes India spoke to over two dozen food delivery riders spread across Delhi NCR—Noida, Gurguram and Delhi—on Wednesday to get a sense of what do the ‘warriors’ on the road feel about the new battle plan. All of them, irrespective of the camp they belong to, termed the move ridiculous. “Already, we are under immense pressure to deliver the maximum, now what,” asked one of the riders. Said a second one: “Do they really care about us? Are we a disposable food item?” “Why don’t they hire robots to deliver,” asked his colleague. “Do they have any intelligence?” reacted another delivery executive.

Food analysts and industry veterans tell us the difference between intelligence and artificial intelligence. After all, Zomato is banking big on the power of AI to pull off the ‘impossible’. “Now AI will tell them what time do we want to have tea and the delivery boy will be outside our house at that prescribed time,” says Jaspal Sabharwal, a private equity veteran and CEO of TagTaste, a sensory analytics and product development platform. Losses are piling up, investors are losing patience and the stock price is battered. From an all-time high of Rs 169.10 on November 16, 2021, the stock was trading at Rs 81.60 at 10.40 am on March 24; the number is still above the IPO issue price of Rs 76.

Equity experts and brokerages paint a grim picture in their third quarter result analysis of Zomato. “The negative surprise,” Goldman Sachs pointed out in its report in February, “was slowdown in monthly transacting users, which we believe was a function of the resumption of dining out during the quarter.”

Though the order volumes saw a healthy 5 percent quarter-on-quarter (q-o-q) growth, it was offset by a decline in average order value. Zomato spent an extra Rs 2.5 per order to drive 2 percent q-o-q GOV (gross order value) growth, indicating a slowdown in growth for food delivery as Covid-related tailwinds partially unwind, the report noted. Though the number of orders increased 5 percent q-o-q in to 141 million, AOV (average order volume) declined 3 percent q-o-q to Rs 389. “We expect Zomato to reach adjusted Ebitda breakeven by end of FY24,” the report maintained.

A long period of losses notwithstanding, what is also not helping Zomato’s cause is its latest move to double down on hyperlocal grocery through Blinkit. Grofers, the earlier avatar of the 10-minute grocery delivery app, reportedly closed FY21 with an operating revenue of Rs 2,725 crore but losses leapfrogged to Rs 6,127 crore. Though the Ebitda margin improved from a negative 38.5 percent in FY20 to a negative 16.5 percent, the company reportedly accumulated losses of Rs 6,126.6 crore on its balance sheet till the end of March 2021.

A seasoned venture capitalist tries to make sense of the 10-minute move. “It’s desperation,” he says, requesting anonymity. While the core business continues to bleed, the hunt for other engines of growth has not made any tangible progress. “It’s experimenting too much,” he adds, alluding the move to take a stab at hyperlocal grocery through Blinkit. “10-minute grocery is uncooked rice and pulses. 10-minute food delivery is half-cooked rice,” he says.

Quick food delivery, though, has found some takers. Take, for instance, the food industry heavyweight Sanjeev Kapoor. The celebrity chef reckons there might be takers. “When there is something new, to begin with, it sounds outrageous,” he says. Today, 10-minute food delivery may sound ridiculous, but it might become a way of life. “Everything is possible. Time and relationship are a state of mind,” he says.

Looks like Zomato needs all the time in the world—time to pull off an audacious gambit; time to mend and build relationships with delivery partners, and time to keep working on the state of mind.