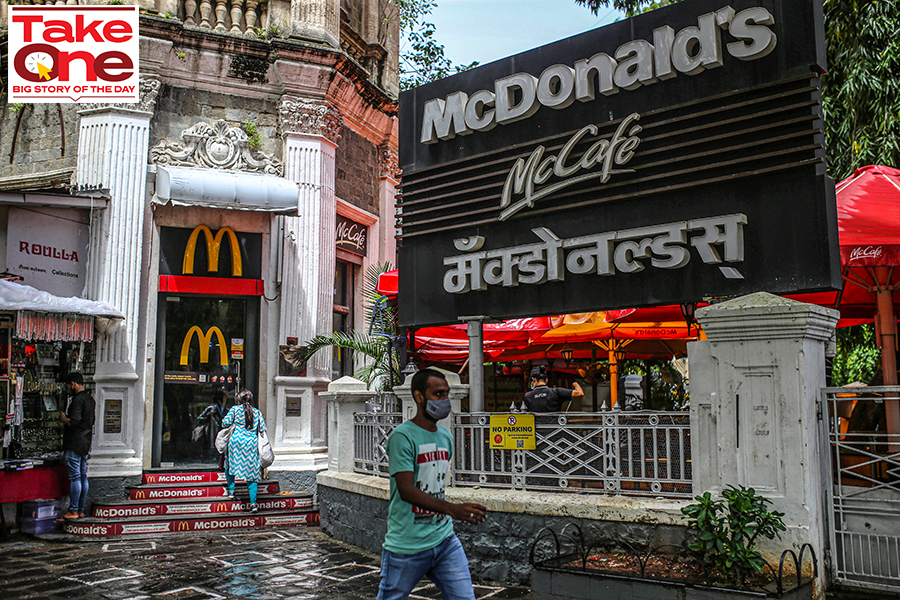 During the last quarter, Hardcastle Restaurants, the master franchisee of McDonald's restaurants in west and south India, opened eight outlets, taking the total number to 316 across 44 cities
Image: Dhiraj Singh/Bloomberg via Getty Images

When Amit Jatia, vice chairman of Westlife Development Ltd, opened the first franchise of McDonald’s, in Mumbai’s Bandra, on October 21, 1996, the QSR (quick service restaurant) ecosystem in the country was undercooked. Neither the supply chain nor quality processing existed, and most of the agricultural produce was for home consumption. “Like Maruti helped build the entire ecosystem for the automotive industry, we helped kickstart the QSR ecosystem,” says Jatia, whose company owns Hardcastle Restaurants, the master franchisee of McDonald’s restaurants in west and south India.

As it completes its 25-year journey in India, the company has held on strong, recording its highest ever revenue of Rs 476.83 crore in the quarter ending December 2021, a year-on-year jump of 46 percent. It also clocked an Ebitda of Rs 83.62 crore, with a year-on-year rise of 61 percent, and an all-time high PAT (profit after tax) of Rs 20.82 crore. During the period, McDonald’s opened eight new outlets, taking the total to 316 across 44 cities.

“At a time, when two tranches of the quarter, the beginning of October and the end of December, were under some sort of Covid restrictions, we recorded the highest ever sales and highest ever profit,” says Jatia. “It shows how we’ve emerged stronger through Covid, despite facing a battering in the very first wave.”

In the early days of the pandemic, through the April-June quarter of 2020, McDonald’s recorded sales of less than Rs 100 crore, as opposed to the usual Rs 400-odd crore. “We had a lot of write-offs, since food had a limited shelf life and there was no consumption,” Jatia adds. In the second wave, too, business was weak, with deliveries offering the only silver lining.

Through a supremely challenging time for the F&B industry, McDonald’s pivoted to an omni-channel strategy, boosting takeaways, deliveries and drive-thrus at a time government-mandated restrictions on dine-in came into play. While its off-premise business brought in 80-90 percent revenues in the April-June quarter of 2020—which coincided with the first wave—it has now settled to about 60 percent.

But even with a number of dine-in restrictions being waived off, the delivery business continues to grow: McDelivery reported its highest ever revenues in the December-ended quarter of FY22, registering a 55 percent year-on-year jump. But the growth hasn’t come at the cost of in-store business as that, too, has risen by about 40 percent during the period.

Says Jatia, “The brand today has pivoted and accelerated the digital journey, and built an out-of-home consumption business that didn’t exist, and is here to stay. Covid also forced us to relook at our cost structure, be more competitive and bring our breakeven points down.”

“When the pandemic came,” he adds, “we were able to navigate it well, because we entered the phase with a strong balance sheet, with cash on hand rather than debt. Besides, we had completed our reorientation as a brand and had top-of-the-line technology platform.”

Reimagining the business is something Jatia has done since the inception of McDonald’s in India. When the first outlet in Bandra was greeted with snaking queues, affordable pricing was the company’s USP. But the brand soon confronted its first challenge: Customising tastes to the Indian palate. That’s how the Aloo Tikkis and the Pizza McPuffs were drafted into the menu. “We had our build phase from 1997 to 2003, where we not only looked at the customer value proposition and getting the menu right, but also focussed on improving unit economics,” says Jatia.

In 2003, McDonald’s defined its principal competitor: The housewife, around whom the eat-at-home culture flourished in India. During this period, McDonald’s opened over 100 restaurants and started customer affordability programme—the Happy Price menu that pulled customers out of their homes. “In 2003, Indians would eat out only three out of 100 times in a month, by 2012 the number became eight,” says Jatia.

It also launched McDonald’s into the accelerate phase when it started properties like the McCafe (which brought in payback in 18 months for a Rs 20 lakh investment), indulgent products like the McFlurry, and amped up off-premise ordering. “On the foundation of technology, digital and omni-channel, we saw our margins growing,” adds Jatia. “It helped us pivot very quickly when the pandemic struck.”

Having weathered economic downturns, Covid and everything in between, the company has now opted for an aggressive expansion path: In October, it announced it will invest Rs 800-1,000 crore over the next 3-5 years to take its restaurant count to over 500, and converting its outlets into ‘Experience Of The Future’ restaurants that have uber-modern facilities like touch-screen ordering.

“The rupee value of the delivery business will remain steady, and with in-store coming in, it will mean an 8-10 percent growth in average volume,” says Jatia. “My outlook for the future is bullish and positive.”