The making of Vikas Khanna

From chhole-bhature and small-town Punjab to Michelin stars and Manhattan, Vikas Khanna travelled intrepidly into the unknown and emerged arguably as India's food ambassador to the world 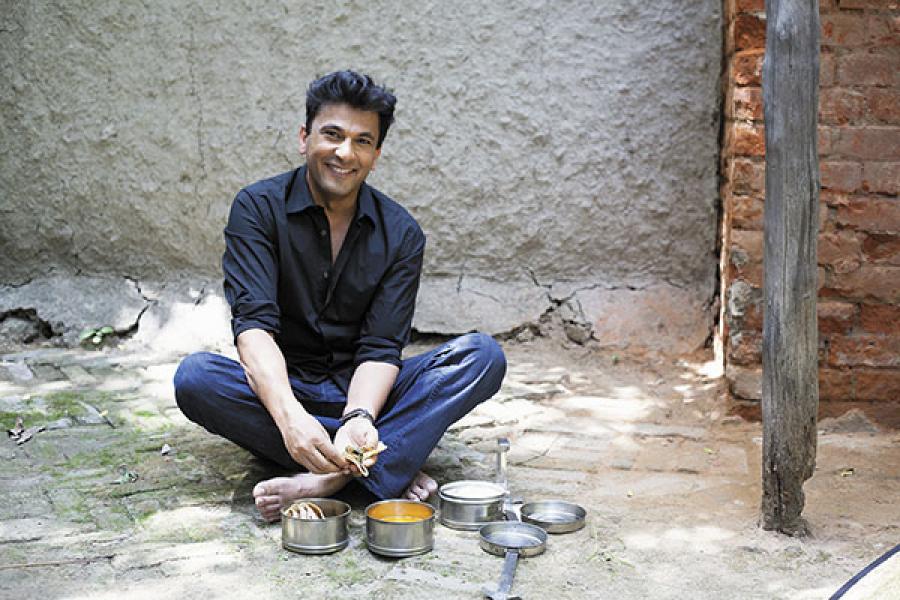 It takes just about a minute to make it from the entrance of the national crafts museum in Delhi to the cafe inside. Even less if you make a dash for the cooler interiors, given that the temperature outside is hovering around 35 degrees Celsius. Except if you are walking in with Vikas Khanna.

The Michelin-starred chef of New York’s modern Indian restaurant Junoon—who has cooked for the Obamas, the Dalai Lama and recently served a seven-course meal for Narendra Modi and top CEOs when the Indian PM was visiting the US—is polite to a fault with every starry-eyed visitor. He acknowledges anyone who gives him a knowing smile, stops to shake every hand that’s extended his way and acquiesces to every photo request that diners make dropping their food midway. The only offer he turns down is the one to help him carry his pile of clothes for the photo shoot that is to follow; he swats the request with a wave of hand and asks, “May I help you with your bag instead?”

That dismissive hand gesture is back minutes later when the waiters at Cafe Lota bring him the menu. “Kuchh bhi chalega. Do-teen plate kuchh order karenge aur sab mil-baat ke khayenge [Anything will do. We’ll order a few items and share among us],” he tells him.

Perhaps the concept of the unpretentious sharing platter is reminiscent of Khanna’s childhood memories of a langar (a free, communal kitchen for the Sikhs), which he would frequent with his biji (grandmother). Over the years, he has often returned to the langar in his hometown Amritsar, filmed it in his documentary Holy Kitchens and replicated it in the US, too, most notably at Times Square, in the aftermath of the Wisconsin gurdwara shooting in 2012 that killed six people. Asked by the White House to spread awareness about Sikhism, Khanna chose culinary allusions over stodgy homilies to contain flared-up communal emotions. Not just because he interprets religion “from a non-religious perspective”, as he puts it, but because, in his life, whenever the going has gotten tough, Khanna has always sought refuge in the kitchen.

Take his club foot, for instance, a condition of misaligned legs that he was born with in November 1971. Despite a surgery in his infancy in the middle of the Indo-Pak war, Khanna, the son of a video cassette library owner, had to wear wooden shoes till his teens. While that allowed him to break crackers with his feet during Diwali, the ungainly clogs subjected him to ridicule from his peers. The deformity also impaired his ability to run; it imposed on Khanna a stay-at-home childhood, shadowing his biji in the kitchen. And that’s where his initiation into cooking began. “At that time, people thought it was crazy that I was being taught to cook and wash utensils. Biji was the only one supporting me in those early years,” he tells ForbesLife India as we sit down to an unhurried meal and conversation. 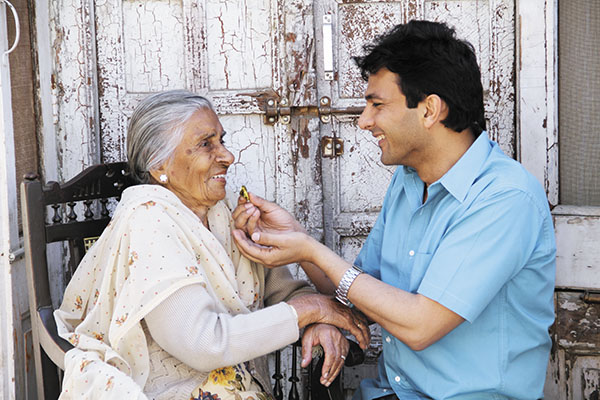 Photograph Courtesy Vikas Khanna
Woman behind the successful man: As a child, Vikas Khanna was a regular at the langar with his biji (grandmother). When he began to learn cooking, she supported him wholeheartedly

It was a decision that he didn’t regret. Nearly 35 years on, Khanna has not only taken Indian food to the world with award-winning restaurants in New York and Dubai, he is also the most recognised Indian culinary face on the global stage. With his multi-hyphenated career—that of a chef, writer, TV show host, filmmaker, what have you—Khanna has ensured that he leaves behind a legacy that goes much beyond, say, nailing spices in a dish or cooking seafood at the right temperature. But, if you ask him, the unassuming chef would sum it up as “all in a day’s work”. He would much rather talk about his days in biji’s kitchen and the early adversity that has defined his approach to food.

In 1984, when Khanna turned 13, his braces came off and the doctor pronounced him “free to run”. By then, he was too much in love with rolling the roti to do anything else. At that time, his mother and he would go from school to school selling chhole-bhature. During this process, the principal of a school contracted the duo to make 580 sweaters to help them raise money for their catering business. He didn’t know knitting, but such was his determination to earn enough to start a business that he sat in his searingly hot room in Amritsar and picked up the skill from his biji. 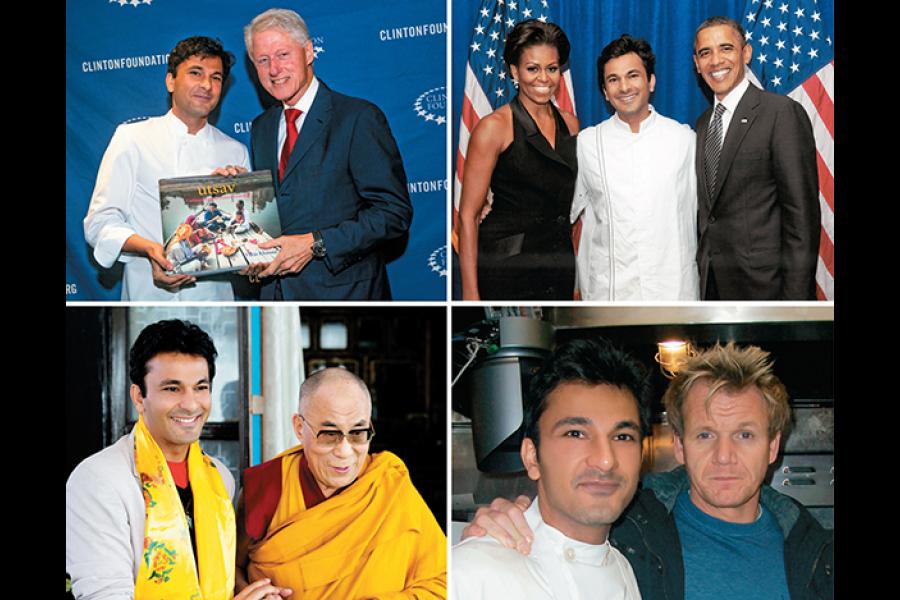 Image: Courtesy Vikas Khanna
Many for the album: (clockwise from top left) Vikas Khanna presents a copy of his book, Utsav, to former US President Bill Clinton; the acclaimed chef rubbing shoulders with US President Barack Obama and his wife Michelle; British chef Gordon Ramsay was floored by Khanna during their very first meeting; Khanna with the Dalai Lama