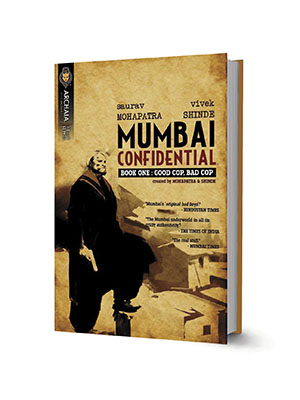 When i think of the graphic novels i have read—especially the ones with dark subject matter—it sometimes happens that a single image, just one panel among hundreds, stands out and seems to represent the tone of the whole. For instance, in Saurav Mohapatra and Vivek Shinde’s Mumbai Confidential, a noir thriller set in Mumbai’s ugly underworld, this image would probably be the wordless aerial shot of two people—one of them a little girl selling flowers—sprawled on the sidewalk on a gloomy night, after having been run over by a car. In Gautam Bhatia’s angry satire Lies: A Traditional Tale of Modern India, it might be the deliberately exaggerated drawing of a luxury plane that contains a swimming pool, a golf course and a shopping arcade, among other diversions. (The plane is being used by a minister flying over a drought-stricken area and making obligatory sympathetic noises.)

It would be hard to perform a similar exercise for Art Spiegelman’s magnificent memoir Maus, which was written as an attempt to record his parents’ experiences in the Nazi concentration camps; this is too multilayered a work to be reduced to one emblematic image. But there is a panel I noticed on a recent rereading, which sent a shiver down my spine while also reminding me of how closely sadness and humour, despair and affirmation run together in this story about human endurance in extreme situations.

The drawing shows Art’s father Vladek, having been incarcerated in a ghetto with his family and waiting to be taken to Auschwitz, coming across the dead body of the Jew who had turned informer and betrayed the Spiegelmans to the Nazis a few weeks earlier. “Hey!” Vladek tells a passerby, “This is the rat that turned my family over to the Gestapo.” It turns out that the informer had been shot after he was no longer of use to the Germans, and now Vladek is the one who ironically has the job of giving him a decent burial.

This situation in itself is a poignant testament to shared suffering and how easily oppressors can become victims and vice versa, but the image might also make you laugh out loud, because it includes a little wink at the book’s chief stylistic device. Throughout, Art Spiegelman depicts the Jews as wide-eyed mice and their German persecutors as smug, predatory cats. And so, in this panel, we have the use of the word ‘rat’ to describe the dead man even as the drawing itself portrays both Vladek and the corpse as rodents. When people extol the virtues of the written word (text-only literature) over visual forms such as cinema or the illustrated book, it is often pointed out that great writing enables you to use your imagination, while visual depictions make it too easy. There is some truth in this, but I’m not sure how text alone—even when created by a very skilled writer—can replicate the effect of this one drawing.

The really dark graphic novels can be unflinchingly gruesome in what they do show, but they might equally achieve their effects through the power of suggestion—as the Japanese master Osamu Tezuka repeatedly does in his medical thriller Ode to Kirihito. One of the most devastating scenes here concerns the fate of a young woman named Reika, who plays the role of a ‘human tempura’ in a crowd-drawing show involving a large vat of oil, but there is so much else to shudder at and sympathise with in this manga epic. Ode to Kirihito is about a disease that is transforming people into dog-like beasts in 1970s Japan—the protagonist Dr Kirihito, who has been afflicted, lives in the countryside, trying to cure himself and others; meanwhile, in sophisticated city hospitals, doctors take part in corporate power struggles. In Tezuka’s hands, this premise becomes a way of exploring exactly what words like ‘humanity’ and ‘morality’ mean.

Some people find it hard to come to terms with sexual explicitness in illustrated books—not least because ‘comics’ get dumped in the children’s sections of bookstores—but there have been works, ranging from Marjane Satrapi’s Embroideries to Chester Brown’s Paying for It, which do this exceedingly well, concealing subversive content beneath minimalist, placid-looking drawings. Satrapi’s story centres on tea-time conversations between a group of Iranian women, who use this private time to air their troubles and use humour as therapy, and the talk progresses from relatively innocuous matters to the need to fake virginity for one’s husband if necessary. Brown’s book, set in a very different society and narrated from a male perspective, is about his years of experience as a ‘john’—someone who regularly pays for sex with prostitutes—and the glimpse he got into the inner lives of these women, as well as the less savoury side of his own personality. It veers between personal epiphany and philosophical musings about love, commitment, power and control, and includes a series of endnotes where he discusses the ethics of prostitution.

It would be hard to imagine a non-pornographic film being made out of Paying for It, but one of the most gripping graphic novel-inspired films is David Cronenberg’s A History of  Violence about a man named Joey who escapes a life of violence to live a quiet existence as a regular family guy in a small town and then finds his past pursuing him to the degree that his own wife and children no longer know who he really is. John Wagner and Vince Locke’s book, which the film is adapted from, can be viewed as pure pulp—it lacks the finesse of works by Spiegelman or Satrapi—but in its scratchy, black-and-white drawings there is a raw, menacing quality that fits the subject matter perfectly—not least in the hard-to-look-at scenes near the end where Joey, having returned to confront his enemies after 20 years, finds that his childhood friend Ricky had been kept imprisoned and savagely tortured for all that time, while Joey had been peacefully leading his new life hundreds of miles away.

When he stares at the battered, maimed body of his friend, Joey is in a sense looking at a distorting mirror that shows what he himself might have easily become if things had turned out just a bit differently. In my mind, there is an odd but resonant link between this image and the one in Maus where Vladek Spiegelman gazes down at the body of the comrade who had betrayed him.