Meat & Greet: How Licious is spicing up its story

India's biggest meat and seafood brand aggressively ramped up its ready-to-cook division to take it to Rs 200 crore in two years. Can the meat unicorn keep up its gutsy run? 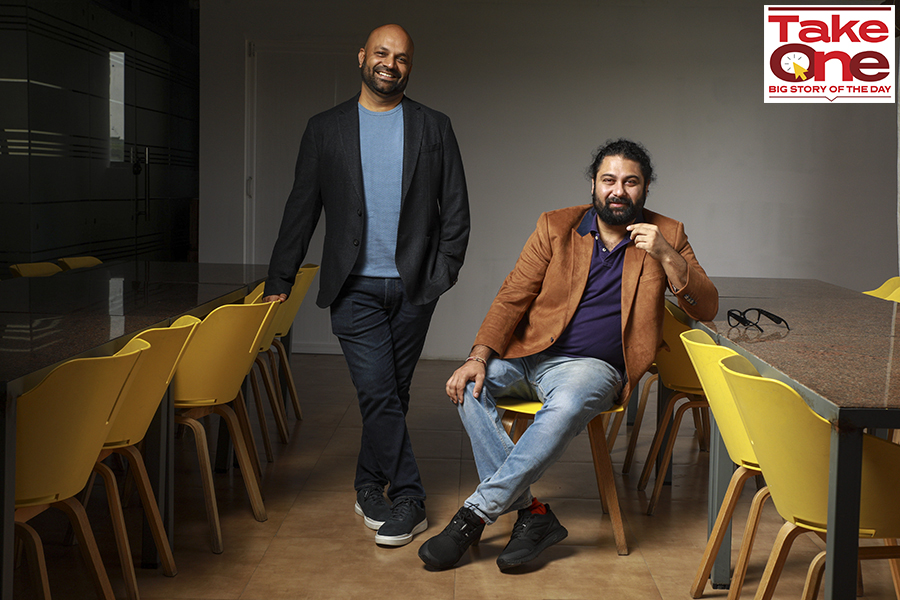 Over six years into the meat business, Abhay Hanjura and Vivek Gupta are no longer spring chicken! “Vegetarian eaters in India are not missing chicken,” reckons Gupta, who comes from a hard-core vegetarian family. His friend Hanjura interjects with a spirited argument. “What do our Western counterparts have,” asks the ‘branded butcher’ who has been working round the cluck—yes, in Hanjura’s LinkedIn world, the clock is replaced with ‘cluck’—to bring quality, variety and respect to the business of selling meat.

The Americans and Europeans, Hanjura continues with his high-pitched reasoning, don’t have many options. “Lettuce, beans, corns, peas. Right?” he says. Back in India, the vegetarians have kadhai panner, dal makhni, spicy aalo gobi. “They don’t even want to know how vegetarian chicken—plant-based meat—tastes,” he says, shredding the meaty logic built around the imminent rise, and threat, of fake meat. This kind of meat, he underlines, won’t make it big in India.

Well, the duo definitely know how to make real meat big in India. The friends started Licious in July 2015, slowly scaled it up during the initial years, and over the last two years made the most of the pandemic tailwinds to build their maiden venture into the biggest meat and seafood brand in India. In fact, in October 2021, India saw a unicorn emerge out of goat, fish and chicken when Licious raised $52 million (Rs 395 crore) in series G funding, to become the first direct-to-consumer (D2C) brand to enter the $1 billion valuation unicorn club.

The unicorn tag just means one thing to the co-founders. “We are no longer nobody,” says Gupta, alluding to the size of the company. “It’s a validation of what we have achieved so far,” he adds. From an operating revenue of just Rs 69.4 crore in FY19, Licious closed the next fiscal at Rs 131.8 crore. And then during the pandemic, it leapfrogged to Rs 420.3 crore in FY21. “We will stay aggressive,” Hanjura says, adding that the startup is now clocking an annualised revenue run rate of Rs 1,000 crore for FY21.

The meaty growth has come on the back of an equally bullish expansion. Look at the scale of operations between 2015 and 2021: From being present in one city (Bengaluru) to 15 cities; from an average of 3,000 orders per month to over 2 million per month now; and from five delivery centres to over 100. “We have started entering tier 2 cities,” says Gupta. The initial results, he adds, are encouraging. The SKUs have also grown at a fast clip: From 15-25 to over 5,000 during the same period. 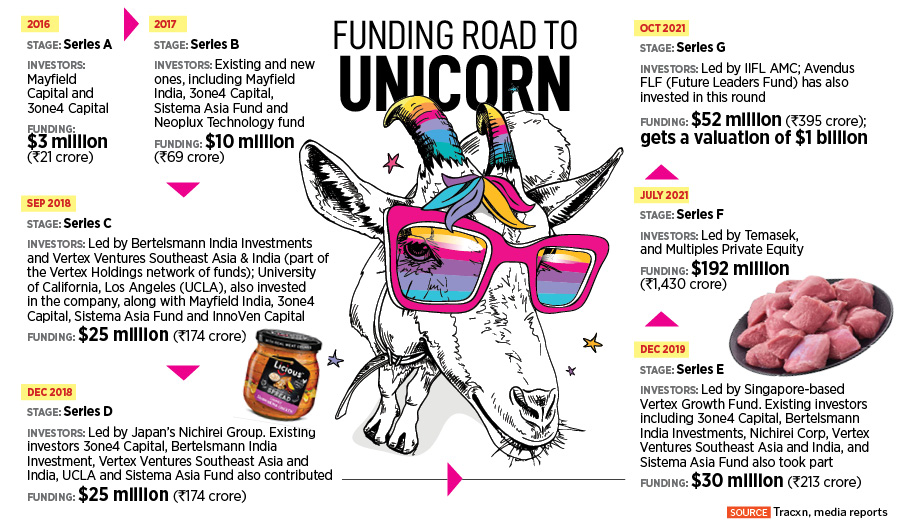 What is equally astonishing is the growth of its ready-to-eat/cook division. From less than a dozen SKUs in 2016, the startup now boasts of a portfolio of over 150. The growth, Hanjura points out, galloped over the last two years. “Now it’s close to Rs 200 crore, and contributes 20 percent to the revenue,” he says, adding that the headroom for growth is massive. The per capita meat consumption in India is just 7 kg. “Now compare this to the US, where it stands at 112 kg,” he says.

The backers are satisfied with the growth. “Licious has disrupted the meat and seafood category, which has largely been unorganised and underserved,” says Chetan Naik partner at IIFL AMC, which led the unicorn round of funding in October. The co-founders, he underlines, have demonstrated a high level of customer-centricity, unparalleled focus on supply chain, quality, freshness and innovation. “They have created a strong brand and are the undisputed category leader,” he says. The startup, he claims, is among the fastest growing D2C brands and is one of the few consumer businesses in India with very strong revenue retention metrics.

What is now a high-octane story, though, had a chequered beginning. The obstacles were many. One of the biggest was to build a brand out of an unorganised meat and seafood market in India, which is estimated to be worth around $40 billion. Thousands of mom-and pop meat stores peddling unhygienic stuff, and chicken and meat sold in black plastic bags was the way the industry worked for ages. Nothing was transparent: Neither the carry packs nor the business of meat. The Licious co-founders not only had to grapple with the stigma of buying and selling meat, but also had to contend with the plight of the ones consuming meat. “They didn’t have a choice,” says Gupta.

Hanjura reveals another interesting impediment. In spite of the fact that Licious was building something special and meaningful—it was the first in India to take a stab at organising the unorganised, and creating a branded meat play—many investors were not convinced with the story. “Personal biases of vegetarian capitalists came in the way of judging the business,” he rues. The category, he lets on, was not looked upon seriously. Naysayers and critics kept on harping on the jaundiced view that Indian consumers won’t pay for good quality, premium products. “We knew there were buyers,” he says, adding that the co-founders were confident of defying the odds. 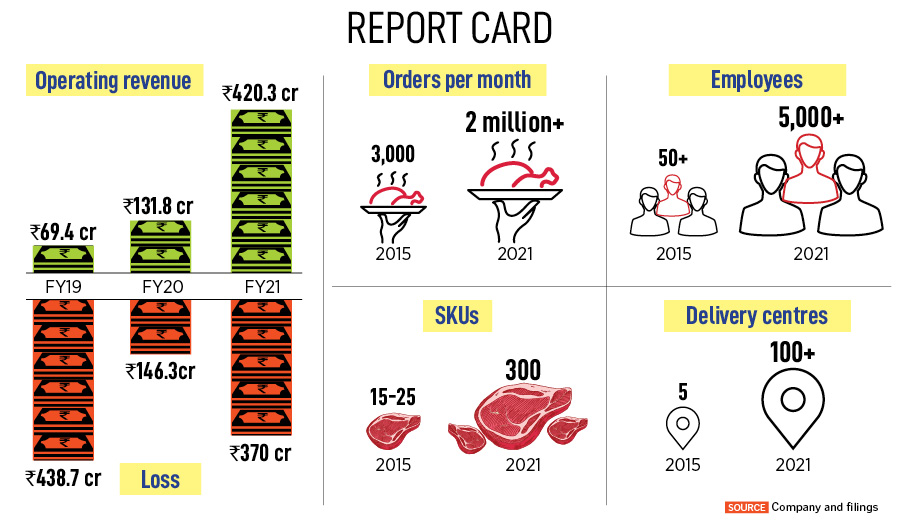 Early in 2021, the co-founders continued with their odd gambit. They roped in Bollywood actors Anil Kapoor and Arjun Kapoor as brand ambassadors. “It was a turning point for the brand and the category,” says Hanjura. The first mass advertising campaign by Licious magnified brand awareness. The reason was simple: The brand had so far clocked heady growth without any advertising. Advertising on prime time television added zing to the category, and speeded up the growth of the brand.

It was, however, the pandemic that provided the much-needed thrust to the branded play of meat in India. “Licious happened to be one of the direct beneficiaries,” says Anil Kumar, chief operating officer at RedSeer Consulting, India’s biggest home-grown consulting firm. While delivery became a norm, consumers were more receptive to experimenting with new brands. “It massively brought down the customer acquisition cost,” reckons Kumar. Another collateral benefit was user stickiness. The startup claims to have over 90 percent repeat consumption orders across markets. “Though it will be moderate over the next few years, the growth story stays intact,” he adds.

The co-founders too assert that Licious’ high-trajectory orbit won’t change. “What Amul did for milk and dairy, we would like to do the same in the branded meat play,” says Hanjura. Though six years old, it’s still early days for the brand. “We will keep working round the cluck to grow the business,” he smiles.

Tweets by @forbesindia
Photo Of The Day: Caretakers demand
New age tycoons believe in taking the ecosystem with them: Aaditya Sharda of Infra.Market