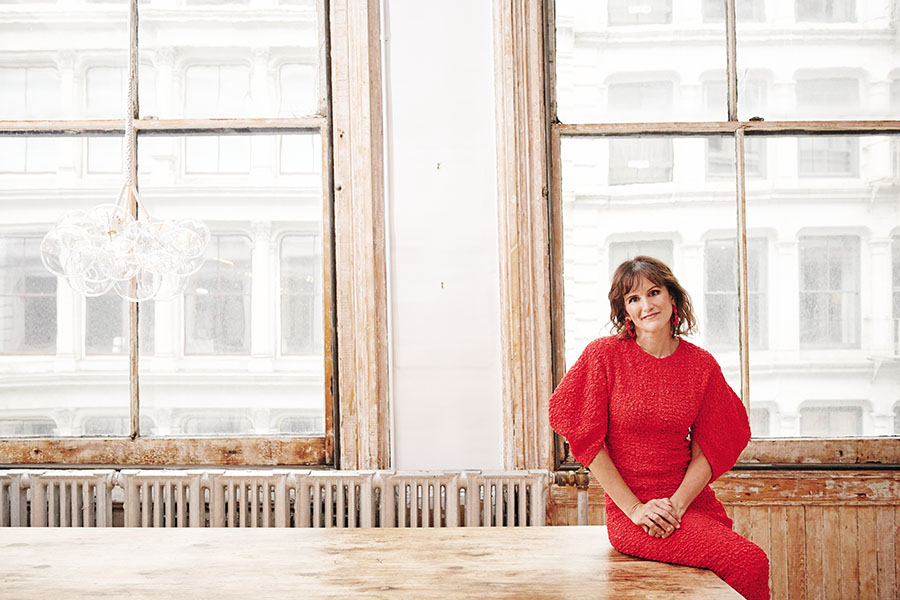 Amy Novogratz in her New York loft in August. A third of the capital for her Netherlands-based Aqua-Spark comes from US investors

Last year, Amy Novogratz gathered a seaweed farmer, an oyster-hatchery owner, the creator of a chip made from dehydrated salmon skins, a grocery buyer, a restaurateur and a reporter for a dinner party in her Manhattan loft. As her guests savoured arctic char poached in saffron with heirloom tomatoes and a pistachio pesto, she rose to explain the fish’s provenance: Matorka, a farm in Grindavík, Iceland, that raises its antibiotic-free fish on land in tanks using geothermal energy.

Back in 2016, when Novogratz’s Aqua-Spark fund invested $2.5 million in it, Matorka was producing just 50 tonnes of fish a year. By the time of that dinner party, it was selling 3,000 tonnes, including to celebrity chef Nobu Matsuhisa and US grocery delivery service FreshDirect. When Covid-19 hit and Matorka’s restaurant sales dried up, Aqua-Spark helped out with a $750,000 bridge loan. “The brand is back to a good place now,’’ reports Novogratz, who sees it growing to 6,000 tonnes by 2022—a “really good sweet spot where you can keep production controlled, know your market, know your customer, really trace everything”.

The 45-year-old Novogratz is herself in a sweet spot these days. A decade ago, she was diagnosed with a brain tumour doctors warned could kill her. A risky 20-hour surgery excised the tumour but left her with balance and mobility problems—on top of blindness in one eye from a childhood accident. Today, she and her husband, Mike Velings, 50, run Aqua-Spark, a Netherlands-based sustainable aquaculture fund that has attracted $148 million from 190 investors across 29 countries. They include ImpactAssets, a Bethesda, Maryland–based donor-advised fund (it enables individuals to park their contributions in profit-making impact investments before ultimately distributing the money to operating charities) and the Louis Dreyfus Company, the commodities giant controlled by billionaire Margarita Louis-Dreyfus. Novogratz herself has notable connections. Older sister Jacqueline is founder and CEO of pioneering impact-investing venture fund Acumen and is married to TED Talks head Chris Anderson. Big brother Michael is a former billionaire macro hedge-fund trader turned prominent crypto investor.

This past June, Aqua-Spark’s holdings in 19 portfolio companies were valued at $180 million. In 2019, it posted a net internal rate of return (IRR) of 21.75 percent—impressive, especially given that that’s net of the 1 percent annual fee and 20 percent of gains that go to a for-profit management company 60 percent owned by Novogratz and Velings. (The couple’s foundation and employees own the other 40 percent.) Despite the pandemic, Novogratz expects an IRR this year in excess of 20 percent. (Accredited US investors can buy into the fund with a minimum investment of $118,000.)

In simple dollar terms, Aqua-Spark is a minnow in the $265 billion worldwide aquaculture industry, which now supplies more than half of all seafood produced for human consumption. Yet as the first and largest investing fund in the world dedicated exclusively to environmentally sound aquaculture, it is having an outsized influence.

For example, in 2015, in its first investment, Aqua-Spark poured $3.4 million into Calysta, a Silicon Valley startup that makes a novel fishmeal. Calysta uses fermented microbes, derived from a byproduct of manufacturing natural gas, to create fish feed that is better for the environment than fish- or soy-based versions on the market. Aqua-Spark’s money helped pay for a pilot plant which in turn helped Calysta attract $150 million in additional investment, including from Cargill and BP Ventures. It’s now building a factory in China designed to produce 20,000 tonnes of feed a year—a potential game changer for the $40 billion global fish-feed market. “When I met [Novogratz and Velings], I said it could take 10 years,” recalls Calysta co-founder and CEO Alan Shaw. “They really do trust.”

With its in-it-for-the-long-haul approach, Aqua-Spark has yet to sell a single holding. It expects companies in its portfolio to pay all employees a living wage and to prioritise transparency for scientific results. Several of its investments are in farms, which must minimise antibiotics and chemical use and limit polluting discharge.

Aquaculture “was seen as a very dirty, disease-ridden industry. They’ve shifted the mindset on it and made it investible,” says Lisa Kleissner, a prominent impact investor who sits on Aqua-Spark’s board.

Novogratz is the sixth of seven siblings whose US Army colonel dad expected them to be up by 6 am on weekends. After studying theatre at New York University, she did a stint in Washington, DC, researching policies affecting teenage mothers, then went to work with her brother-in-law, heading up the TED Prize, the annual award given to an individual behind a single change-the-world idea. That’s how, in the spring of 2010, Novogratz found herself on a research ship in the Galápagos for a trip mixing ocean-conservation lectures and scuba diving. On that trip she met Velings, a Dutch serial entrepreneur who started his first business at age 18.

Their relationship blossomed over the next seven months, but then Novogratz started having worrisome seizures. By October, she had received her brain tumour diagnosis. After the surgery, Velings proposed at her hospital bedside. She accepted but said she needed time to get her life back—she had to learn to walk again. Within a few months, Novogratz was back working at TED. “It was way too early,’’ she admits now. “I didn’t know how to stop pushing. It was my identity.” Finally, she says, a TEDx conference scheduled for Doha, Qatar, made her take a step away. “I couldn’t even walk on sand, and I had agreed to lead workshops in a desert. It was nuts.” She bought a ticket to the Netherlands, where she and Velings started to build a life and company together.

The duo picked aquaculture because few investors cared about this big and troubled market. Some fish farms were compounding the problem of overfishing in the wild by using wild fish as feed. More sustainable farming operations, to the extent they existed, “were selling to really small upscale markets at a premium” and had little access to outside capital, Novogratz says. They had met with dozens of potential investors in Silicon Valley and Europe and were eyeing a September 2013 formal fundraising launch when tragedy struck again. Novogratz gave birth to their first child in July 2013, and the infant died just a month later. The launch was postponed—but not for long. By the end of 2014, Novogratz had given birth to a second child (she and Velings now have three healthy kids), and the couple had commitments for more than $8 million from 26 investors. They covered initial operating costs with $4 million of their own money.

The two of them aim eventually to have 60 to 80 companies in the Aqua-Spark portfolio, more than three times their current roster. Early on, they worried there might not be a big enough pipeline of investable businesses; now they’re actively tracking at least 1,550.

Despite her disabilities, Novogratz has thrown herself into searching out prospects, climbing down boat ladders in Vietnam and walking on feeding platforms above crocodile-infested waters in Mozambique: “Sometimes I back away, but mostly I push myself through it.”

Although the pandemic currently prevents them from making such on-site visits, Novogratz and Velings are undeterred, doing their due diligence remotely. “Everything that is behind us is pushing us forward,’’ she says.

Tweets by @forbes_india
India Vs Australia: How the two teams stack up
Their Teeth Fell Out. Was It Another COVID-19 Consequence?