Samosa Party and its QSR gambit

Amit Nanwani and Diksha Pande used only one ingredient to make a brand out of a humble samosa: Passion. How big can the party be? 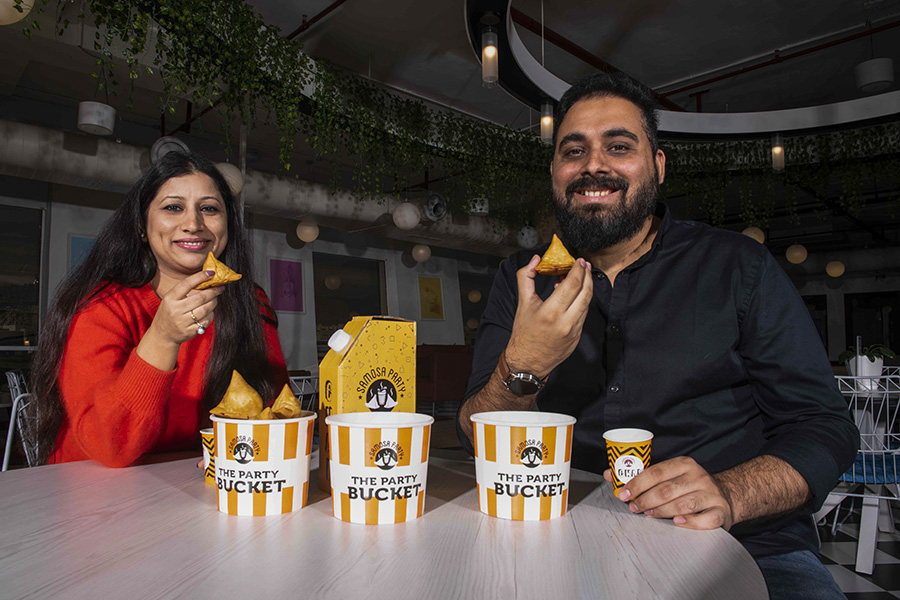 What can Intel employees have on top of their mind? The obvious answer would be chip. Right? But Amit Nanwani was programmed differently. The BTech grad had samosas! Born and brought up in the snack city of India, Nanwani has had tech stints at SapientNitro and Digitas before joining Intel in May 2015. Two years later, while Nanwani was still into his third job with the software giant in Bengaluru, he opened a small samosa outlet—Samosa Party—at Jeevan Bhima Nagar in February 2017 to satiate his samosa pangs. “I yearned for samosa all these years,” he recalls.

The foodie, who had worked at Gurugram and Mumbai before moving to Bengaluru, found himself perpetually gripped with the nostalgia for samosas. From small eateries to roadside food carts or even fancy cafes, nobody could even remotely come close to the product he consumed during his growing years. “What I encountered was either unhygienic or soggy samosa,” he laments. Stuffed, fried, crispy, fresh, hygienic and tasty… samosas haunted him.

Finally, Nanwani yielded. “Samosa Party started out of my passion,” he says. Well, the party used to start at night. The techie’s long day would typically start at 8.30 am, and after 12 hours, he would do a two-hour gruelling night shift at his samosa outlet from 8.30 pm. The pilot had a big-bang beginning. Nanwani used to sell 200 samosas per day. Apart from brisk sales, the business hours meant gathering of friends, tea, and yes, a mouthful of samosas. 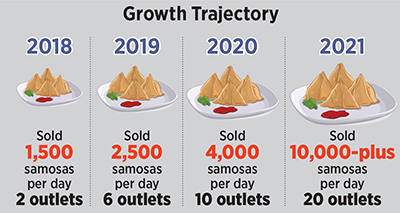 In a year, Samosa Party started selling 400 pieces a day. In May 2018, Nanwani joined EY, but continued with his passion project which now had one more outlet in Bengaluru. “It was not business for me,” he says. Coming from a business background, his passion project found ready acceptance from his parents, and even the idea of taking it up a full-time whenever the lad was ready. “Samosa Party was still a passion for me,” he underlines.

A year later, in December 2019, it was time for Diksha Pande to follow her passion. After working for 10 years at Oberoi and two years at Pizza Hut as head of innovation, the food and beverage official now wanted to give a new name to QSR—Quick Samosa Restaurant. 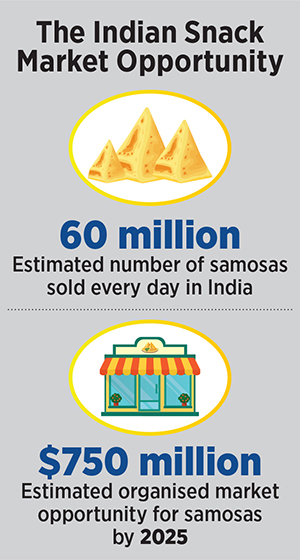 The task, though, was not easy. She had to get the buy-in from her parents. One balmy Sunday evening, she took her parents to one of the Samosa Party outlets in Bengaluru. “It’s good,” the parents commented on the product. Little did they know that their daughter would seize the moment to spill the beans. “I am joining this startup as a co-founder,” Pande broke the news. Shocked, her parents blankly stared at her. “You want to leave you job to sell samosas?” they asked. Pande nodded gingerly.

Pande’s parents were not alone to gape in disbelief. For most people, samosas are samosas, just a product made out of potato. Pande, though, knew a brand could be made out of samosa. “All it needed was passion,” says Pande, who joined Samosa Party in December 2019. Meanwhile, five months before, in May, Nanwani too had quit his job to build a business out of his passion. “Over six crore samosas are sold every day in India,” he says. “And nobody thought of building a brand.”

Cut to April last year. Vamshi Krishna Reddy knew he had stumbled upon a massive opportunity. Nearly 60 percent of India’s food services market is unorganised: Comprising a $40 billion street food market. “Samosas are India’s favourite tea-time snack,” contended the partner at Kalaari Capital as he grabbed a few from a bucket of samosas lying on his table. “Samosa are likely to represent a $750 million organised market opportunity in India by 2025,” the VC shared the nugget with his team. Eight months later, last December, Samosa Party raised $2 million in its Pre-Series A funding round from Kalaari. “Samosa Party has built an endearing brand on the back of great products,” he says.

For Nanwani and Pande, the journey has indeed been a party of sorts. The duo sold 35 lakh samosas last year. From 200 samosas per day in 2017 to over 10,000 per day now; from one outlet in 2017 to 20 now across Bengaluru and Gurugram, the co-founders are now setting an ambitious target for Samosa Party: 1,000 outlets across 10 cities and a Rs1,000 crore in revenue by 2025. “We are doing close to Rs1.2 crore in revenue a month, which makes it Rs15 crore in annual run rate,” says Nanwani. “We want to be known as samosa experts.”

Meanwhile, food experts have given a thumbs up to the effort to build a brand out of the ubiquitous samosa. “Samosa is the most popular Indian dish, more than even the tandoori dishes,” reckons KS Narayanan, a food and beverage expert. It is a treat for all seasons, has mass appeal across all spectrum of population in India and abroad, and this virtually unorganised leader of the snack market badly needed a modern makeover. “In the Southeast Asian markets, the momo sheets is a billion dollar business and in India it could potentially be the samosa patti,” he says.

The challenge, though, could be maintaining consistency in taste. “If water and egg roll can be branded, then why not samosas?” asks Ashita Aggarwal, marketing professor at SP Jain Institute of Management and Research. A big hurdle could interestingly be consistency. A country where food palate differs after a few kilometres, can having a samosa that tastes the same be the ideal thing to have? she asks. The beauty of street food and many local Indian snacks, she underlines, is the difference in taste across the country. “Can one country, one samosa work out?” she adds.

The co-founders, on their part, are confident that the gambit would pay off. And why not? Going by the numbers churned out by the desi QSR player, the party might just have started.