Convincing 1.3 billion people to add a staple of East Asian cuisine to their butter chicken and samosas is no cakewalk 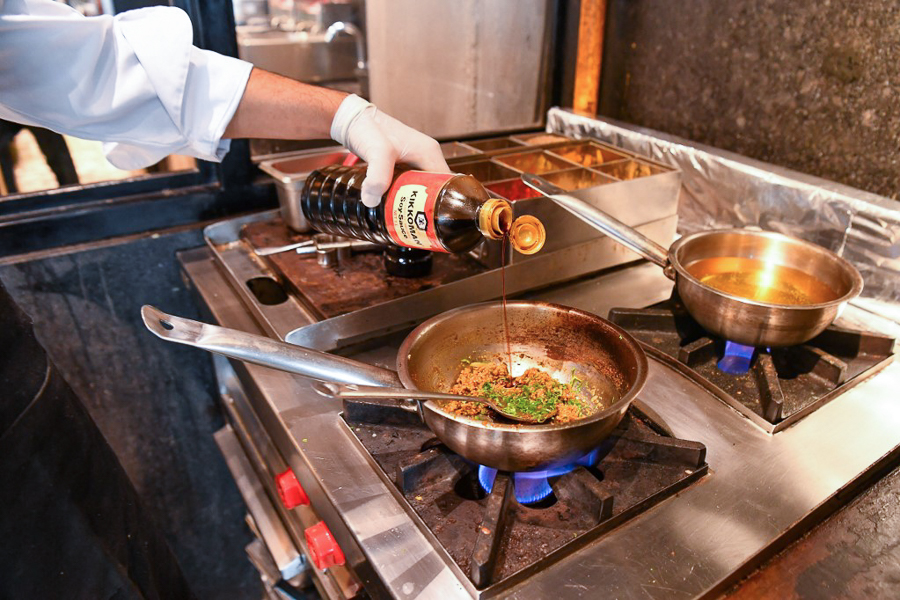 In this picture taken on July 16, 2021 a chef prepares a samosa filling with mince meat with Kikkoman Soy Sauce at the Ishaara restaurant in Mumbai.
Image: Indranil Mukherjee / AFP

Every dish tastes better with a dash of soy sauce, even dessert: that's the ambitious pitch of Japanese food giant Kikkoman, hoping to persuade Indians to use it in curries, sweets and everything in between.

Convincing 1.3 billion people to add a staple of East Asian cuisine to their butter chicken and samosas is no cakewalk but it will likely be easier than the brand's 1960s push into the United States.

"When we entered the US, people thought we were selling bug juice because of its dark colour," Harry Hakuei Kosato, Kikkoman's India representative, told AFP.

Today the brand's funnel-shaped dispenser is a ubiquitous presence in US households, accounting for half of the firm's $4.4 billion revenues, and Kikkoman now hopes to replicate that success in India.

Sales were boosted by the West's growing craze for Japanese cuisine since the 1980s, but the company is taking a different approach to India, which is home to a significant vegetarian population.

"It is not about getting everyone to eat sushi. We want our soy sauce to become the ketchup of India," said Kosato.

He hopes that the move to market the sauce as an endlessly adaptable condiment will strike a chord in a country where culinary innovation is part of street food culture.

So it is perhaps unsurprising that some Indian chefs began using soy sauce in their dishes long before Kikkoman launched in the country earlier this year.

Since then he has added a dash of soy sauce to a range of local dishes, from samosas to lamb keema.

"When I tried it with keema pao, it was just like 'oh my god'. It was an explosion of flavours," Issar told AFP.

"It has this indefinable umami flavour, this tart, sharp quality you can't find anywhere else," he explained, describing it as "a bit of a chef's secret".

Kikkoman is now trying to get the word out to ordinary Indians and counting on social media influencers like Shalini Kapoor to drum up an appetite for its product.

For Kapoor, a home chef who never liked the "synthetic" taste of locally-available soy sauces and couldn't imagine using the condiment in Indian food, the results have been revelatory.

She has even used it to make jalebis—a deep-fried pretzel soaked in sugar syrup.

"I think it's amazing in Indian desserts," she told AFP.

But it might take the rest of India more time to catch up to the idea, she acknowledged.

"They just need to get a taste of it."