The rise of European-style breads in the Indian household

From the humble sourdough to flakey croissants, European-style breads have gone mainstream in urban India, thanks to a growing bunch of bakers, and a push from the Covid-19 pandemic 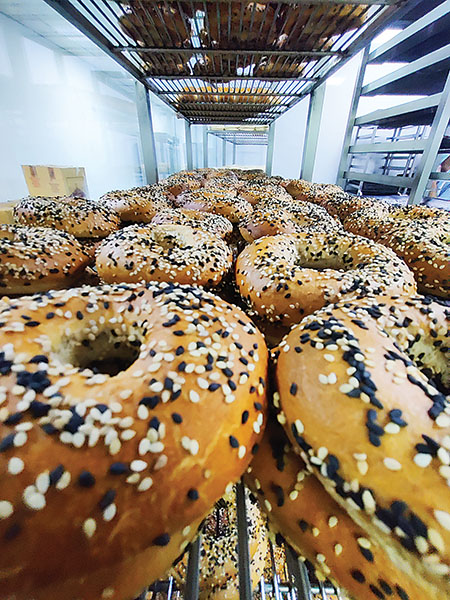 Bagels from The Baker’s Dozen, a bakery co-founded by Aditi Handa

Not too long ago, authentic European-style breads were available only within the confines of cafes and restaurants of five-star hotels. Outside of them, bagels were often nothing more than ring-shaped, soft, white bread, while croissants were crescent-shaped versions of the same thing. Urban India, accustomed to consuming various forms of commercial, white bread for several decades, was yet to get a taste of, let alone develop a liking for, European breads each of which comes with its distinct flavours, crusts, textures and characteristics.

In the last few years, however, thanks to the enthusiasm and efforts of a growing bunch of bakers, European style breads have become more mainstream than they ever were, becoming available in multiple cities, cafes and restaurants, grocery stores and online delivery platforms, and even delivered to your doorstep. So now, a bagel is not light and fluffy any more, but dense, moist and chewy, like it is supposed to be, and croissants are light and flaky, with layer upon layer of buttery goodness. And then, of course, is the sourdough, which has emerged as the unlikely hero in a year plagued by Covid-19.

“When we started the bakery we made a decision to not have a bakery and patisserie together and instead focus only on breads, even though cakes is where you make the money,” says Aditi Handa, head baker and co-founder of The Baker’s Dozen, who started her journey as a baker with one outlet in Mumbai’s Prabhadevi neighbourhood in 2013. “A lot of people told us, ‘How much bread will you sell? How will you make a sustainable business out of it?’ But when you have fallen in love, whether it is with a boy or bread, nothing else seems to matter.” 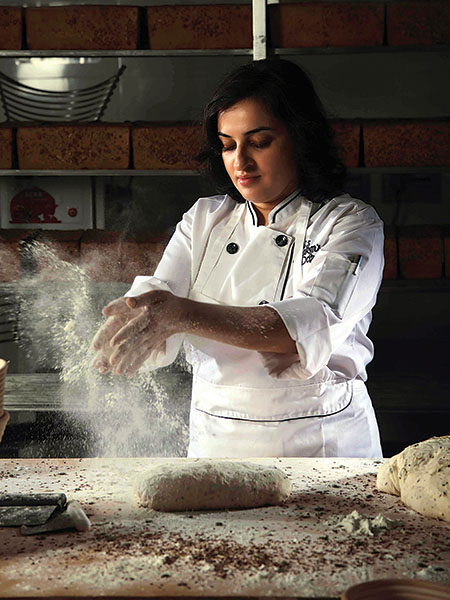 Despite cakes bringing in the money for bakeries, Handa decided to stick to breads and is now reaping benefits

The beginning was not easy either, with clients not accustomed to an entirely new range of flavours and textures. “I think my sales team hated me, and would keep telling me that no one wants to eat the bagels I made,” she laughs. “But I insisted on boiling the bagels, as they should be, and eventually it has paid off.”

From the single outlet in Prabhadevi, The Baker’s Dozen has grown to three branded stores in Mumbai and 21 delivery outlets pan-India, and plans to expand to 50 stores across 15 cities by the end of 2021. With a massive scale-up in demand, manufacturing moved from its initial unit in Mumbai’s Wadala neighbourhood, to a larger space in Navi Mumbai, and finally to a 25,000 sq ft unit outside Ahmedabad. It is no surprise that revenues too have kept pace with this growth, rising from ₹6 crore in 2018-19 to an expected ₹20 crore in 2020-21.

From the Navi Mumbai unit, Handa started supplying to Pune, and then to Bengaluru. “We wanted to keep our processes artisanal, but at the same time, scale it up, which is a difficult proposition. So we wanted to have a central manufacturing facility, as well as improve the shelf life of the products so that they could be transported to different cities,” says Handa. “Since we don’t use preservatives, we turned to using ‘modified atmosphere packaging’, which is similar to how products like paneer are packaged.”

This form of packaging is not used to package bread in India because it is quite an expensive affair, and adds ₹10 to ₹12 per package, she adds. “But we realised our consumers are very quality-driven and would not mind that extra cost.” 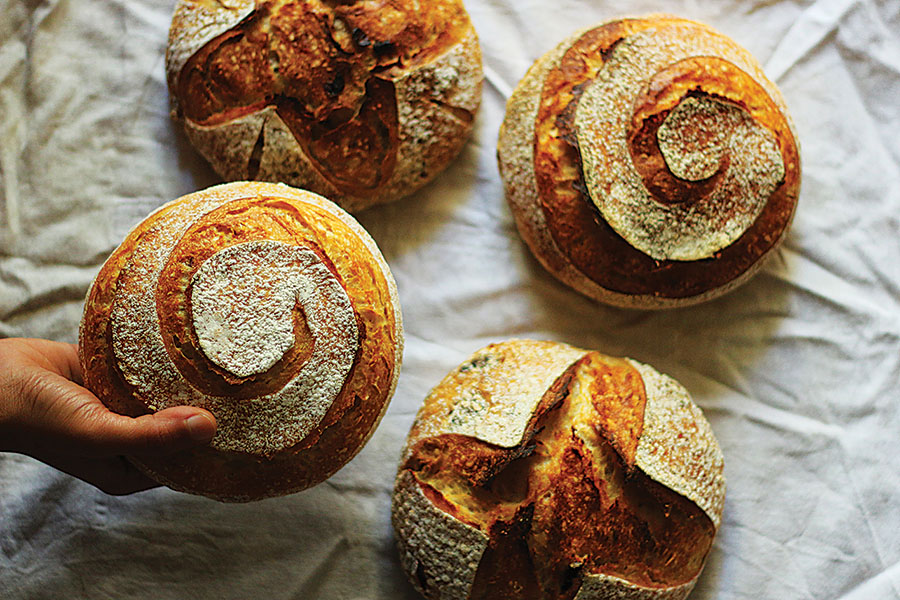 Facing a similar conundrum with clients was Suchali Jain, who started Suchali’s Artisan Bakehouse in Gurugram in 2017. “Initially, when we started baking sourdough breads, consumers complained about the crust being hard and the bread being nearly impossible to consume. There were complaints about its sour taste,” she recalls. “But by 2019, we saw more acceptance for this bread. 2020 was a year where everyone wanted to have just sourdough bread. In fact, during the initial 10 to 15 days of the lockdown, when we were unable to operate our bakery, we got regular calls and emails from our customers requesting us to supply them with bread as it was their staple. That made us realise the level of acceptance of this bread in the market.”

Jain moved her bakery to a bigger space four months back to be able to cater to the current increasing volumes, and meet future demand. “We are also considering expanding our operations to another metro city by this year,” she adds. Jain started with baking once a week in 2017, followed by daily production by the end of that year. “Now we have a 24-hour production model to support our demand and growth plans. Since the start of our venture, we have seen nearly a 100 percent year-on-year growth.” 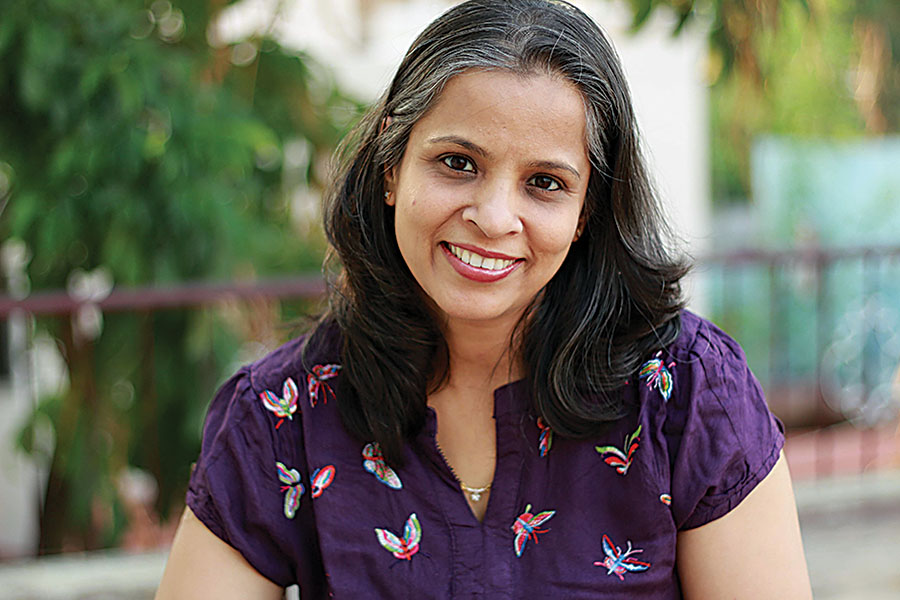 Samruddhi Nayak, the founder of Krumb Kraft in Bengaluru, which specialises in sourdough breads

Also expanding operations is Samruddhi Nayak, founder of Krumb Kraft in Bengaluru, which specialises in sourdough breads. “I started with baking at home, making two breads a week,” says Nayak, who first conducted classes at home in 2015, before launching her enterprise in 2017. Starting out alone, she subsequently recruited her husband, and brother and moved to a 2,000 sq ft space to bake. “We will soon be shifting to a 3,000 sq ft space, because I need a separate space for our gluten-free products, and I am also conducting my classes.” On an average, in a week, Krumb Kraft makes between 200 and 300 sourdough breads for selling directly to individual customers; this apart, it also supplies breads to cafes and restaurants.

Finding an increasing demand for gourmet breads is not just bakeries such Handa’s, Jain’s or Nayak’s, but even an enterprise as mainstream as BigBasket. “We had launched our Fresho brand of breads in 2013, but by 2015, our customers began asking for gourmet breads, as they became more familiar with baguettes and bagels,” says Seshu Kumar Tirumala, national head, buying and merchandising, BigBasket. “We did a market survey, and in early 2015, we launched our Signature range of gourmet breads.”

Of the 30 cities in which BigBasket services are available, the company supplies gourmet breads in eight to nine. In these cities, BigBasket ties up with a local baker, who is then trained to make gourmet breads. “Breads have a short shelf life, and customers often don’t find fresh products in local stores. If our breads are more than three days old, we return them to the manufacturers,” he adds.

The Signature range of gourmet breads saw sales touch ₹2 crore a month during the lockdown months of July and August. “This happened because a lot of local bakeries were closed. After this period, the sales stabilised to about ₹1-1.5 crore a month, which is still double of what the sales were before the pandemic,” says Tirumala.

Adapting European Breads to India
Recalling her training in European baking at the Akademie Deutsches Bäckerhandwerk Weinheim in Germany in 2016, Nayak talks about the challenges of adapting the ingredients and techniques of European bread-making to Indian conditions. “In Germany, there are different kinds of grains and flour, such as spelt or dinkel, emmer, rye and weizen. They all taste different, and give the bread different kinds of properties. But in India you only get one kind of wheat and flour. So we have to innovate,” she says. So, for instance, there is ‘Vollkorn’, which is Nayak’s version of rye bread, but made with 100 percent whole wheat; or ragi and sesame sourdough.

Handa says when they started The Baker’s Dozen, they decided not to import any raw material, “because that is how a true chef is tested”, and also because of cost factors. “No one would buy a sourdough bread if it costs ₹500,” she says. “The first thing we accepted is that the sourdough we would make in India is going to be very good, probably one of the best you get in the country, but it will probably not be as good as the one you get in France.”

For croissants, which needs butter to be in a cold and solid state, Handa uses an extra-dry variety that does not melt as fast as regular butter. “Even then, we make the croissants in a room that is kept at 19°C, and if we see the butter is melting too quickly, we fold it and put it in the chiller for 5-15 minutes.”

When it came to things like proofing, product consistency would always be a problem. Handa, therefore, invested in a proofing machine so that consistency could be maintained at all times, regardless of seasonal changes. “We invested in European equipment, which are much more reliable and consistent compared to Indian and Chinese ones,” she says.

Like all the other cuisines that India has adapted and made its own, it is perhaps now time for European style breads too to find their footing and fan following.