Prataap Snacks, to Delhi and beyond: Catapulting to a Rs 1,000-crore brand

Prataap Snacks started in a 100 sq ft room, and its founders sensed an opportunity in entering the big FMCG race by entering the national capital first. Can it knock down the big boys? 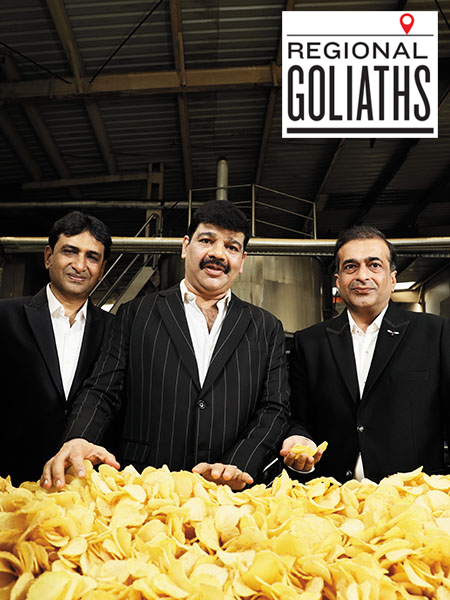 
It was a question of 866 km versus 35 km. The preferred option, and the easiest one, for Amit Kumat would have been Mhow, a cantonment area, some 25 km from his production unit in Indore. Kumat, however, opted for a destination 866 km away—Delhi—to sell his brand of cheese balls and fried flatbread under Yellow Diamond, the flagship brand of Prakash Snacks, in 2004.

For the man with a master’s degree in science from the University of Southwestern Louisiana, US, there was a method in the choice of the national capital: The per carton freight cost to Mhow was higher than that of ferrying goods to Delhi. “It was a no-brainer,” recalls Kumat, who had run three failed ventures for six years before teaming up with his brother Apoorva and friend Arvind Mehta to start Prakash Snacks from a 100 square-feet room in Indore in 2004. The street-smart entrepreneur spotted an opportunity in long trailer trucks carrying Maruti and Hyundai cars from Delhi to Indore. The trucks, Kumat noticed, would go back to Delhi empty. In a win-win for the drivers and Kumat, the entrepreneur loaded the truck with his cartons of snacks. In one go, a local brand from Indore was catapulted to the national capital where it started rubbing shoulders with much bigger rivals such as PepsiCo, Haldiram’s, ITC and DFM Foods (of Crax fame).

Coming to Delhi, though, was the easy part. Surviving in the national capital over the next few years was not. Deep-pocketed rivals with wide distribution power muscled out the fledgling brand, which was getting products made from a third party in Lucknow and Bhopal. In 2006, Kumat took control of the production and launched a potato chips unit in Indore. A year later, the trio started Prataap Snacks, and the old company Prakash got merged with it.

Meanwhile in Delhi, the chips were still down for Kumat and Yellow Diamond. Prataap couldn’t match the rivals in terms of advertising and retail footprint; and its chips and random extruded snacks under the brand Chulbule—a lookalike of PepsiCo’s Kurkure—was not gaining traction. There was only one way to survive. “You need to be different from others,” says Kumat, the managing director and CEO of Prataap Snacks.

To take on the heavyweights, He started punching much above his weight. He loaded his ₹5 pack with more chips—30 gm—compared to 22 gm offered by the rivals. Besides, while keeping his focus intact on Delhi, he started moving deep into Haryana. The gambit worked. Consumers lapped up the brand and Prataap Snacks started to establish itself in north India.

Now it was the turn of the West. Buoyed by the initial success in Delhi and Haryana, Kumat advertised for the first time in 2007. It was not a product commercial, though. The print ad in a leading national daily—Kumat shelled out ₹5 lakh for it—was to seek distributors and super-stockists in Pune. Kumat expected hundreds of applications, but got only one from Pune. But the applicant, it turned out, neither had money to buy goods nor a place to stock products. He stayed in a small room close to the railway station, had recently quit his marketing job and wanted to get into distribution. Kumat took a leap of faith.

The bold bet again paid off. Prataap made a promising entry into Pune and Mumbai; the brand grew at a decent pace overall and reached ₹172 crore in revenue by FY12; and Sequoia invested in the company. The success whetted the appetite of Kumat who now thought of doing something adventurous: Moving outside the cluttered wafers market, and taking on the market leader in Delhi in the rings category, DFM’s Crax. The plan bombed. Reason: In the ₹5 pack, Prataap had inserted a small toy for kids. There were few takers. Disappointed, Kumat sent all the stock—100 cartons—to his distributor in Assam, with one message: Sell if you can, else burn the stock.

As luck would have it, Assam made Prataap lord of the rings. The demand was so massive that Prataap had to set up two manufacturing plants in consecutive years. Kumat now started advertising on kids’ channels across India, including Delhi. The kids loved the product, and the toys. There was no turning back for Prataap, which roped in Salman Khan as brand ambassador in 2016; it got listed the next year, closed FY20 with revenue of ₹1,393 crore, and now gets 35 percent of sales from rings, making it the biggest player in an estimated ₹1,000-crore category. “We are the biggest toy consumer in India,” smiles Kumat.

He is not kidding. Prataap sells around 40 lakh packs of rings every day and has a separate division designing toys for kids. The company gets 50 percent of its sales from five states—Delhi, Haryana, Maharashtra, West Bengal and Madhya Pradesh—and 15% from South India (see graphics).

GV Ravishankar, managing director at Sequoia India, explains the magic of regional giants like Prataap. Superior understanding of regional preferences and the ability to tailor products to the primary consumer base have led to certain brands faring better in certain parts of the country. Take, for instance, spice brands, which have seen regional dominance because Indians tend to have varied palates depending on location. “This effect may be slightly subtle when it comes to personal care products,” he says. But even there, Ravishankar lets on, ingredients like turmeric and sandalwood may be more popular in the south.

Launching sharp local media campaigns has also worked for regional brands. They are able to target consumers through focussed campaigns as compared to 15-20 years ago, when there were no regional channels of scale to make this a viable option. Sun TV, for example, created a significant dent in the south, and local brands could choose to focus their TV campaigns only on Tamil Nadu if they wished, points out Ravishankar. These channels are also more affordable than English or Hindi, and led to several regional brands successfully marketing and scaling their businesses to a local consumer base. “Stronger consumer awareness and targeting has subsequently led to deeper consumption markets aided by better purchasing power,” he adds. Back in Indore, Kumat contends that a deeper consumption market happened by design, not by default. The strategy to go deep into one state, make it a stronghold and then move to the neighbouring region had worked for the brand. So did the plan to have a slew of innovative products. “You can’t play price warrior anymore. You need to have more differentiated products,” he says. The move came handy during the pandemic year.

For a company, which gets a significant portion of its sales from the ₹5 pack—an impulse category—2020 was turning out to be a horror year. The bestseller was out of action, sales of rings and chips tanked, and the company was staring at hard times. There was a silver lining, though: Take-home packs of namkeens. The smallest performer in the class—Prataap gets just 9 percent of revenue from salted snacks (namkeens)—turned out to be the shining star. There was a learning as well. Kumat started making more take-home packs and aggressively pushed the production of namkeens. More steps were taken to cut production, distribution and transportation costs. Oil content was slashed, cartons were redesigned to squeeze in more, and labour cost was rationalised. “Crisis teaches you more,” he says.

Kumat had a big learning even during normal times too. In 2016, Prataap launched sweet snacks. The idea was to use the same retailer network to push the new product—a layered cake with gems and choclolate—but it died a premature death. Reason: Shopkeepers used to hang the packs outside the shop, and the product used to melt in the heat. After two years, Prataap pulled the plug.

Fast forward to 2021. Kumat is again trying to make a dent in the sweet market with cupcakes and sandwich cakes. Will he finally find his sweetheart? “We live up to our brand philosophy: Dildar hain hum (we are big-hearted),” he smiles.