The apparel maker has grown by fanning out across tier III cities and beyond in north and west India, doling out heavy discounts to attract customers 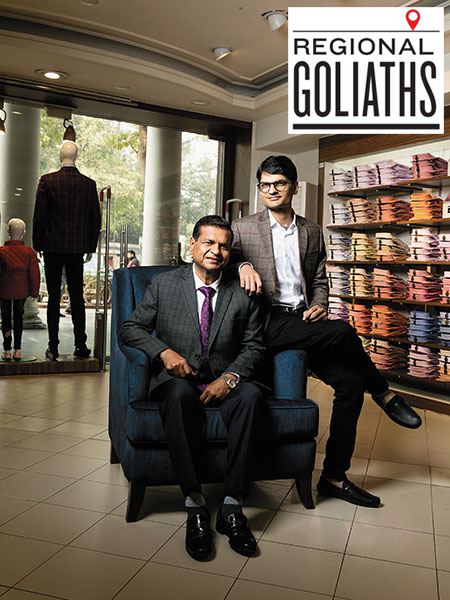 
Vijay Bansal rolled up his sleeves in 2006 and got down to tackle the looming threat. The founder of Cantabil had little choice, thanks to the frightening pace of the growth of Koutons, a rival apparel brand in Delhi. Bansal opened the first outlet for his menswear brand Cantabil in 2000, and it grew at a sedate pace over the next five years, to touch ₹10.4 crore revenue, profit after tax of ₹8 lakh and 25 stores by FY05. Cantabil, Bansal explains, was launched to provide value-for-money products to consumers who wanted an ‘aspirational’ brand without burning a hole in their pocket. In order to live up to the billing, Cantabil was positioned as an ‘Italian international clothing’ brand, outlets were opened only at prime locations in Delhi, and products were sold at MRP (maximum retail price). Everything was going according to plan. Till the competition came calling.

Rival Koutons ramped up at a furious pace. Revenues jumped from ₹58.1 crore in FY05 to ₹403.6 crore in two years. The number of exclusive brand outlets during the same period leapfrogged from low single digits to close to 1,000. The growth came on the back of two factors. One, Koutons had positioned itself as a ‘knock off’ brand. At times, the discount was as high as 80 percent. Two, over 95 percent of the stores were owned by its franchise partners. Bansal was left with little choice. He had to fight fire with fire, and discount with discount. “We never wanted Cantabil to be a discount brand,” recalls the chairman and managing director of Cantabil Retail.

The results of hopping onto the discount bandwagon, though, were encouraging. In four years, Cantabil had grown to ₹137 crore (FY09), and opened 300 outlets. Next year, it added 140 outlets. Meanwhile, Koutons, which got listed in 2007, was fast slipping into trouble. In 2010, the year Cantabil got listed on the bourses, analysts pressed the alarm button as Koutons slipped into self-destructive mode. While the debt mounted six-fold—some estimates reportedly put it at ₹1,300 crore—inventory too piled up. A year later, the discount retailer went for corporate debt restructuring. Brutally cut to size, Koutons finally paid a price for its hyper-aggressive growth. A couple of other Koutons-lookalikes too disappeared over the next few years.

A decade later, Cantabil is having the last laugh. The discount apparel retailer posted revenue of ₹338.04 crore, a PAT of ₹22.88 crore, and had a store count of 301 in FY20. The brand survived, and so did the ‘discount’ tag, albeit in a diluted manner. “Heavy discounts like 80 percent are a thing of the past,” quips Bansal. The brand now offers low discounts apart from regular ‘end of the season’ sales. “I don’t mind the discount tag,” he says.

“ We graduated from a local player to a regional major.”
Vijay Bansal, chairman and managing director, Cantabil Retail

Neither do Indian consumers. A boom in ecommerce, largely driven on the back of hefty discounts by etailers, has whetted the appetite of consumers. Discount is no longer a dirty word.

There’s another label that Bansal wears as a badge of honour: That of a strong regional player. “We graduated from being a local player to a regional major,” he says. Five states—Delhi-NCR, UP, Rajasthan, Maharashtra and Haryana—are the biggest money-spinners for the brand. While 64 percent of revenue comes from the north, 29 percent is the contribution of west, and 3 percent each comes from central and south India.

Cantabil’s emergence as a strong regional player, point out brand experts, is largely because of four reasons. First, the name is aspirational, reflecting international appeal. Second, it has a wide range of formal wear, semi-formal wear, casuals, ultra-casuals and party wear, attracting men, women and kids. Third, despite an upscale look and feel, the brand is reasonably priced, leading to vibrant trials. And last, its reach across tier III and beyond helped it meet the unmet aspiration of consumers yearning for good quality at an affordable tag.

“A regional brand with an international image has led to great mindshare and market share,” says Jagdeep Kapoor, chairman and managing director at Samsika Marketing Consultants.

Take, for instance, V-Mart Retail. “Focus on offering affordable fashion, along with providing a modern retail experience, is helping it win in Real Bharat,” Euromonitor pointed out in its report titled ‘Regional brands in India drive the Bharat (non-metro) consumption.’ The reasons are not hard to find. V-Mart is strategically present only in tier two and tier three cities across northern and eastern states of India, which have a high population density. The price points offered are at least 30-50 percent lower than some of the national department store chains. “This strategy connected well with consumers in tier II and III cities whose disposable income is almost half that of consumers in tier I,” the study underlines.

Back in Delhi, Deepak Bansal, the second-generation entrepreneur who has aggressively moved Cantabil into tier III and beyond over the last six years, is pleased with the growth. “The real consumption story is happening in Bharat,” he says. 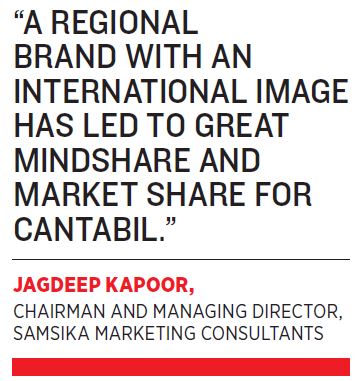 Though the brand started with Delhi and survived fierce competition in the city, the big market was always outside the top cities. “For any brand that doesn’t cut corners on quality, the headroom to grow is always massive,” contends the director at Cantabil Retail.

Senior Bansal chips in. “Growth has to be sustainable as well. That’s the most crucial thing,” he says. The priceless learning comes from a bitter experience. In the heady days of discount wars, Bansal started another brand—La Fanso—to take on his rivals in 2008. Over the next two years, the brand furiously ramped up its presence: 150 stores by 2010. Though sales grew, Bansal got alarmed. The business model was not sustainable, the company was burning cash, and having two menswear brands from the same stable meant cannibalisation. There was another learning. A predominantly franchisee model of business is a recipe for disaster. This is what happened with rival Koutons. Bansal smartly took his foot off the pedal, and started focusing on company-owned stores. The discount retailer now has only 81 franchisee stores out of a total tally of 301.

What next for the discount king? “We need to take the brand deeper into the hinterland,” says Bansal. While offline will expand, the big focus will be on ecommerce, a learning from the pandemic year. “The growth will keep coming, but not at the cost of discounting basics,” he says.

Tweets by @forbesindia
Photo of the Day: One for the team
Yusra Mardini: From war-torn Syria to the Olympics—redefining the concept of winning