Signs and Symptoms of Psoriasis

Dr Nihar Rajan Kayal, interesting insights on Psoriasis & its effects on life of normal person also some treatment options for the psoriasis 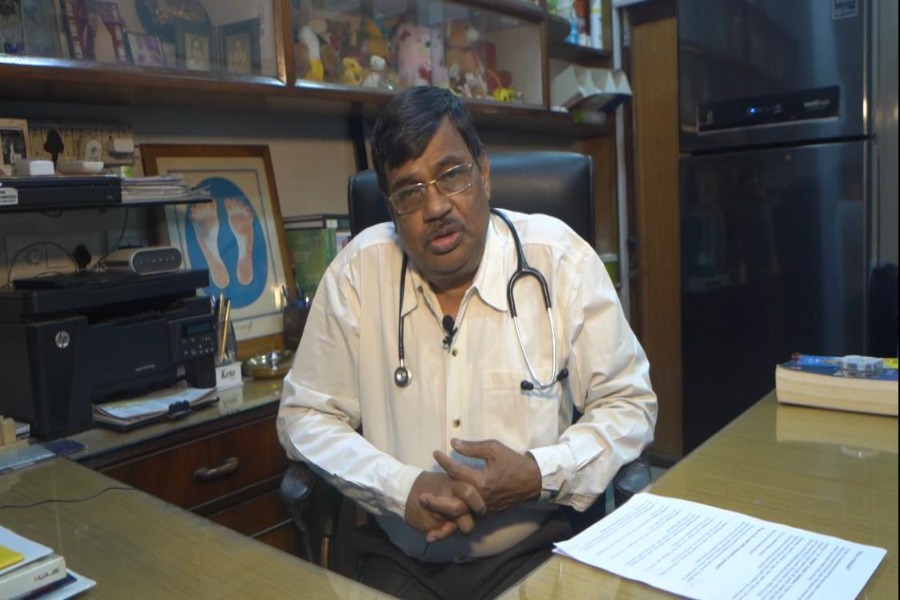 What is Psoriasis?    Psoriasis is an autoimmune disease that causes people to develop thick patches of inflamed skin covered with silvery scales. With psoriasis immune system becomes overactive and attacks healthy cells in the body.     According to the National Psoriasis Foundation, Psoriasis occurs because the overactive immune system speeds up skin cell growth. Normal skin cells completely grow and shed (fall off) in a month. With Psoriasis, skin cells do this in only three or four days. Instead of shedding, the skin cells pile up on the surface of the skin.        Inflammation caused by Psoriasis can impact other organs and tissues in the body. People with Psoriasis may also experience other health conditions. One in three people with Psoriasis may also develop psoriatic arthritis.
Issued in Public Interest by Oaknet Healthcare
What are the signs and symptoms of Psoriasis?       The most common symptom is the appearance of silver scaly patches. These patches appear on knees, elbows, scalp, trunk, buttocks, and nails. However, the disorder can affect any area of skin on the body, including the genital region.    What causes Psoriasis?  Psoriasis runs in families: If a parent, grandparent, brother, or sister has psoriasis, there are increased chances of having it. Scientists have learned that a person’s immune system and genes play a role in causing Psoriasis.   Immune system: When a person has Psoriasis, T-cells attack the body’s skin cells, causing the body to make new skin cells more often. The extra skin cells pile up on the surface of the skin, leading to psoriasis.   Genes - Scientists have found that people who have certain genes are more likely to get Psoriasis.  Common Psoriasis triggers include:  What are the treatment options for Psoriasis?      There are four categories of treatment available for people with Psoriasis: Topical creams and ointments; phototherapy (exposure to ultraviolet light), oral medications and biologics, which are drugs given by injection (shots) or intravenously. The treatment a person with psoriasis receives depends on the severity of their case and their overall health.        A trial of topical therapy is indicated as the first line of treatment in patients with less than 5% body surface area affected. For more severe disease, involving greater than 5% of the body surface, second-line options include phototherapy, oral retinoids, cyclosporine, and methotrexate. Third-line therapies, for recalcitrant disease, include a variety of systemic agents, biologics, and targeted immunotherapy   Toxicity associated with Psoriasis treatments, rotation, combination, and sequential use of therapeutic modalities may be helpful in controlling the disease while minimizing side effects. Rotational therapy involves treating Psoriasis with a systemic medication, such as methotrexate or cyclosporine, followed by switching to light therapy. Combination therapy involves mixing two or more treatments. Sequential therapy refers to the concept of treatment in which potent medications are used to clear the disease and safer, but less effective agents to maintain remission Anthralin, or dithranol, slows cellular proliferation, decreases inflammation and increases cellular differentiation in Psoriasis. The mechanism of action of corticosteroids is attributed to their anti-inflammatory, antiproliferative, immunosuppressive and vasoconstrictive properties.  Treatment with betamethasone dipropionate optimized vehicle (OV) (ointment) and clobetasol-17- propionate, has been shown to improve moderate to severe Psoriasis vulgaris by at least 75% In extensive cases of Psoriasis requiring large amounts of corticosteroids, systemic absorption can lead to suppression of the hypothalamic pituitary adrenal axis. Because of their increased skin surface: body mass ratio, infants and small children may be especially susceptible to this side effect   Which is the most common type of Psoriasis?     Plaque Psoriasis is the most common form of Psoriasis. Plaque Psoriasis tends to affect young and middle aged adults, but can occur at any age. The individual skin plaques are usually between 0.4 and 4 inches (1 to 10 cm) wide but may be larger. Some of the most common areas for plaques are the scalp, elbows, knees, and back.  The severity of plaque Psoriasis varies widely. Plaque Psoriasis may occur in just a few small areas or may cover a large portion of the body.   What Patient education tips would you suggest for Psoriasis?
The pages slugged ‘Brand Connect’ are equivalent to advertisements and are not written and produced by Forbes India journalists.

Tweets by @forbes_india
Photo of the Day: Protesting a coup
Prataap Snacks, to Delhi and beyond: Catapulting to a Rs 1,000-crore brand