Sushi newbie India is doing some things right for the sustainable seafood campaign. Here’s why it makes a difference to the oceans 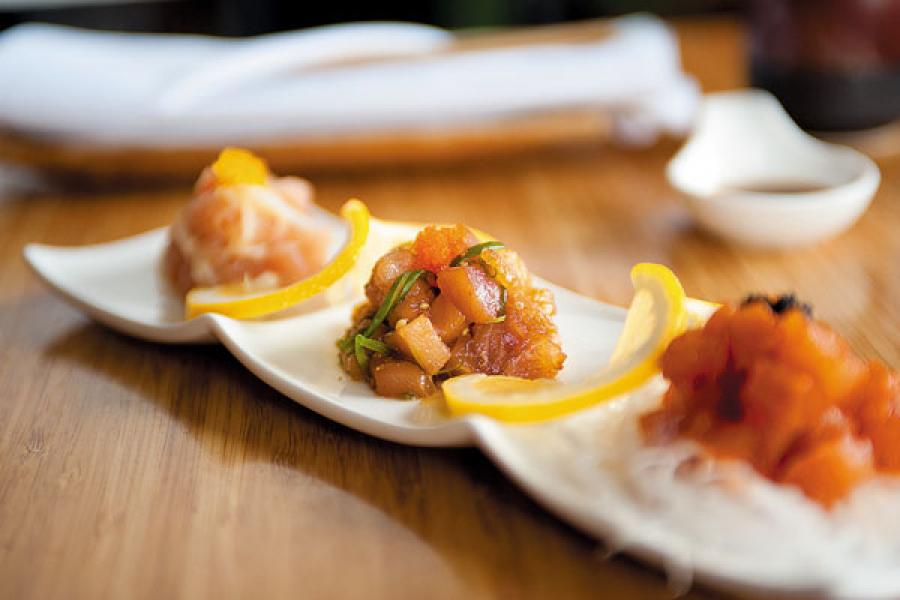 Any way you look at it, sushi is perhaps the most surprising success in urban dining menus in recent times. Till about a decade ago, few culinary experts could have predicted that Indians — who like their steaks well-done and their risottos overcooked — would take to raw fish like, well, a fish to water.

However, globalisation comes with a price, one that isn’t always covered by the dinner bill. Spiralling seafood consumption — nearly 90 million tonnes per year since the late 1980s, or roughly five times the annual catch for each year between 1950 and 1970 — has caused 29 species of fish, including several varieties hunted for sushi, such as blue-fin tuna, hamachi (Japanese amberjack), unagi (eel) and certain types of shrimp, as well as farm-raised salmon, to touch critically low levels. A 2006 report published in the research journal Science (considered the most accurate indicator of the state of oceans till date) warned that at then-current levels of consumption, there would be little or no fish left by 2048.

“The sushi industry is like a snake with its tail in its mouth,” says Casson Trenor, senior markets manager at Greenpeace and author of Sustainable Sushi, describing a business motivated by short-sighted profits at the expense of the environment. The problem is compounded by consumers who are not aware of how their seafood consumption affects the ocean’s delicate eco-systems, and industrialised fishing that covers an additional 3 million square kilometers — about the size of the Brazilian Amazonia — each year since the late 1980s, according to a 2010 report published by the University of British Columbia researchers in collaboration with the National Geographic Society.

Trenor, a longtime advocate for responsible ocean management and self-professed “seafood campaigner”, wrote Sustainable Sushi in 2008 to create awareness about the perils of unchecked seafood consumption and help sushi consumers make better choices. That same year, he set up the Tataki Sushi Bar, a San Francisco restaurant that is the world’s first 100 percent sustainable sushi outlet. It steers clear of serving fish from endangered or overfished populations, polluting fish farms, or anything caught irresponsibly, for instance, by trawlers that scoop up high levels of by-catch while scraping the ocean floor.

Rather than disadvantage the enterprise, these principles also allow Trenor to attack the “McDonaldisation of sushi”, as he likes to call it. Boosted by commercial fishing, air travel and refrigeration, the global popularity of sushi has led to a mass conformity in sushi menus, putting immense pressure on seafood species meant to be enjoyed locally and seasonally. “Hamachi, for instance, is one of the most common sushi options in the United States,” says Trenor. “But if you asked an American to draw a picture of a Japanese amberjack, he wouldn’t be able to, because the fish doesn’t come from anywhere near the US. Today, you can get the same nine-piece sushi special at any restaurant in the world. Sushi restaurants in Tokyo and Boston shouldn’t be serving the same fish.”

Chef Hajime Sato, owner and head chef at Mashiko Japanese Restaurant in Seattle, couldn’t agree more. “Even if you are a selfish person and want to eat everything, you should support sustainable sushi,” says Sato. “Otherwise, in a few years, sushi will be gone.”

A cranking 15-year establishment with a line out the door most nights of the week, Mashiko was the world’s first previously existing sushi bar to convert to a 100 percent sustainable menu in August 2009. Naturally, certain fish went off the menu, but Sato felt the conversion was a critical step, despite the financial implications. “I wanted to save my industry and save the oceans,” he says. “It’s like your friend’s dying right in front of you. Are you going to do something, or just ignore the situation? People want to make money today. But even if we do, there won’t be any fish left in five years. Are we going to serve jellyfish sushi then? Going sustainable just makes sense.”

Sato’s menu features unique specials made of locally sourced seafood, including Alaskan and Washington salmon, goeduck, a local clam, plus sardines, crabs and other shellfish. Eating local, seasonal fish is a fundamental tenant of sustainability, as it helps regulate demand on particular species and eliminates the need for fish to travel long distances by air.

It also reduces the increasing conformity of sushi menus around the world. “Today, you get the same sushi all over the world,” says Sato, echoing Trenor’s frustration. “If I go to Canada, I’d like to try Canadian sushi. When I go to India, I’d like to try Indian sushi. That’s exciting to me.”

Indian sushi, actually, could be a shot in the arm for the ailing industry, because its growing popularity has forced chefs to come up with vegetarian options and use local seafood. “People want to like sushi but they’re still trying to figure out a way to enjoy it,” says Varun Tuli, managing director of The Yum Yum Tree in New Friends Colony, New Delhi, where 50 percent of the Pan-Asian menu comprises sushi or other Japanese options. “Indian sushi is more similar to the American style than traditional Japanese, as it incorporates lots of spicy mayo dressings and wasabi. We’ve seen customers eat sushi with chilli sauce, or pickled ginger, typically used as a palate cleanser.”

One uniquely Indian option on the Yum Yum Tree menu is the asparagus tempura roll, made with tempura-battered asparagus, rice and seaweed, plus a few green chillis. “It doesn’t corrupt the sushi,” Tuli says, joking that he’s not sure if Indian customers even know why they like that signature roll.

Still, the bulk of the restaurant’s menu is non-vegetarian, including yellowfin tuna, prawns and crab caught right here in the Indian Ocean, salmon from Scotland, scallops from Canada and unagi from Vietnam and Thailand. Tuli used to get hamachi from Japan but, since the March tsunami in the islands, has started sourcing similar-tasting amberjack from Chile as a replacement. 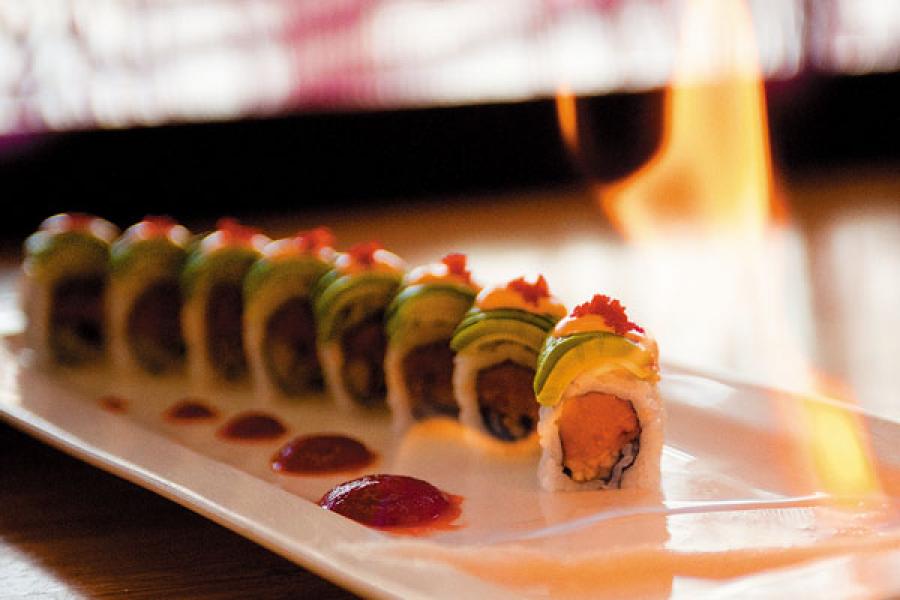 Image: Courtesy Casson Trenor
THOUGHTS TO CHEW ON Dont hesitate to ask the chef where the fi sh in your sushi comes from and how it’s raised. Also, ask for something local and seasonal
At Edo, Bangalore’s newest Japanese option, tucked inside Asia’s first LEED-certified hotel ITC Royal Gardenia, sustainability is also a theme, with house favourites such the soft-shell crab uramaki and edi tempura uramaki using local crab and prawns. Other seafood options include red snapper, cuttlefish and octopus from the Indian Ocean. Likewise, Harima, also in Bangalore, sources the majority of its seafood ­— including tuna, whitefish and red snapper — from Chennai. San Qi, atop the Four Seasons Hotel in Mumbai, stays relatively close to home with fish from the Philippines and Dubai. Mumbai’s Shiro restaurant flies in some fish from Japan, but gets the majority of its produce from Chennai and the Philippines.

In India, the fishing industry still relies on local fisherman, who take out local boats, often just with a pole or line, or pull in their nets by hand. “If anything,” says Hamid, “certain species may have plateaued, but nothing has reached a critically low level. Lack of regulation, especially in the high seas, is the biggest threat to sustainable fishing in Indian waters.”

In contrast, says Sato, in Japan, the fishing hotbeds and scallop farms have been destroyed by decades of overfishing, and some fish are extinct. “Yes, the tsunami destroyed the fishing boats and man-made tools, but the real damage was done years earlier.” Trenor agrees: “The way we fish is changing.  Boats are going farther, fishing deeper. We literally have nowhere else to go.” 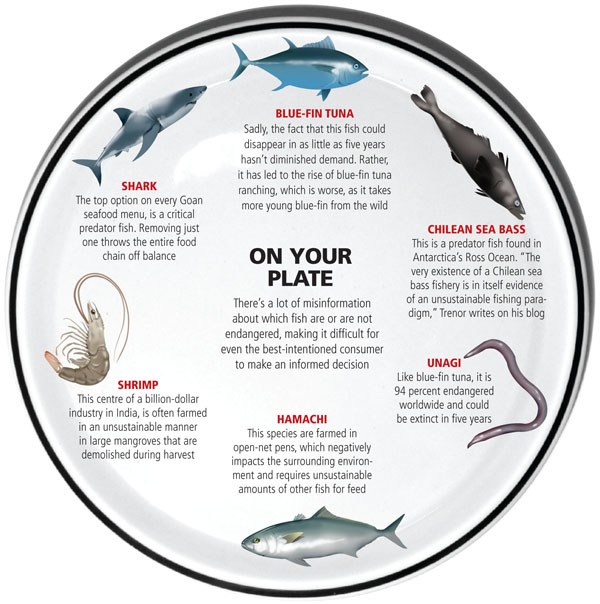 Infographic: Sameer Pawar
The solution, believes Sato, lies in reviving local fishing. “Local fishermen don’t have the infrastructure and the invasive fishing boats that deplete the ocean before the fish have a chance to reproduce. Locals have smaller nets, and smaller fish have shorter life spans. These are the fish that reproduce more quickly,” says Sato, pointing to the 2006 Science study that reported a dramatic recovery of species — and, consequently, the ecosystem — in 48 protected marine reserves.

Ironically, as the more developed commercial fishing industries pay the price for overfishing their oceans, India is emerging as a major seafood exporter, earning more than $2 billion in 2009-10, according to the Marine Products Exports Development Authority (MPEDA). According to reports, demand for Indian seafood, especially black tiger shrimps, has increased even in Japan, which accounts for 15 percent of Indian exports after the US and European countries, as fears about local seafood contamination linger.

“Sustainable sushi is a new idea, but it has taken off quickly,” says Trenor. On the footsteps of Tataki, six more sustainable sushi bars have opened up in the US. “We have seen the number of major retailers of orange — one of the most environmentally devastating fish commonly available in the US seafood market — roughly drop from 18 in 2008 to eight in 2011,” he says, adding that a number of retailers have dropped other damaging species like Chilean sea bass and shark, and started to involve themselves in positive political initiatives designed to promote conservation.

So what lessons can new sushi lovers learn from this story? First, be savvy when ordering off the sushi menu. Don’t hesitate to ask the chef where the fish comes from, and how it’s raised. Next, ask for something local and seasonal, which supports the local fisherman and fishing industry and, in India’s case, sustainable fishing practices. Finally, don’t be afraid to try something new. “Any type of seafood is endangered if you’re going to overfish from that population,” Sato explains. “Don’t think, ‘this is really similar to hamachi’. Otherwise that’ll be the species to go next. The fish you’ve never heard of might be even better. Experience everything on the menu. That’s life.”

“We need a divorce from the unthinking dependence on black box sushi,” Trenor adds, urging chefs to reward customers with original sushi by daring to venture from the typical cookie-cutter menu. “If we don’t get some innovation, we’ll run out of fish.”

(This story appears in the 29 July, 2011 issue of Forbes India. You can buy our tablet version from Magzter.com. To visit our Archives, click here.)