Japan has an amazing array of food. A week in the country and you'll be eating a new dish every day 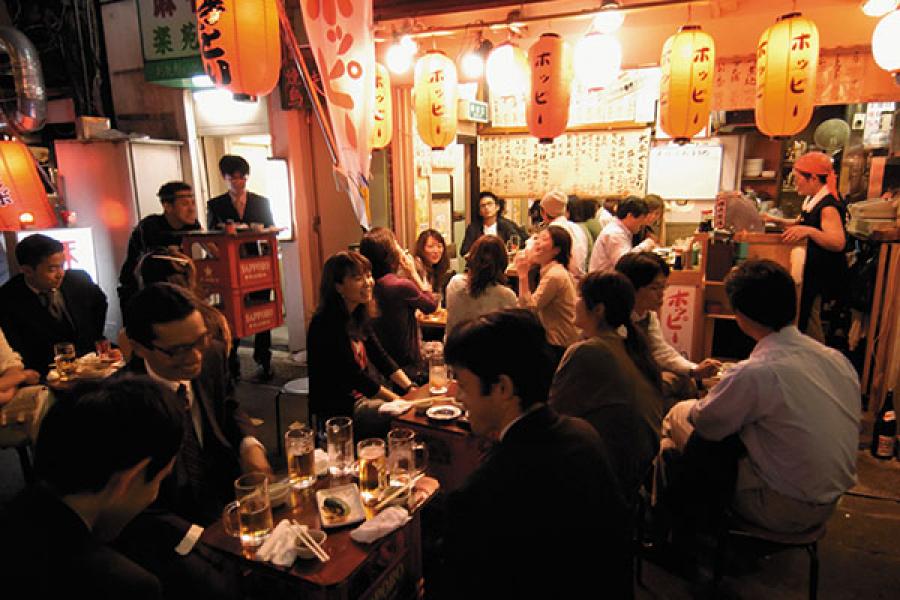 It took us 45 minutes to pick a restaurant for our first meal in Tokyo. And no, it wasn’t for the lack of choice. On a cloudy April afternoon, my wife and I had wandered across a warren of lanes and back alleys in Tokyo’s Shinjuku district, been in and out of at least a dozen restaurants, perused several more menus, but nothing seemed fit for that first meal. Make no mistake,  Tokyo has an incredible array of gastronomic choices and  the Japanese love eating out. Shinjuku has more than its fair share of Irish pubs, Italian pizza parlours and Thai curry places. But we had set ourselves a brief.

Our first meal had to be distinctly Japanese and there could be no sushi. After all, we’d read that Japanese cuisine goes a lot beyond sushi and we had seven days to put that to the test.

We settled on a quiet Japanese fast food joint that had tables so closely packed you couldn’t take more than a step without bumping into one. “Looks like a working class place,” I muttered as we walked in.

We picked a plate of gyoza (Japanese dumplings)—after the waiter did his best to explain in sign language that they were a Japanese specialty and were made of pork—and crossed our fingers.

My history of ordering mistakes with Chinese food has made me wary of Oriental cuisine. I’ve suffered in Beijing, Shanghai and even Hong Kong (which you’d expect to be more cosmopolitan), having asked for a plate of frog legs in oil that I just couldn’t afford a second bite of. Predictably, Japanese cuisine with its penchant for raw food (sushi and sashimi, remember?) made me nervous.

I fought a feeling of trepidation as I saw the waiter walk up to my table. But the familiar aroma of pork mince, cooked of course, put it to rest. One bite and I knew gyoza had ticked all the right boxes. 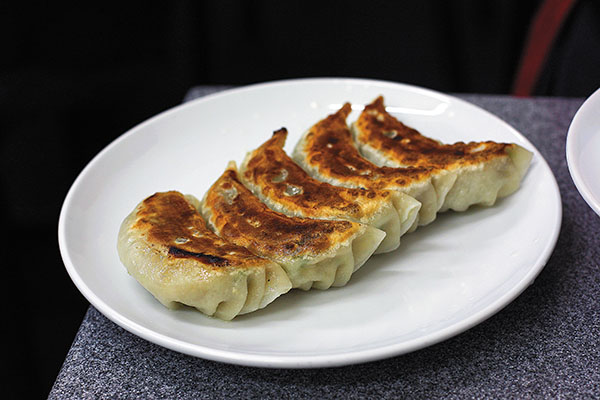 The dumplings were steamed and fried at the same time, giving them a lovely texture: Crispy edges complementing the lovely, soft mix of meat and vegetables inside. If gyoza was the sign of things to come, I had reason to be hopeful of a varied culinary journey.

Unlike Chinese cuisine that comes in an amazing array of meats and sauces, Japanese cuisine (and culture as a whole) is far more homogenous and the flavours sedate. The upside: We rarely made a wrong ordering decision during our trip.

Despite its daunting skyscrapers and vast expanse, it’s easy to feel at home in Tokyo. With its large expat population, finding your way around is not a problem. The signboards are bilingual—English and Japanese—and we found people more than willing to help us once we pulled out our phones and pointed to Google Maps. Five out of every 10 people we met spoke English, unlike in 1999, when I visited Japan for the first time, and there would hardly be any, well, conversation.

But still, there were some things that didn’t change. The Japanese are a stickler for efficiency and it’s visible from the moment you touch down. No queues at immigration and fast trains that whisk you to the city centre in 60 minutes. Even after a long journey, you arrive in Tokyo refreshed. 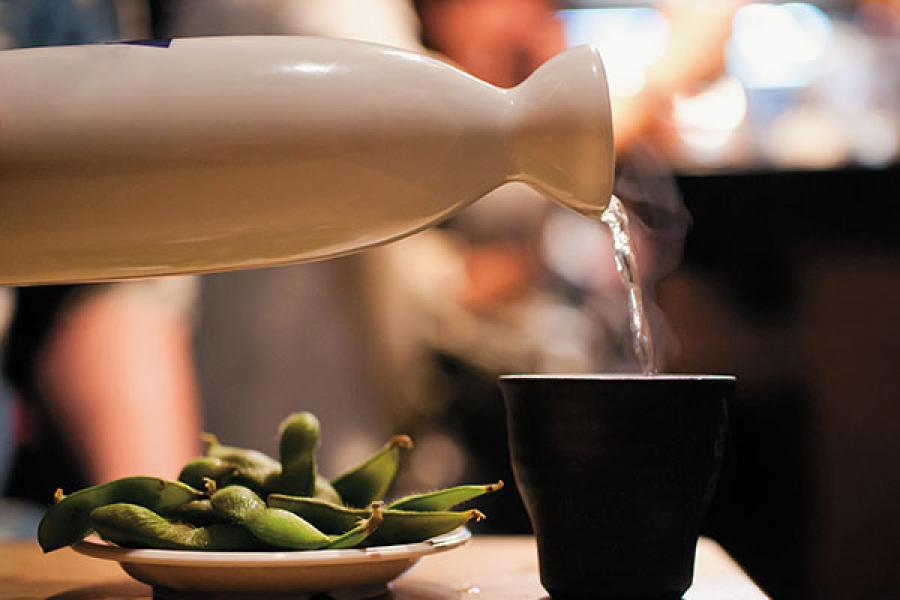 Image: Getty Images
Warm sake being poured into an ochoko
The same evening, as the temperature dipped to 10°C, we decided to go out and open a bottle of sake. Made from fermented rice, this alcoholic beverage is more potent than wine and a small bottle has sent many a Japanese man stumbling home, or elsewhere. Perhaps that is why you usually pour no more than a couple of sips at a time into an ochoko (a small cup).

It was at the restaurant where we had stepped in for sake that we were introduced to yakitori (grilled chicken usually served on skewers). I know what you are thinking: Grilled chicken is, after all, just grilled chicken. But wait till you’ve tried the bewildering variety of sauces and flavours they serve it with. We chose to begin conservative with soya sauce and vinegar. But as the evening progressed and the sake began to perk things up, we got more adventurous. Who knew grilled, tangy chicken would taste heavenly with cheese and pineapple? As plate after plate were ordered, I began to wonder if we’d make it home in one piece. We took our chances. With a light drizzle outside, we polished off a couple of tumblers of sake and still managed to make it back to the hotel. Yes, to our hotel.

If there’s one dish that Japan has a veritable love affair with, it’s noodles. After all, the Japanese introduced cup noodles to the world. Momofuku Ando’s invention in the 1970s and the launch of Nissin, a $30-billion company, made instant noodles a household name across the world. You might have grown up on bowls of noodles in India, but there’s no way you can visit Japan and not have more of it. 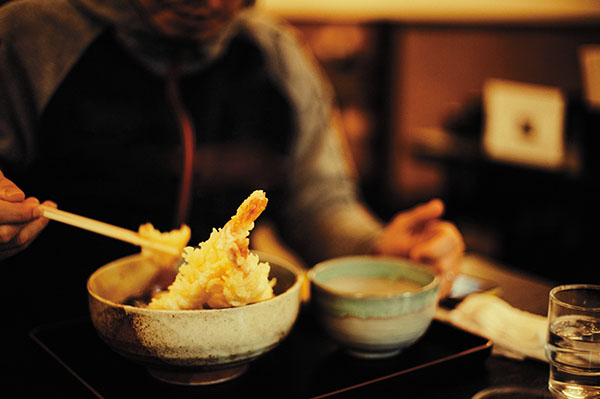 Ramen, udon and yakisoba were what we got our chopsticks dirty on. Yakisoba, literally fried buckwheat, comes topped with vegetables and a fried egg. Available everywhere from restaurants to streetside stalls, not unlike the chowmein carts we have in India, they’re easy to make and can be had hot or cold.

The Japanese fetish for automation has given rise to food courts where cash is not exchanged. Vending machines outside have photos of your dish with the price displayed. You put in your money, take a coupon, walk in and get your food. It was in one such food court in Osaka that I had my favourite noodle dish: A bowl of ramen or soupy noodles. These wheat noodles are served in broth made of meat or fish and are flavoured with soya sauce or miso (a traditional Japanese seasoning). Toppings like dried seaweed or green onions add a briny tang and crunch to the dish. The Japanese usually break a raw egg and add it to the broth but I couldn’t get myself to do it (I’d rather have mine sunny side up, thank you very much).

And finally, there was udon—a thick wheat noodle usually but not always served with soup. Japan is dotted with restaurants that serve only udon. They can be had in a variety of ways. Hot or cold, with various types of meat. With soup (yes, it’s OK to make slurping sounds while eating) or without soup. It was a dish we found goes best with tempura, that is sea food or vegetables that are dipped in batter and deep fried. The prawn tempura is a universal favourite. And with good reason. 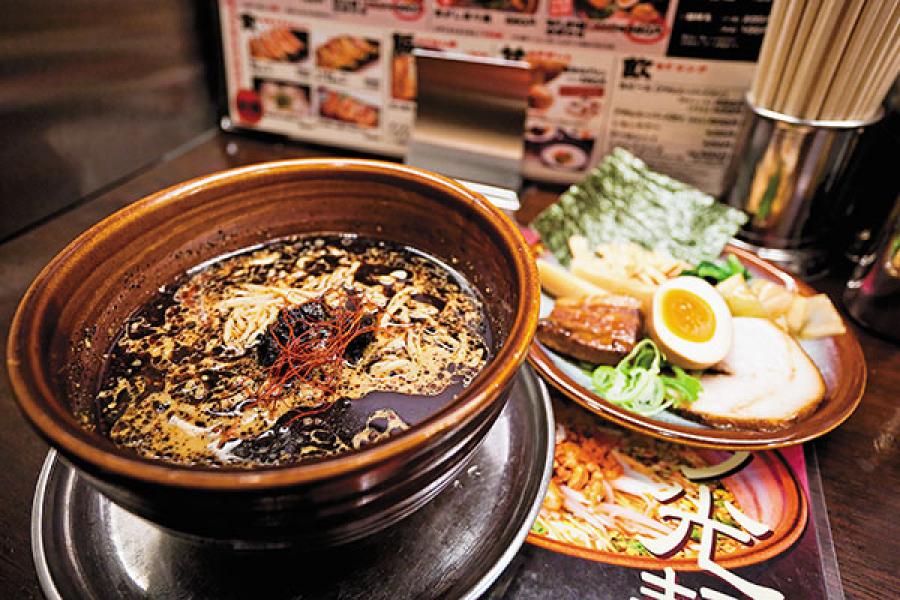 Image: Getty Images
Ramen noodles with toppings
Towards the end of our trip, we walked across to a place that displayed in bold the magic words that can make Indian hearts sing: CURRY.

We ordered two plates, but were sorely disappointed. Japanese curry is nothing like Indian curry, not even remotely. When our two plates of curry arrived, we regretted our decision instantly. It was a plain vanilla soup that seemed to have been tempered with instant mix masala. Meanwhile, on a table close by, a large group of American tourists ooh-ed and aah-ed over each spoonful.

But this didn’t cast a dampner on the last leg of my visit, thanks to two typical Japanese dishes. First, the Japanese grill. Much like the Korean grill, the Japanese version comes with marinated meats and a gas grill on the table itself. You order your meats, grill them and add sauce to flavour. My all-you-can-eat plate had everything from chicken to pork and beef and intestines to liver and brain. Be sure not to undercook them. And don’t be scared to experiment with sauces. I wager you will leave licking your fingers and keep coming back for more.

An evening at a Japanese grill is the favourite hangout for office-goers, so be sure to get in early. Tables are booked for the entire evening and it can be hard to grab a spot after 8 pm.

However, the best was saved for the last when we discovered highballs. Across Japan, we’d seen people drinking alcohol from unusually tall beer mugs, possibly sacrilegious for purists. At a Tokyo bar, my wife walked up to a bartender, who spoke no English, and pointed to the drinks. He allowed us a taste, pouring out the two that we liked best. We experienced our highballs and the highest point of our culinary journey. 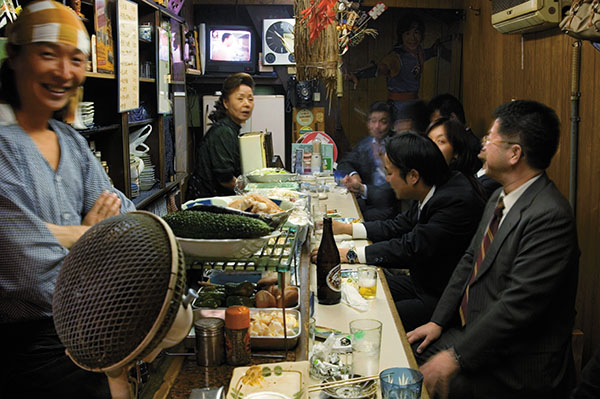 Made of whiskey and a non-alcoholic base, highballs became the rage in Japan about five years ago (after whiskey drinking declined remarkably in the 1980s and the ’90s) when Suntory, a company that makes an eponymous award-winning whiskey, embarked on an advertising campaign to popularise the drink. (The earliest highballs were made in Scotland—they’re simply whisky and soda.) In Japanese bars, highballs are served with Suntory whiskey and a wide array of bases—from cola, to lime and orange juice, what have you.

You could call highballs ‘just a cocktail’, but there’s something distinctively Japanese about it. In Japan, you can’t miss Suntory ads when you walk into a bar. The drink is so popular that it’s not unheard of for people to have between five and 10 highballs an evening and totter home. When you see large groups of office-goers stumble out of restaurants post-midnight, you’d know it’s the highballs.

As we made our way back to the hotel that night, I realised there’s so much more to Japanese food than what we’ve seen or heard. The common refrain when we planned our trip was, “Why Japan? Oh, that must be similar to Singapore or Hong Kong. Why go so far?” Spend a week and you’ll know you couldn’t have been more wrong.

Both for the food and the country.

Tweets by @forbesindia
My Moscow: Devendra Kumar Vyas's guide to the city
Till the End of Time: The Best Calendar Watches