U.N. Security Council rejected a Russian resolution on Ukraine's suffering that did not mention the invasion 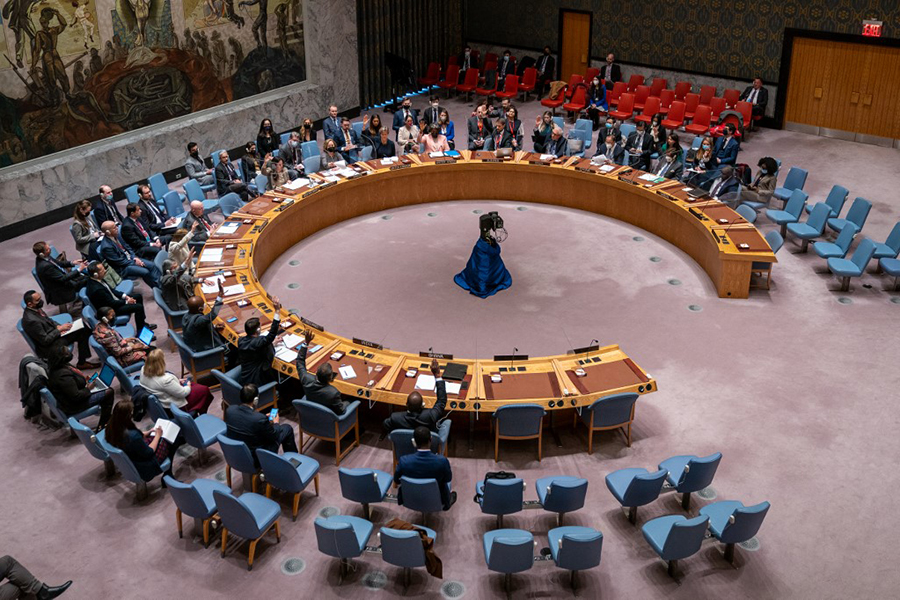 The United Nations Security Council on Wednesday soundly voted down a Russian resolution that said there was a growing humanitarian crisis in Ukraine leaving millions in need of food, water and shelter but failed to mention it was Russia’s invasion that had caused it. Image: David Dee Delgado / Getty Images North America / Getty Images via AFP)

The United Nations Security Council on Wednesday soundly voted down a Russian resolution that said there was a growing humanitarian crisis in Ukraine leaving millions in need of food, water and shelter but failed to mention it was Russia’s invasion that had caused it.

“It really is unconscionable that Russia would have the audacity to put forward a resolution asking the international community to solve a humanitarian crisis that Russia alone created,” said Linda Thomas-Greenfield, the U.S. ambassador to the U.N.

The vote came as the General Assembly reconvened an emergency session to hear a resolution submitted by Ukraine with the backing of 90 countries — including the U.S. and its European allies. The resolution called out Russia for causing the crisis, urged a cessation of hostilities and focused on the protection of civilians and civilian infrastructure, humanitarian aid access and potential spillover from the conflict in terms of food insecurity.

“We ask all those who stand against the war to vote with us,” said Sergiy Kyslytsya, Ukraine’s ambassador to the U.N. “It will send a powerful message to stop the humanitarian crisis and make the aggressor stop its war.”

In just one month, the war has displaced 10 million people and trapped millions more in the crossfire, in many places cut off from water, electricity, food and medicine.

Russia’s ambassador, Vassily Nebenzya, said Ukraine’s resolution, which has the support of the United States and its European allies, was “false” and “one dimensional” and would not help the situation on the ground, urging countries not to cave to what he called was pressure from the West.

“This is how we have found ourselves in another political anti-Russian show, set this time under allegedly a humanitarian context,” Nebenzya said in his speech to the Assembly.

To the surprise of many countries, South Africa also submitted a resolution — without broad consensus — that called for the protection of civilians and humanitarian aid but omitted mention of Russia as the aggressor in the conflict.

With at least 70 countries requesting time to deliver statements about the resolutions, voting was not expected to take place until Thursday.

Unlike votes at the Security Council, those at the General Assembly are not legally binding. But they do carry political weight and will signal the level of Russia’s isolation.

Tweets by @forbesindia
IPL 2022: Will Rajasthan Royals 2.0 slay goliath again?
Momos, idlis and a pinch of salt: Can Zomato deliver on time?