Russian forces have been striking the northern suburbs persistently since the first day of the invasion, when advance units managed to reach the city's center, only to be killed in a firefight 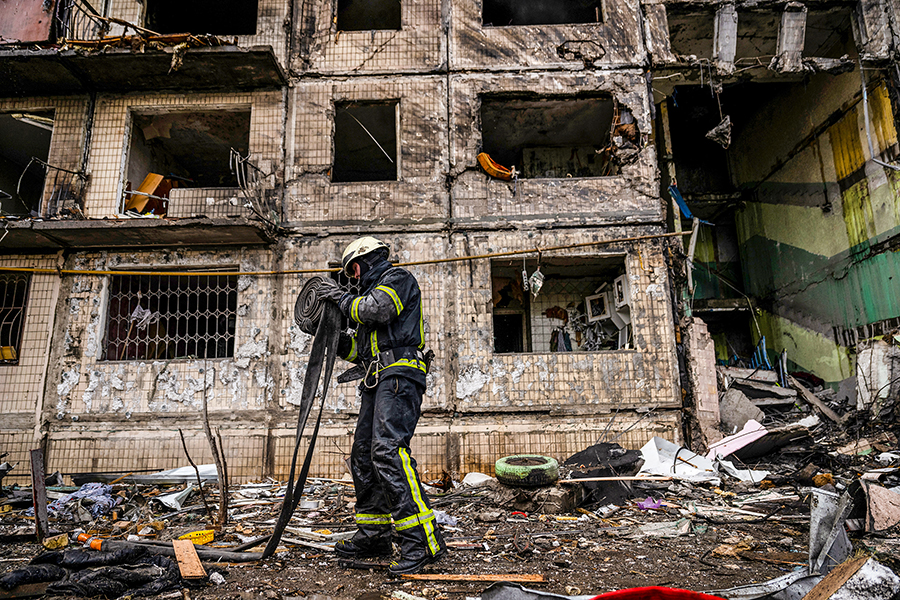 Emergency workers extinguish flames and help residents after their apartment building in the Obolon district of Kyiv, Ukraine, was struck by artillery shells on Monday, March 14, 2022. With civilian areas coming under fire and an estimated half the population having fled, the avenues of the Ukrainian capital, under siege by Russian forces, are almost deserted. (Lynsey Addario/The New York Times)

KYIV, Ukraine — The Ukrainian capital feels almost empty, its wide avenues mostly deserted except for soldiers at sandbagged checkpoints on the main intersections.

But it is a sprawling city where an estimated 2 million people are still residing — half its prewar population — in miles of residential areas and apartment blocks that span the two sides of the Dnieper River.

When an artillery shell slammed into an apartment building in the Obolon district in the city’s north just after dawn Monday, many residents were jolted from sleep. After more than two weeks of bombardment in the capital, they had grown used to the sound of artillery strikes — but they had never thought their building would be a target.

“We do not have a military target near us,” said Yuriy Yurchik, 30. “We did not think we ourselves would be a target.”

In a flash, a single shell at 5 a.m. struck the apartment block and killed one person, wounded 10 others, and left 70 others shaken and homeless.

Hours later, just a few miles away in the Kurenivka neighborhood, the remnants of a rocket hit a street as shoppers lined up outside a kiosk for sausages and milk and a taxi ferrying a customer passed by. One person was killed and six were wounded there.

Russian forces have been striking the northern suburbs persistently since the first day of the invasion, when advance units managed to reach the city’s center, only to be killed in a firefight.

In some outlying districts, the two sides are fighting at close quarters as Russian forces probe Ukrainian defenses. One American journalist died and a second was wounded when their car came under fire in the district of Irpin on Sunday. Three Ukrainian soldiers also died in the same area.

As Russia has stepped up its air attacks around the country, and Ukrainian air defense systems have been shooting down incoming missiles, residents on the ground sometimes find themselves caught between a bewildering array of sudden explosions.

At the apartment building in Kyiv’s Obolon district early Monday, it was an artillery shell, city officials said. In the Kurenivka neighborhood later that morning, it was the remnant of a rocket. And at a shopping center in the western part of the city, it was another artillery shell.

Yet, even as explosions sounded off in the middle distance and the roar of rocket launches pierced the air, people in Obolon, in northern Kyiv, walked to shops and gathered outside a bank hoping to draw their pensions.

Yuriy Yurchik, 30, was asleep at home when the apartment building was hit. He was woken by a white flash before the sky suddenly filled with an orange light and a loud explosion rocked the building. He hid under his blanket as the windows shattered and glass blew across the room.

“I looked out and saw the left part of the building was burning, and on the ground people were running and screaming,” he said.

His grandparents were sleeping across the hall, and the blast tore their bedroom door from its frame and hurled it into their room. “You sleep with your ears open,” said his grandmother, Tatyana Fedun, 69. “I was thrown into the air.”

After the blast, the family gathered their things and began to make their way down to the street. Fedun’s husband, Yuriy, 74, a former welder, is partially paralyzed from a stroke and walks with difficulty. But he seemed unfazed by the explosion.

His wife gathered their medicines. Yurchik, a computer scientist studying for his doctorate, spotted flames and grabbed the family’s documents, his laptop and his doctoral dissertation.

“We had some things ready, but we had to take more,” he said.

Firemen outside were dousing the fire and carrying the wounded out on stretchers. Yurchik’s father, a security guard at a nearby secondary school, was waiting and rushed them into the school basement with other survivors.

The Ukrainian authorities evacuated 70 people from the building, bringing them to a nearby kindergarten.

“They caused us a very great pain,” Tatyana Fedun said of the Russian forces who unleashed the missile strike. “Why? Why do they come to this small place? Russia is so huge.

“What do they want to achieve? Attacking us will not solve their problems.”

Resting later in an underground shelter on the other side of the city, she sorted her medicines and sighed deeply. Her husband sat beside her, leaning on his walking stick and walking slowly up and down the room.

His wife said she thought that the attack on her apartment building had been deliberate, since there were no military or strategic targets in the area, and that the Russians’ goal was to spread panic.

Her husband put it more succinctly: “It is their ambition.”

Back at the wrecked apartment building, the fire was out and Yurchik’s father, Konstantin, was sifting through his damaged home. A mechanical engineer and Soviet army veteran, he said he would not flee.

It was the first time the immediate neighborhood had been hit, he said, and he bristled at a suggestion that the area was becoming too dangerous. He had protected 13 displaced people overnight in the school basement, and he said he will keep doing so.

And now the government has promised the men in the area weapons, he said. “I will take up arms,” he said. “My house is there.”

His son said he would stay, too. One of his friends has already joined the territorial defense forces.

“If there is a choice,” he said, “I will stay and defend, because it is our territory. And God is on our side. We did not hurt others, they invaded us.”

“But it is a pity to begin your day checking who is alive,” he said.

Tweets by @forbesindia
Photo Of The Day: Right to practice religion
Vijay Shekhar Sharma was once the poster boy of India's fintech revolution. Now it all seems to be crashing down