More than 100 Ukrainian soldiers have been killed by Russian forces invading its neighbouring country, while explosions were heard in Kyiv, the capital city 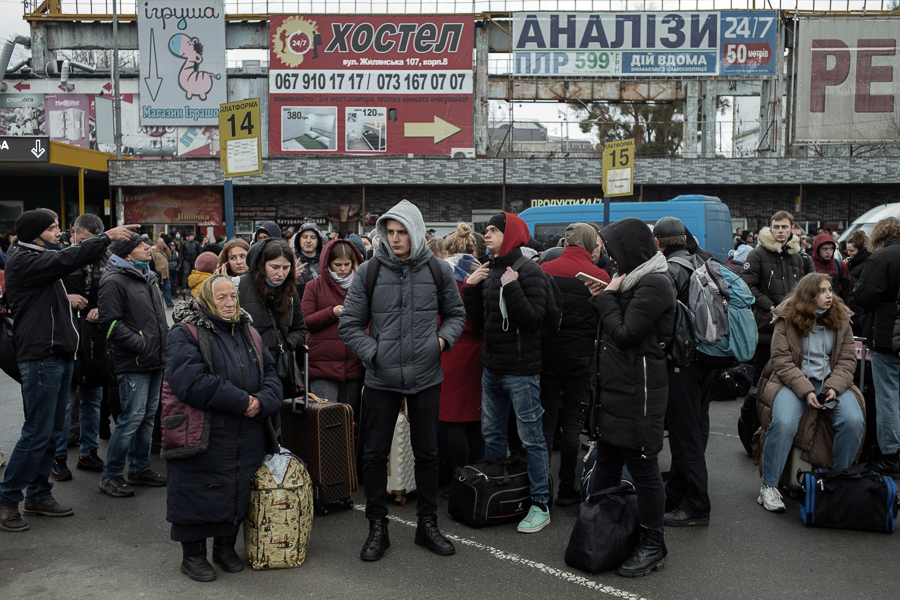 People line up at a long distance bus station in the center of Kyiv, Ukraine, on Thursday, Feb. 24, 2022. A mass migration appears underway as residents flee the capital. (Emile Ducke/The New York Times)

SLOVYANSK, Ukraine — Russia continued its attack on Ukraine early Friday, one day after it invaded the country by land, sea and air, killing more than 100 Ukrainian soldiers and civilians and ominously touching off a pitched battle at the highly radioactive area around the Chernobyl nuclear reactor that melted down in 1986.

Videos verified by The New York Times showed a large explosion in the sky over the outskirts of southern Kyiv, the capital, around 4:20 a.m. Friday. Witnesses filmed fiery debris falling over parts of the city, and videos appeared to show at least two surface to air missiles being fired from Kyiv before the explosion.

On Thursday, Day 1 of the first major land war in Europe in decades, the Russian military began its attack before sunrise with the terrifying thud of artillery strikes on airports and military installations all over Ukraine. A senior Pentagon official said that three lines of Russian troops and military forces were moving swiftly toward Ukrainian cities — one heading south from Belarus toward Kyiv; another toward Kharkiv, in northeast Ukraine; and a third toward Kherson in the south, near Crimea. The forces were using missiles and long-range artillery, the official said.

By Thursday’s end, Russian special forces and airborne troops were pushing into the outskirts of Kyiv. While the ultimate goal of Russian President Vladimir Putin and his generals remained unclear, U.S. officials assessed that the end game was likely the replacement of President Volodymyr Zelenskyy’s government with a Russian-controlled puppet regime.

Early Friday morning, Zelenskyy remained in place as commander in chief, and Ukrainian forces, which officials said had shot down several Russian jets and a helicopter, were engaged in fierce battles all along a broad front line to maintain control over their country.

In a short video message addressing the nation, Zelenskyy, unshaven and wearing a T-shirt, added that Russian saboteurs had entered Kyiv and that he was “target No. 1” for Russian forces, followed by his family.

Vitali Klitschko, the mayor of Kyiv, said on Thursday that he was prepared to take up arms to defend against Russia’s invasion. “I don’t have another choice — I have to do that,” Klitschko, 50, a former boxing champion, told a reporter from “Good Morning Britain.”

The lethal realities spurred tens of thousands of Ukrainians to flee by car or bus on Thursday toward the far-western part of the country, which was deemed safer, snarling the roads, and creating long lines at gas stations.

The day also ended with Russian forces in control of the facility at Chernobyl, according to Mykhailo Podolyak, an adviser to the Ukrainian president’s office, though the condition of the plant and its nuclear waste storage facilities was unknown.

The invasion prompted an immediate outcry around the world and — to a lesser but still surprising extent — across Russia itself.

President Joe Biden denounced Putin for launching a “brutal assault on the people of Ukraine,” and added, “Now he and his country will bear the consequences.”

He said the United States was freezing trillions of dollars in Russian assets, including the funds controlled by Russian elites and their families, and that it would restrict Russia’s access to high-tech imports, impairing their military and their industrial capacity.

He also said the U.S. would send more troops to Eastern European countries in the NATO alliance.

“This aggression cannot go unanswered,” Biden said. “If it did, the consequences for America would be much worse. America stands up to bullies. We stand up for freedom. This is who we are.”

In a somewhat troubling sign for Putin, thousands of Russians defied the rule stipulating that protests consist only of lone pickets, a measure Putin had pushed as he moved to undermine most opposition groups.

Chanting “No to war!” people took to the streets from St. Petersburg to Siberia, in more than 50 cities overall, according to OVD Info, a rights group, which said that more than 1,700 protesters had been arrested nationwide.

Few Russian political or business leaders dared question the move, but some famous singers, theater directors and television personalities criticized the war, risking their access to state money and broadcasts.

Still, Putin was resolute. In a rambling early morning speech, he made clear that his ambitions extended beyond Ukraine and included upending the American-led world order. He denounced what he called the United States’ “empire of lies.” And he threatened severe consequences for any country that tried to interfere with him, ominously reminding the world that Russia “remains one of the most powerful nuclear states.”

The invasion rattled markets early in the day and sent oil prices soaring, at one point past $105 a barrel. Energy prices fell after Biden said the United States and other nations were considering a combined release of oil from strategic reserves, and the S&P 500 rallied to close with a small gain.

Among the most alarming reports of Thursday’s armed conflict came from the toxic marshes of the protective zone surrounding Chernobyl, the site of the worst nuclear accident in history; the shortest direct route from Belarus to Kyiv cuts through a portion of it.

By Thursday afternoon, “national guard troops responsible for protecting the storage unit for dangerous radioactive waste” were “putting up fierce resistance,” Anton Herashchenko, an adviser to Ukraine’s interior minister, said on Facebook, warning of a catastrophe if a shell struck it. Late in the day Ukraine reported that Russia had taken control of the facility.

In the end, the war appeared to be playing out exactly as the U.S. intelligence community said it would when officials first warned about the threatening movement of Russian troops toward Ukraine’s borders last fall.

Russia hit airports and military installations all over the country, shattering glass in nearby apartment buildings and jolting Ukrainian citizens even miles away into a terrifying new reality.

At least 18 military officials were killed in an attack outside the Black Sea city of Odessa, where amphibious commandos from the Russian navy came ashore, according to Sergey Nazarov, an aide to Odessa’s mayor.

Ukraine’s ambassador to Washington, Oksana Markarova, said dozens of civilians had been killed, and pleaded with the world to provide more help.

At the United Nations Security Council, the U.S. proposed a resolution that would order Russian troops out of Ukraine immediately and unconditionally. The resolution, which will likely be voted on Friday, will almost certainly be vetoed by Russia. But approval by a large majority of the council’s other 14 members could reinforce Moscow’s global isolation.

Ukraine’s foreign minister, Dmytro Kuleba, said that the country was facing “a full-scale attack from multiple directions” but that it “continues to defend itself.”

The Russian Defense Ministry said in a statement on Thursday that its forces had destroyed more than 70 military targets in Ukraine, including 11 airfields, three command points and a naval base. Russian forces also downed one helicopter and four Bayraktar TB2 drones, said Maj. Gen. Igor Konashenkov, the ministry’s spokesman, speaking from Moscow. He said that Russia had lost one fighter jet because of a “piloting error.”

By Thursday evening Russian armed forces had reached the city of Kherson, located just south of the Crimean peninsula, and unblocked the North Crimean Canal, said a spokesman for the Russian Ministry of Defense. For Russia it was a major piece of unfinished business, reversing a Ukrainian water blockade imposed after Russia seized the peninsula in 2014.

In total since the beginning of the operation, Russian forces destroyed 83 Ukrainian military infrastructure objects, four fighter jets, one helicopter and four drones, the spokesman said.

Video verified by The Times showed at least half a dozen Russian helicopters flying west over the Dnieper river toward Hostomel, a town on the outskirts of the capital, with some helicopters apparently attacking Hostomel’s airport. One video released by Ukraine’s armed forces appeared to show at least one of those helicopters being shot down.

As horrific as the first day was, the senior Pentagon official said it was only the beginning. Russian troops seen crossing into Ukraine on Thursday represented only a fraction of what the military had deployed along the Ukraine border, the official said.